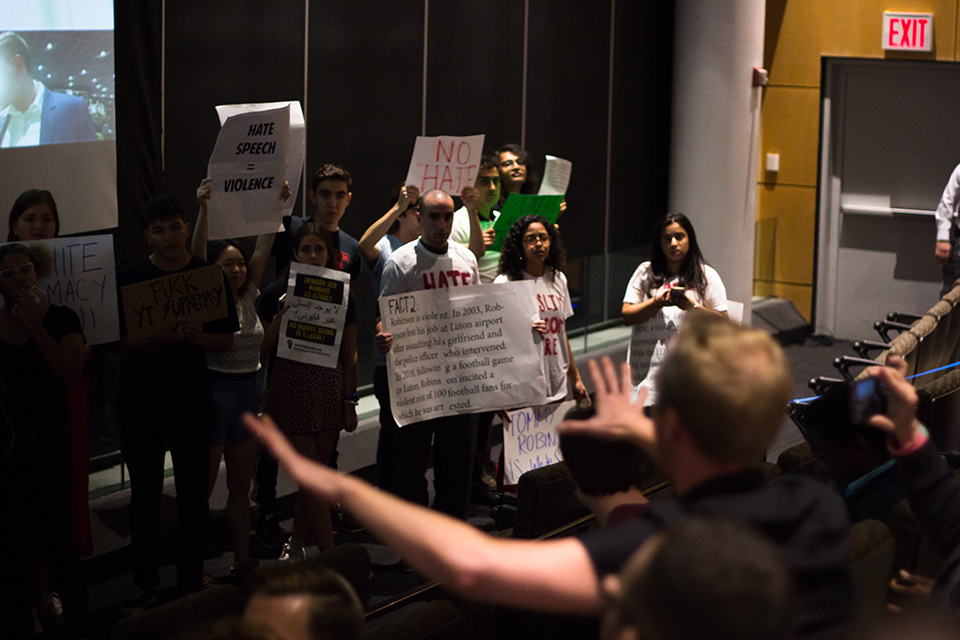 Goldberg’s email comes after over 100 faculty members signed a letter criticizing the “overreaction of the University to student protest."

The charges against a number of students who interrupted an event featuring white supremacist Tommy Robinson last month have been informally resolved by Executive Vice President for University Life Suzanne Goldberg.

Over 30 protesters entered the Lerner Hall auditorium where Robinson was speaking at the invitation of Columbia University College Republicans, interrupting and heckling Robinson and marching on stage while shouting chants.

In an email sent on Monday, Goldberg, who also serves as Rules Administrator, informed students of her decision to “informally resolve the Rules of University Conduct complaint” regarding their conduct at the Robinson speech, and lifted their ban from future CUCR events.

Goldberg’s email comes after over 100 faculty members signed a letter on Sunday addressed to University President Lee Bollinger criticizing the “overreaction of the University to student protest through the aggressive and discriminatory and arbitrary enforcement of the Rules of University Conduct.”

“The administration seems committed to using “free speech principles” as an opportunity to prosecute students for their reasonable efforts to critically engage biased, exclusionary and anti-democratic speakers brought to campus,” the letter said.

A spokesperson for Goldberg declined to make her available for an interview regarding why she decided to drop the investigations, citing a rule that prohibits the University from disclosing information about investigations and adjudications.

Goldberg’s verdict was sent to the students a few hours before conservative media critic and white supremacist Mike Cernovich spoke at Lerner Hall on Monday night at another event hosted by CUCR. Although large crowds of protesters gathered outside Lerner and some inside the event quietly held signs in protest, Cernovich’s speech went on uninterrupted.

Faculty who signed the letter said they were concerned that the rules were being enforced too broadly in a way that could intimidate students and have a chilling effect on protests.

“To be clear, we do not support protest that drowns out a speaker,” Katherine Franke, Sulzbacher Professor of Law, said. “But we condemn the wooden application of Rules of Conduct that police rather than protect students’ right to protest on campus.”

Last week, students under investigation argued in a statement sent to Goldberg that giving a platform to speakers like Robinson and Cernovich constitutes a “genuine threat of harassment to marginalized groups on campus.”

Goldberg addressed this concern in her email, writing, “In this context, harassment must necessarily mean something more than being subjected to expression of ideas that any of us considers loathsome or even dangerous.”

Some students whose charges were informally resolved have asked the University Judicial Board to officially dismiss their charges, overruling Goldberg’s informal resolution.