One year after presidential election, students call on University to bolster its responses to Trump policies

One year after presidential election, students call on University to bolster its responses to Trump policies 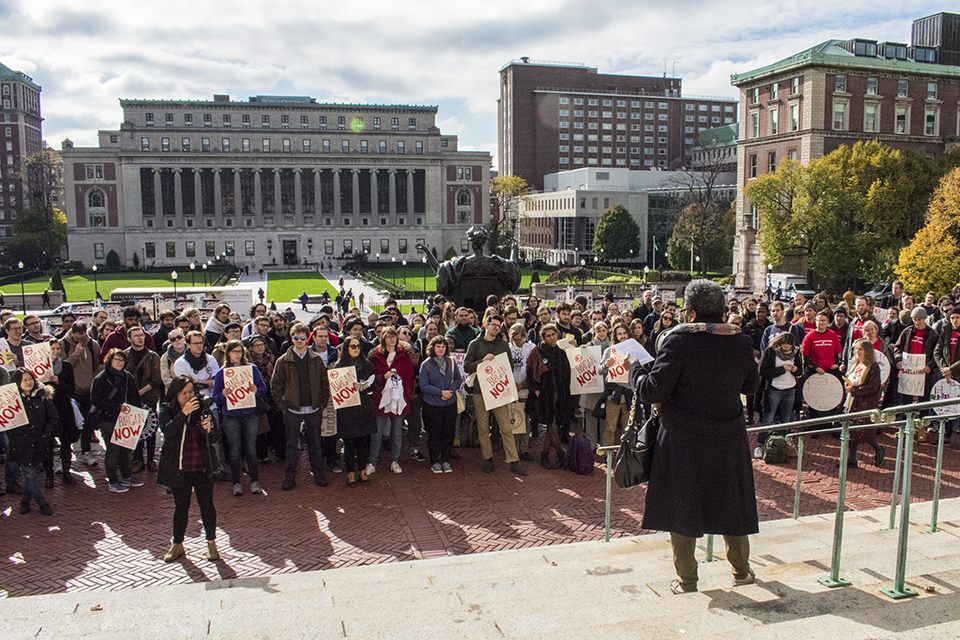 The bulk of demands were made by union members, who called on Columbia to begin bargaining with graduate student unions.

One year after students flooded Low Steps to protest Donald Trump’s election, over 100 members of the Columbia community called on University administrators to bolster support for staff union rights, sexual assault victims, and undocumented students on campus at a rally on Low Steps Wednesday afternoon.

Columbia has taken steps to help students deal with the Trump administration’s policies, including implementing sanctuary measures, offering legal support for those affected by his administration’s travel ban, and promising to stay vigilant on Title IX. However, protesters said that more action is needed.

The majority of the demands were made by union members, who called on Columbia to begin bargaining with graduate student unions. Later in the event, members of other groups spoke, and those in attendance chanted and distributed free merchandise with the slogan “we shall not be Trumped.”

Tania Bhattacharyya, a GWC representative, stood at the top of Low Steps with a megaphone and criticized Columbia administrators for refusing to acknowledgea collective bargaining agreement approved by the National Labor Relations Board last year.

“Even though President Bollinger was publicly disagreeing with a lot of the policies that were proposed by the new administration of this country, he is very conveniently silent on the labor issues,” she said.

“We shall come for you by name; Bollinger you should feel shame,” the protesters shouted, whose ranks swelled as the speeches went on. Calling out both Trump and Bollinger, they marched in a circle around Low Library and congregated peacefully outside Bollinger’s office at Low, after which the protests concluded.

“Our main message was that Columbia is choosing to side with the new appointees of the NLRB rather than recognizing democracy on our own campus. We’re trying to escalate this topic and to make Columbia aware of this growing movement and tell them that we’re not going away,” Brudastova said.

An undocumented student who introduced himself to the crowd as Pablo praised advocates who have continuously pushed for change the past year.

“We didn’t lose that sense of urgency,” he said, as protesters cheered in agreement.