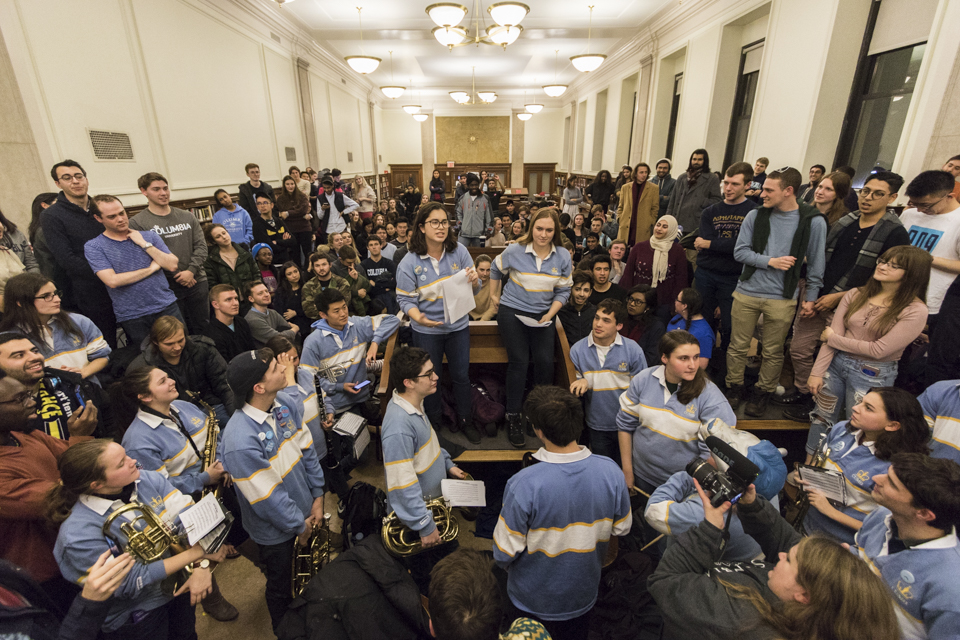 Over 200 students were present by midnight, while over a dozen Public Safety officials stood watch at the entrances to the room.

Hiding instruments and ducking Public Safety officers, the Columbia University Marching Band held its Orgo Night performance in room 209 of Butler Library Thursday night, defying a decision by administrators that has denied them access to the library since last December.

A 42-year-old tradition, Orgo Night features a comedy routine that satirizes campus events from the semester alongside musical accompaniment. The event traditionally takes place the night before the Organic Chemistry final in Butler 209, but for the past two semesters, administrators prohibited the band from playing inside the library, provoking an outcry from current and past band members.

Administrators have cited concerns that Orgo Night disrupts students immediately before final exams as the reason for their decision. While it is unclear whether or not band members will face disciplinary action, the Rules of Conduct prohibit blocking entrances to University facilities or making noise that hinders other students’ academic activities. A University spokesperson could not immediately be reached for comment regarding the performance at the time of publication.

In order to perform inside Butler, the band had to circumvent Public Safety, which was the result of days of preparation, according to CUMB head manager Vivian Klotz, BC ’20.

“It was all about building back from ‘We need to have Orgo Night in 209, so how do we get in?’” Klotz said. “We went in multiple groups, we had shifts, there was a multi-page long plan.”

Band members entered Butler 209 in waves in the hours leading up to midnight, concealing their instruments and gear in backpacks. Larger instruments, such as drums and trombones, were secretly stored in 209 beginning early Thursday morning and were monitored by members throughout the day, Klotz said.

Students began pouring into Butler shortly before midnight on Thursday night, at which point it was unclear whether any members of the band were in the building. Over 200 students were present by midnight, while over a dozen Public Safety officials stood watch at the entrances to the room.

When the clock struck twelve, more than two dozen band members congregated in the center of the room, changed into their CUMB attire, and began playing ‘Roar, Lion, Roar.’ Though Public Safety officials initially closed off both sets of doors to 209, they began letting students into the room after about 10 minutes. Public Safety officers did not stop band members or take down their UNIs as they left Butler after the performance. 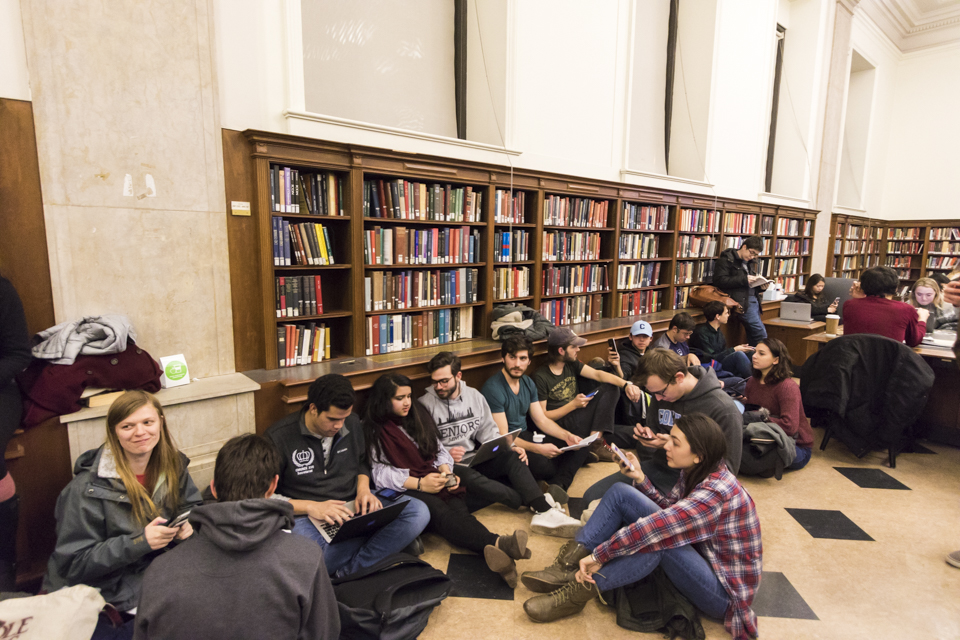 Members of CUMB sit in 209 before midnight.

Dressed in their signature shirts, band members performed in the middle of the room, some standing on chairs and desks to be more visible. 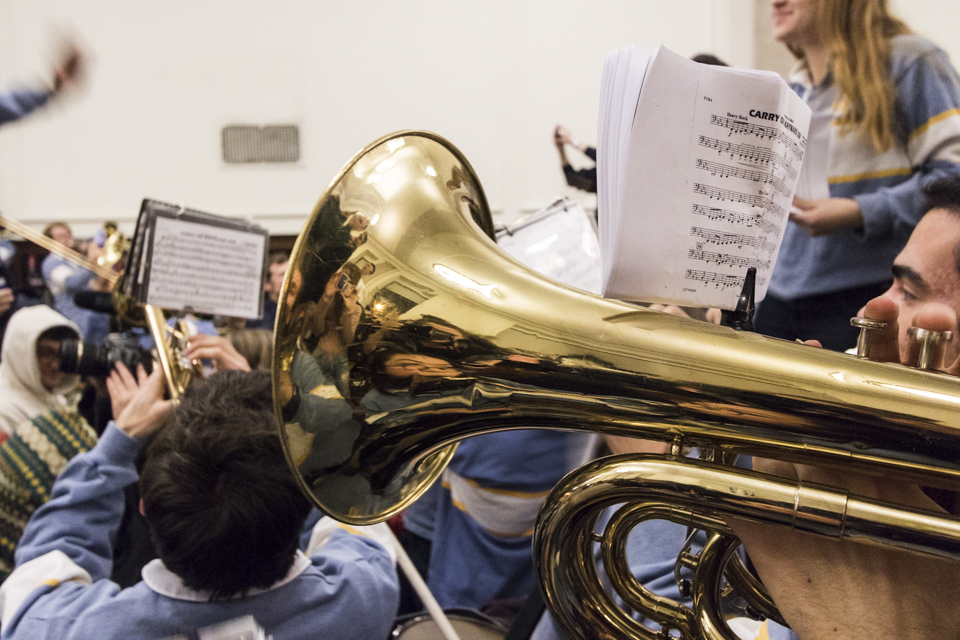 CUMB performed for about an hour. 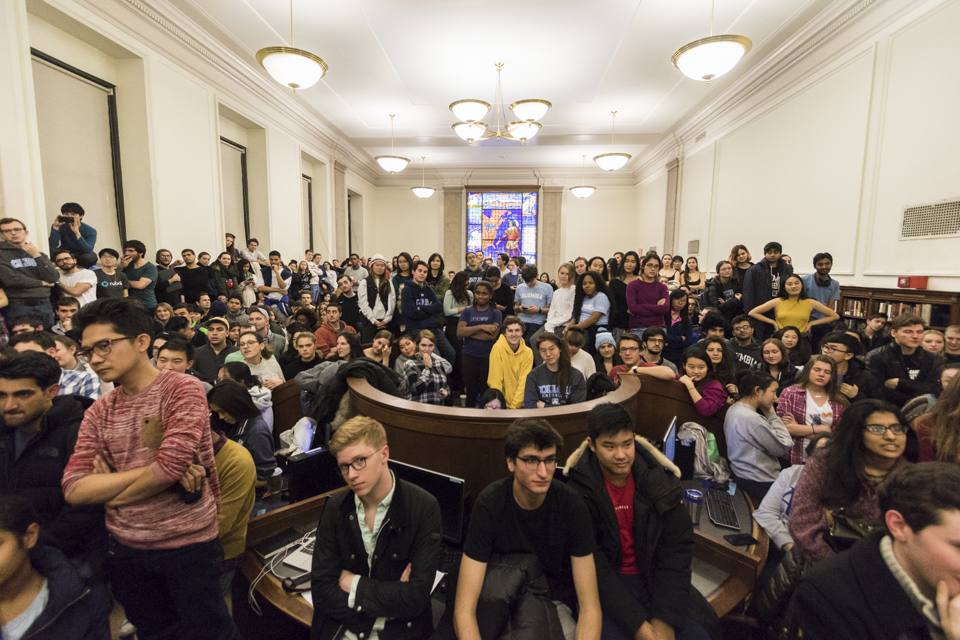 More than 200 people gathered in 209 to watch the performance. 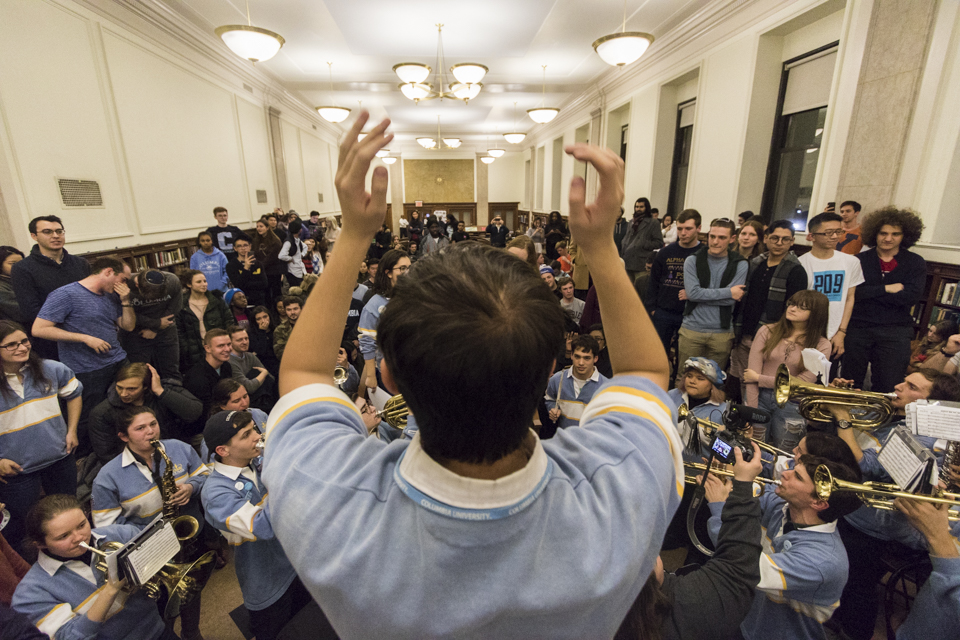 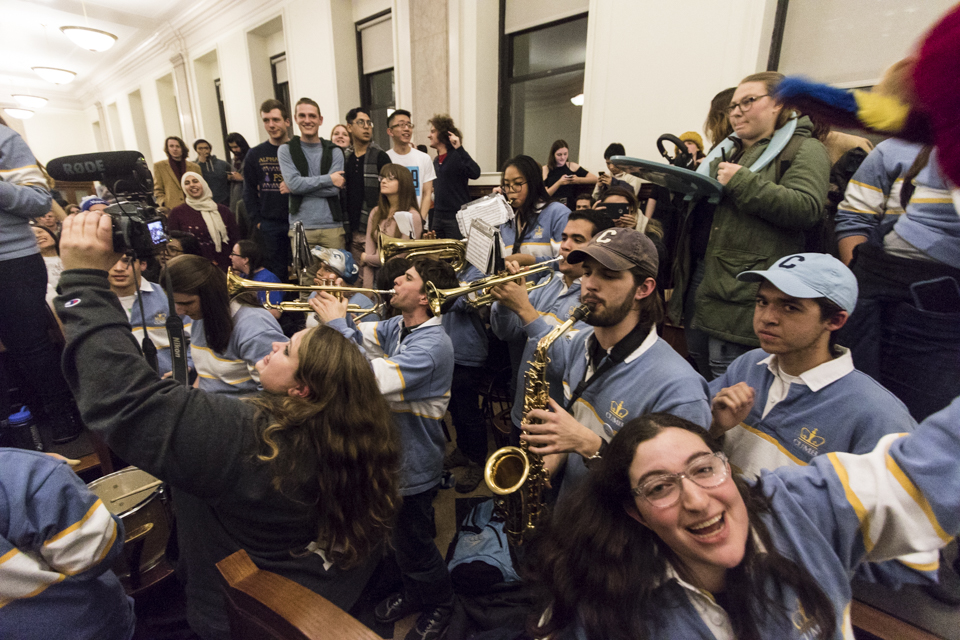 Students and CUMB members alike danced to the music throughout the performance. 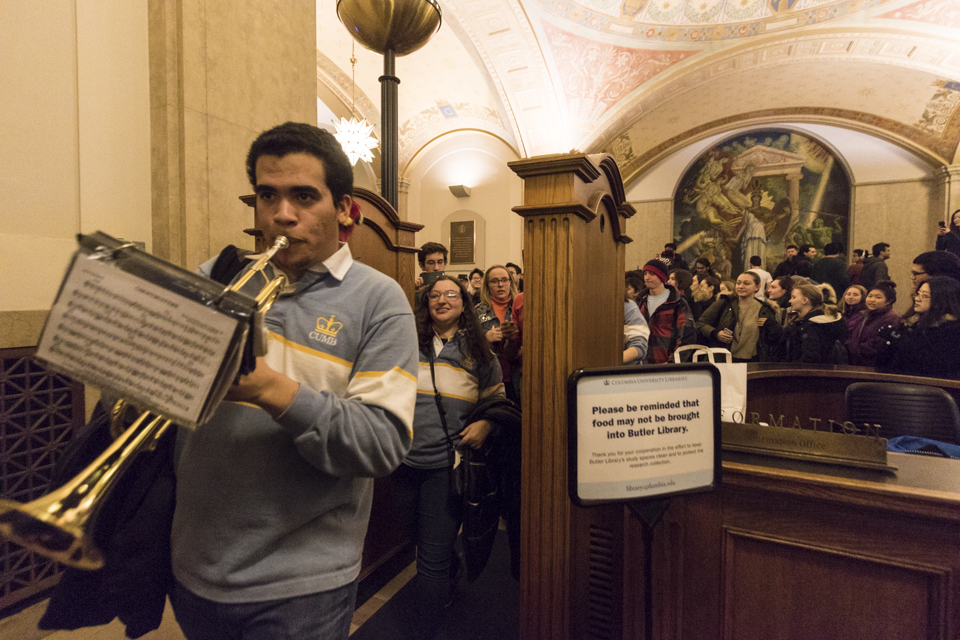 CUMB continued to play music as it exited Butler.

The push to have Orgo Night return to Butler has come largely at the hands of the Columbia University Band Alumni Association, which delivered a petition signed by hundreds to the Office of the University President Lee Bollinger this morning. Since the decision to restrict the band’s access to Butler was made last year, many alumni have responded negatively.

“The administration should be encouraging a beloved tradition that helps students combat the stress that everyone—administrators included—complains about,” Band Alumni Association member Dan Carlinsky, CC ’65, said on Thursday afternoon. “Especially a tradition that they’ve been promoting and using for decades to sell the school to prospective students and to stroke alumni with appeals to the memory of Orgo Nights past.”

Klotz said that band members were made aware of possible disciplinary action before deciding whether to take part in the performance.

“I was well aware that were possibly going to be repercussions because there are very few other instances of big groups of students going against administrative word like this,” Klotz said after the performance. “Yes, we fear repercussions, but right now we’re just planning on having a good time, so there’s not much else we can do.”