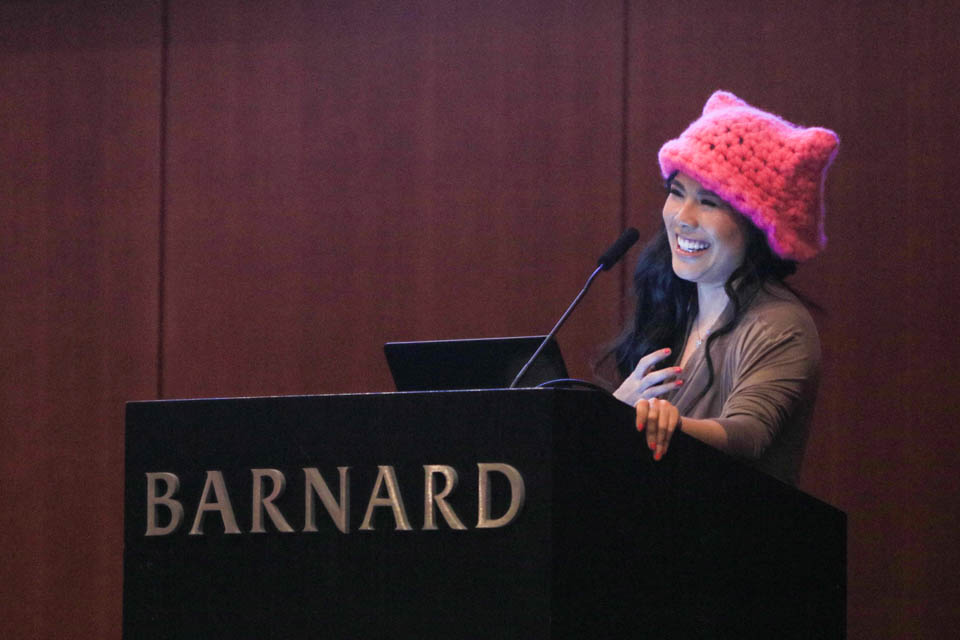 Krista Suh laughs during a speech at Barnard in February 2017.

Krista Suh, BC ’09, creator of the iconic pink pussyhat worn at last year’s Women’s March, visited Barnard on Wednesday to discuss her new book, “DIY rules for a WTF World,” which offers tips and tools to “demolish the patriarchy” and support other women that are doing the same.

The pussyhat, a pink knit hat with cat ears, was worn as a symbol of resistance during the Women’s March on Jan. 21, 2017, the day after President Donald Trump’s inauguration. Suh visited Barnard last February to discuss her role in the march, drawing more than 400 people to hear her speak.

Suh began this year’s talk by explaining the collaborative nature of art and the importance of providing women with supportive environments where they have the security necessary to create. An example of this includes her relationship with MILCK, a singer and songwriter whose song “Quiet” served as the unofficial anthem of the Women’s March and was performed by a chorus at the march in Washington, D.C.

Suh and MILCK have supported one another throughout their careers, Suh said. At Wednesday’s event, MILCK was in attendance to support Suh as well as to perform “Quiet.”

Before singing, MILCK shared the story behind “Quiet,” which was inspired by her experience with abuse and anorexia. While in therapy, MILCK had a dream in which she was abused and afterward told by a bystander to stay quiet. She said this dream inspired the song, but it was President Donald Trump’s inauguration that energized her to release it against her managers’ wishes.

“In real life, I didn’t know how to speak up. I was continuously hiding and making myself smaller for others,” MILCK said. “I didn’t know how to have tough conversations, and my therapist pointed out how ironic it is that as a singer I didn’t have a voice … When I saw the election turn the way I didn’t think it would, I could not keep quiet anymore.”

Suh also discussed her experience as an Asian-American and the pressure she felt to succeed academically and to submit to the wishes of her family.

Hesperus Di Properzio, BC ’21, asked Suh about the idea of reclaiming the word “pussy” after audio was released of then presidential candidate Donald Trump claiming to have grabbed a woman “by the pussy.”

Suh explained that she did not intend for her art to become political but that it naturally was, and that the name was not conceived until after the hat with the cat ears had been made.

After the event, Di Properzio said she would have liked to hear more about the political implications of her work.

However, Suh did discuss one political element of the pussyhat. She addressed the criticism brought up by the transgender community, who claimed it excluded trans women from the movement by equating genitals and womanhood. Some women of color have also criticized the choice of pink because of its exclusive association with white women’s vulvas.

“For critics of white feminism to use [the pussyhat] as shorthand for white feminism even though it’s not how I originally intended as an artist, I can’t control how a person uses it,” Suh said. “It’s important to me to let people use the symbol for what they’re passionate about. Their criticism is not about the pussyhat. It’s about white cisgender feminism and the need to be more intersectional.”