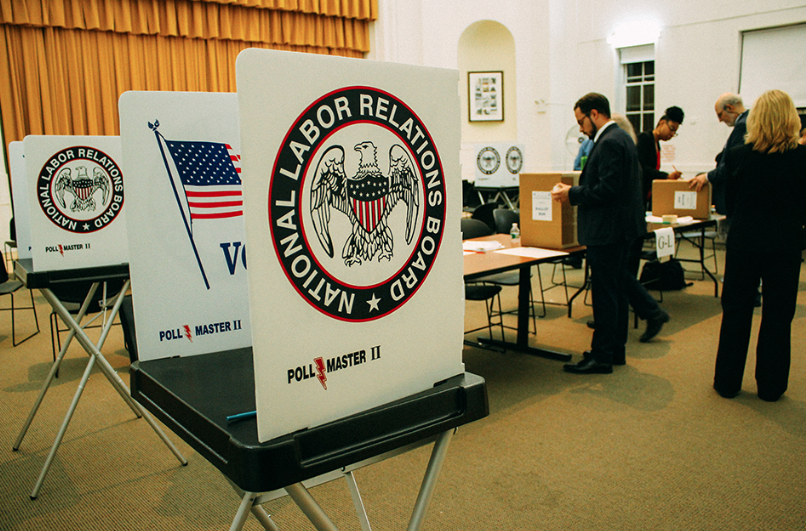 In a landmark case in August 2016, the NLRB overturned the precedent and ruled that graduate students at private universities would be able to unionize.

Columbia has decided not to bargain with graduate students and will instead seek a review of the status of teaching and research assistants in federal court, Provost John Coatsworth announced in a letter to the Columbia community on Tuesday.

In recent months, the University has filed multiple objections to the results of an election in which graduate students voted to unionize last spring. Last month, the National Labor Relations Board ruled against the University’s latest objection, prompting graduate students to deliver an initial bargaining request to University President Lee Bollinger. Columbia’s refusal to bargain on Tuesday is its first official response to that request.

In a landmark case in August 2016, the NLRB overturned the precedent and ruled that graduate students at private universities would be able to unionize, allowing them to seek improved benefits and increased pay.

According to Coatsworth, the University has refused to bargain “until the legal process has been allowed to run its course,” a delay that legal experts predict could take months, if not years.

Members of Graduate Workers of Columbia-United Auto Workers expressed disappointment with the University’s response and are considering filing a charge of unfair labor practice, which would prompt continued litigation.

In response to Coatsworth’s email, which mentioned that the University plans to unroll more “enhancements” for graduate students, union spokesperson Olga Brudastova said she believed that any further measures would not be enough to satisfy union members.

“It’s not solely about the financial side of this,” Brudastova said. “It’s about the power dynamic that is totally unhealthy in academia at large and specifically at Columbia. Whatever they unveil [...] I don’t think it will be enough for any of the organizers or any of the union supporters to stop this fight because it’s not what we are asking for. We are asking for a seat at the table.”

“The effort by the United Auto Workers to unionize graduate and undergraduate students who serve as teaching and research assistants elicits strong views in and outside our community for understandable reasons. At stake, from the perspective of those seeking to establish a union, are promises of higher compensation and improved benefits. Others among us are deeply concerned about what it means to have an outside party involved in what are ultimately academic and intellectual judgments by faculty members.

We are announcing today our decision not to engage in bargaining with union representatives and to seek review of the status of student assistants by a federal appellate court. We recognize the potential, indeed the likelihood, for disappointment and dispute in our community. Needless to say, we have not come to this decision lightly. Because of the principles at stake—principles essential to the University’s mission of training scholars—we have declined to bargain until the legal process has been allowed to run its course. We remain convinced that the relationship of graduate students to the faculty that instruct them must not be reduced to ordinary terms of employment. It is a conviction that, in the end, made this admittedly difficult decision straightforward for us. While the National Labor Relations Board’s position on student assistants has shifted repeatedly with changes in political administrations, the University’s view has remained constant, as has our well-established record of collective bargaining with the several unions that appropriately represent thousands of Columbia employees.

Our concern for these principles and for safeguarding the University’s mission exists alongside our acknowledgment of the concerns students have expressed during the period of union organizing. This is why we have been working productively with the Graduate Student Advisory Council, the SEAS Graduate Student Council, and other student government bodies to address stipend and quality of life issues, and why we will continue to do so. Indeed, within a short time, the University will be announcing a series of new enhancements for graduate students.

In past communications to you about unionization, I have said that we are determined to improve the experience of research and teaching assistants at Columbia because we want to continue to attract the very best graduate students in the world. Our current research and teaching assistants belong to that group of world-class students and future scholars. We have made a lasting commitment to your future, want you to thrive intellectually and personally while you are here, and, therefore, are deeply invested in addressing your concerns. I look forward to continuing to work with you—and for you—in pursuit of these goals.