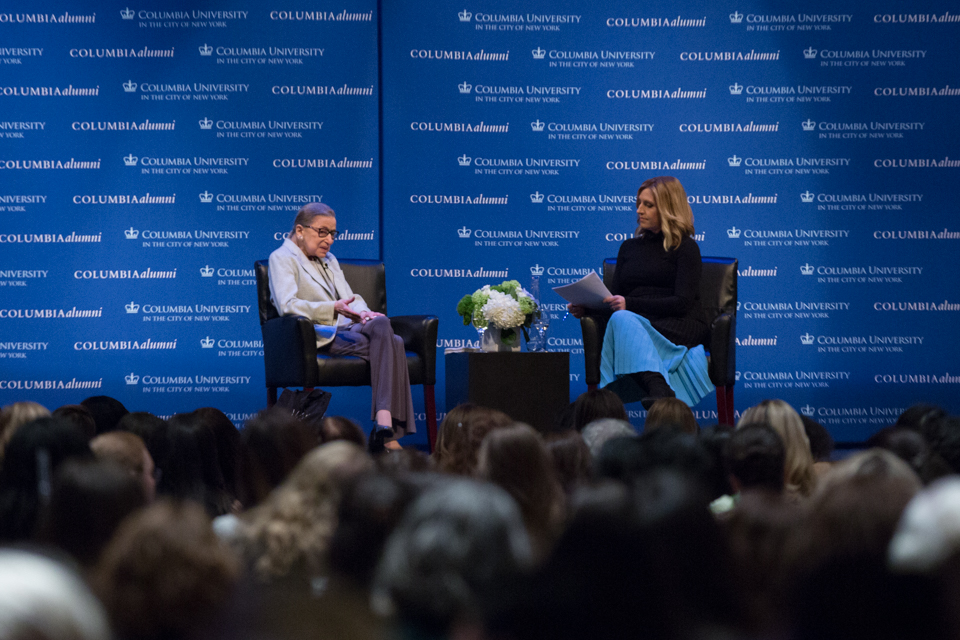 Justice Ginsburg spoke as part of “She Opened the Door,” the first Columbia Women’s Conference, which included a series of events from keynote speakers to leadership workshops that spanned Friday to Sunday. The conference aimed to celebrate women at Columbia and establish a collaborative network between female alumnae across all 18 undergraduate and graduate schools.

The conference’s title is a tribute to Winifred Edgerton Merrill, the first woman to obtain a Columbia degree, which she received in 1886 for astronomy. A portrait gifted to Columbia by Wellesley College, Merrill’s alma mater, to mark her achievement bears the inscription “She Opened the Door.”

Ginsburg was interviewed by Poppy Harlow, CC ’05 and anchor of the show CNN Newsroom, whose questions touched on a range of issues from sexual harassment to equal pay to the difficulties of bipartisanship.

In speaking about matters relating to sexual assault, Ginsburg voiced some concern over how the #MeToo movement should be spreading.

“It shouldn’t stop with the prominent people,” she said. “This new attitude should protect the maid who works at a hotel.”

Still, in comparison to the “boys will be boys” attitude of her college days, Ginsburg said the movement is a healthy development, one in which women are truly being listened to.

During her youth, Ginsburg recalled, women were not just silenced, but placed on a pedestal of domesticity—one that prohibited them from getting their foot in the door, especially in the professional world.

Ginsburg credited her mother, who refused to adhere to convention, for arming her with the strength to persist through challenging circumstances.

“She was unusual for her time because she stressed the importance of being independent,” said Ginsburg. “‘Fend for yourself’ was her message. Be independent.”

Kathleen Crowley, Public Health ’91, Public Health ’13, and Teresa Saputo-Crerend, CC ’87, Business ’92, chairs of the conference task force, said that the project had been underway for over two years.

“We got some fantastic ideas; we had alumnae leaning in and leaning forward and saying, ‘I’d love to be a part of this conference,’” Crowley said.

While the conference targeted Columbia alumnae, about 25 percent of its attendees were undergraduate students, according to a university spokesperson from the Columbia Alumni Association.

Ginsburg, who graduated from Columbia Law School in 1959 as one of just twelve women in her class, was introduced by University President Bollinger. In his introduction of Ginsburg, Bollinger acknowledged the countless contributions she has made to advancing the rights of men and women alike.

“A university-wide women’s conference at Columbia would simply feel amiss without the presence of Justice Ginsburg. In every way that matters, she is the one who has opened the door for all of us,” Bollinger said.

Ginsburg also acknowledged the role her late husband, Martin Ginsburg, played in furthering her professional goals, describing how the couple balanced their careers and childcare, trading off duties to support each other.

While Harlow pressured her to answer questions about the current presidency, Ginsburg refrained from giving any comprehensive views, saying only, “We will get past this time of inaction.”

Ginsburg did, however, express some frustration over today’s political polarization, saying that, at the time she was appointed, there was more of a bipartisan spirit.

Ginsburg’s commitment to bipartisanship was clear in her close friendship with late Supreme Court Justice Antonin Scalia, whose strict conservative views often lead the two to fierce debate. Despite this, Ginsburg said, they set an example that showed “how people can be collegial, respectful and like each other, although they may disagree on important questions.”

At the close of the talk, Harlow asked Ginsburg to finish her sentence: “There will be enough female justices on the Supreme Court when there are…”

Ginsburg laughed, saying, “When there are nine, of course.”