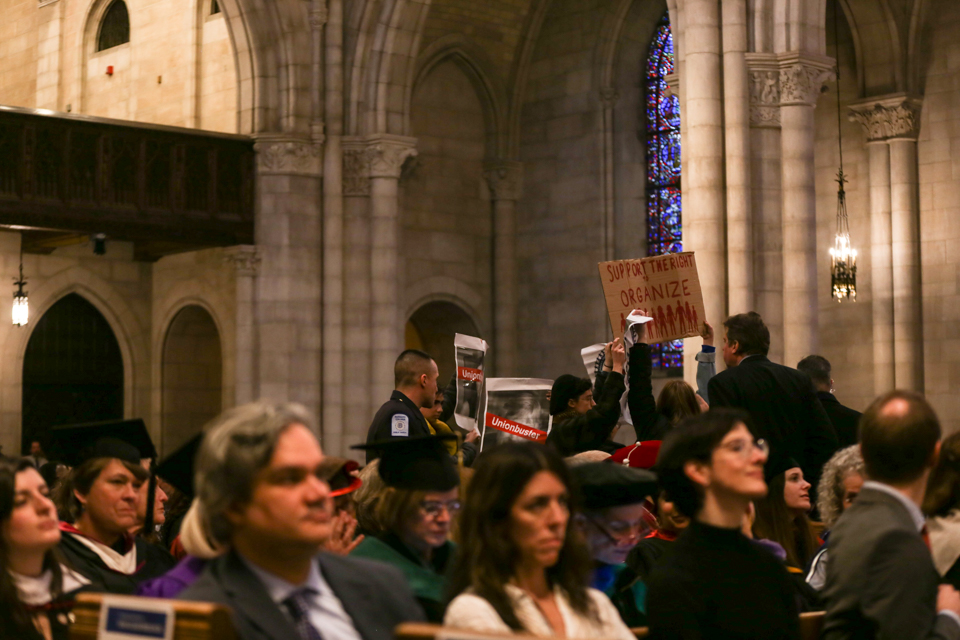 Protesters walk through the aisles of Riverside Church during Barnard President Sian Beilock's inauguration on Feb. 9.

Student-Worker Solidarity has accused Barnard of breaking its own code of conduct following the group’s demonstration at President Sian Beilock’s inauguration ceremony in Riverside Church on Feb. 9.

SWS—in connection with Graduate Workers of Columbia and the Barnard Contingent Faculty Union—staged protests during the ceremony, during which protesters entered the church at two separate points: first to deliver a letter to University of Chicago President Robert Zimmer during his address and later to walk through the aisle during Columbia University President Lee Bollinger’s remarks.

In a statement to Spectator, SWS—a student group promoting labor rights within the Columbia community—wrote that it was protesting against Zimmer and Bollinger for their anti-union stances and against Beilock for her alleged past opposition of graduate workers unions. They accused Beilock of having taken on a leading role in the University of Chicago administration’s “assault on graduate workers’ right to unionize.”

SWS went on to allege that Public Safety officers followed them as they left Riverside Church, refused to let them enter the gate at 118th Street and Claremont without showing their IDs, and later followed them through the main gates at 116th Street and Broadway and into the Diana Center when they tried to attend the post-inauguration reception. They also accused Vice President of Campus Services Gail Beltrone of photographing them without their consent.

Barnard’s code of conduct guarantees students’ right to “freedom of expression” and notes that students “are expected to exercise regard for the rights and sensitivities of others.” Citing this rule, SWS demonstrators claimed that Barnard’s treatment of the protesters following the demonstration represented a violation of the code.

“As students, workers and community members, we are disappointed that the administration would preach these values while simultaneously intimidating student activists on their own campus,” SWS wrote in their statement.

SWS also claimed that Barnard violated its disciplinary procedures when Public Safety officers refused to allow the protesters into the reception in Diana. The code of conduct states that the college can impose sanctions on a student only after a disciplinary hearing has taken place and the student has been found guilty of committing a violation.

“The Barnard administration retaliated against a silent, peaceful pro-union protest in a manner that forewent the procedural requirements of their disciplinary process,” the group wrote.

However, in a statement to Spectator, a Barnard spokesperson emphasized the college’s support of freedom of speech and denied that the college had broken its policies.

The statement said that the college supported the right of students to express their views in ways that do not disrupt college events and maintained that the college acted according to its policies regarding student protests.

The college’s spokesperson added that although members of SWS had not raised their concerns directly with the college, the college would be receptive to engaging with the group when and if the latter chooses to do so.

SWS declined to reveal whether or not it had issued a formal complaint or was planning to do so in the future. However, members wrote that they considered the college’s actions following the demonstration to be an act of retaliation for their protests during the event.

“The depth of the administration’s opposition to the labor movement is clearly demonstrated in their excessive response to our completely silent and peaceful protest and their willingness to violate their own code of conduct in order to stifle our pro-union voices,” the group wrote.