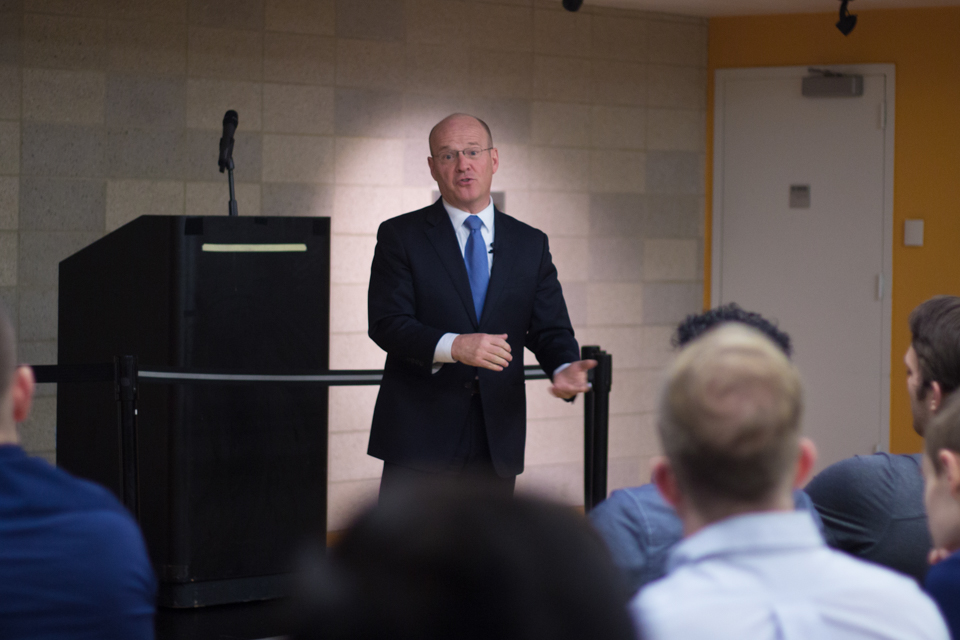 Mark Mix speaks about worker's choice in the Lerner Party Space at an event hosted by CUCR on Tuesday evening.

On Monday, the Supreme Court heard arguments for Janus v. AFSCME to decide whether public employees who do not want to be union members should be legally required to pay union fees. Mix’s NRTW, representing social worker Mark Janus in his suit against a union, contended that compulsory union fees violate rights to freedom of speech, an argument that opponents see as a gateway to eventual union failure.

In anticipation of Mix’s speech, Student-Worker Solidarity, the Barnard Contingent Faculty-United Auto Workers Local 2110, and members of the Graduate Workers of Columbia-United Auto Workers held a press conference on Low Steps on Tuesday afternoon decrying the event, as well as Columbia’s ongoing refusal to bargain with graduate students. Approximately 30 protesters from the aforementioned groups later gathered outside of Lerner Hall to protest Mix’s speech.

Pro-union protesters denounced both Mix and Columbia on Tuesday night. In December 2016, graduate students voted in favor of joining the GWC-UAW. Since then, the University has refused to recognize this vote despite approval by the National Labor Relations Board. And last month, the graduate student union and local allies demonstrated on Low Steps and at Barnard President Sian Beilock’s inauguration ceremony in Riverside Church.

The goal of the National Right to Work Foundation, headed by Mix, is to eliminate “coercive union power” by opposing laws that mandate workers to pay union fees, especially in cases where workers may disagree with union beliefs.

In his speech, Mix predicted the Supreme Court will rule 5-4 in favor of Janus in a decision that will be the “final frontier for organized labor.” Mix also referenced past cases that affirmed workers’ right to choose in union participation, such as Knox v. Service Employees International Union.

“The idea of forcing someone to adhere to a political ideology is something that none of us would agree to. No one should be forced to support purely political speech as a condition of their employment,” Mix said. “Giving up your First Amendment rights, your constitutional rights, is nothing you should have to sacrifice for your job or your career.”

During his speech, Mix responded to union supporters’ fear that the Supreme Court’s decision would cut funding from unions and take away their political power.

However, many protesters condemned the “right-to-work” laws and pointed to Mix’s involvement in union-busting conservative movements. Demonstrators initially planned to hold the protest on the campus side of Lerner, but Public Safety and officers from the New York Police Department directed them to a fenced-off area outside of the Columbia Bookstore on Broadway and 115th Street.

“Right to Work is a sham. It’s a completely falsely named program that actually aims to take workers out of the equation of workplaces and squash their voices,” Henry Cames, SSW ’14 and a delegate of 1199: The National Healthcare Workers’ Union, said. “So that’s why it’s super important that workers and students ... come out and counter right-wing demagogues like this guy speaking here tonight.”