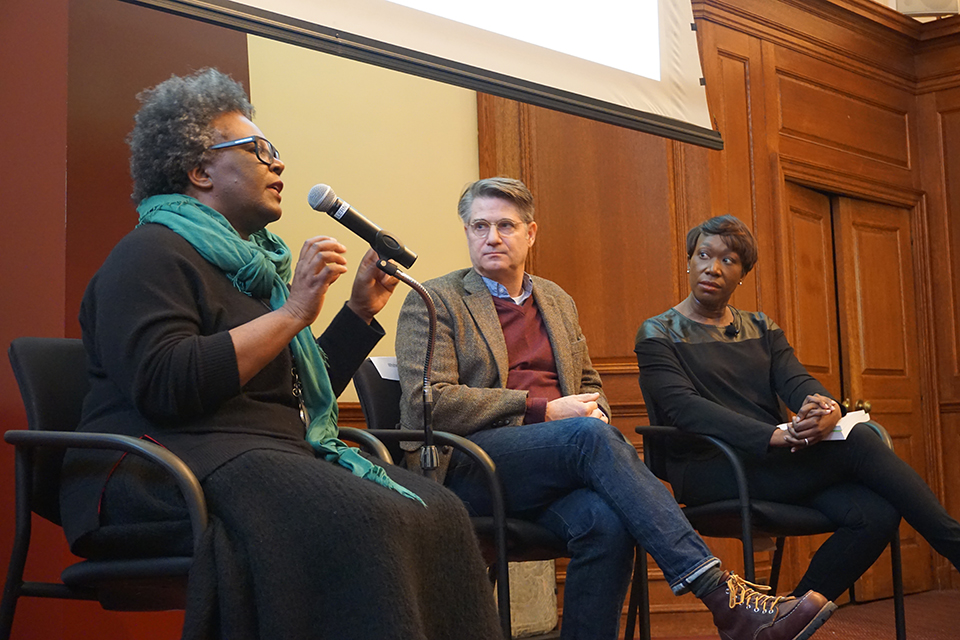 Claudia Rankine, Arts '93, and Whitney Dow, GS '86, debated how white people fit into the narrative of race in America at a University Life event moderated by MSNBC correspondent Joy Reid on Wednesday.

Writer and MacArthur Fellow Claudia Rankine, Arts ’93, and Oral History Master of Arts professor Whitney Dow, GS ’86, discussed the role that white Americans play in conversations on race and identity at an event hosted by the Office of University Life on Wednesday.

Office of University Life Executive Vice President Suzanne Goldberg introduced the event, which was cosponsored by the Heyman Center for the Humanities, as part of a series to bring together the Columbia community in conversation over pressing issues from immigration to free speech.

The discussion was moderated by MSNBC political analyst Joy Reid, who pushed both Rankine and Dow to answer difficult questions, leading them to disagree on how white people fit into the narrative of race in America.

“So black people talk about race all the time,” Reid said. “This is something that we just grow up doing; you have to navigate race in your daily life. Why should white people want to join in?”

She described how many white people tend not to understand their positions as active participants in structural racism because they are not forced to think about their race in the same way as non-white people.

“It’s almost like a conspiracy—that white people don’t have a race,” Rankine said. “The subjugation of people of color remains a distant dynamic if you don’t realize that you actually are part of the dynamic.”

Reid then directed the question to Dow, who is white. He answered that engaging in discussions about race improved his understanding of the world.

However, Dow acknowledged that many Americans feel uncomfortable talking about race.

“There’s a huge fear for white people to examine the narrative of what it means to be white in America,” he said.

It was with this fear in mind that Dow started the Whiteness Project in 2014, an interactive documentary series that investigates how white Americans talk about race.

Dow described the project as his attempt to relieve the burden of explanation about race off of people of color. Dow said that the series aims to fill what he sees as a gap in the discourse about race—white people talking to other white people about whiteness.

While Dow’s project deals with racism on the individual level, Rankine said she believes improvement must take place on an institutional level if anything is to change.

“Because it’s an institutional problem, individual white people do not matter as individuals,” she said. “What matters is what’s happening institutionally.”

Dow contended that white people will not be able to talk about structural racism until they have a language with which to grapple with race.

“Institutions are made up of people,” he said. “Until you change white people you can’t change institutions.”

Rankine pushed back on the idea that white people are currently unable to address racism.

“White people have the ability to think about this,” she said, to a round of applause.