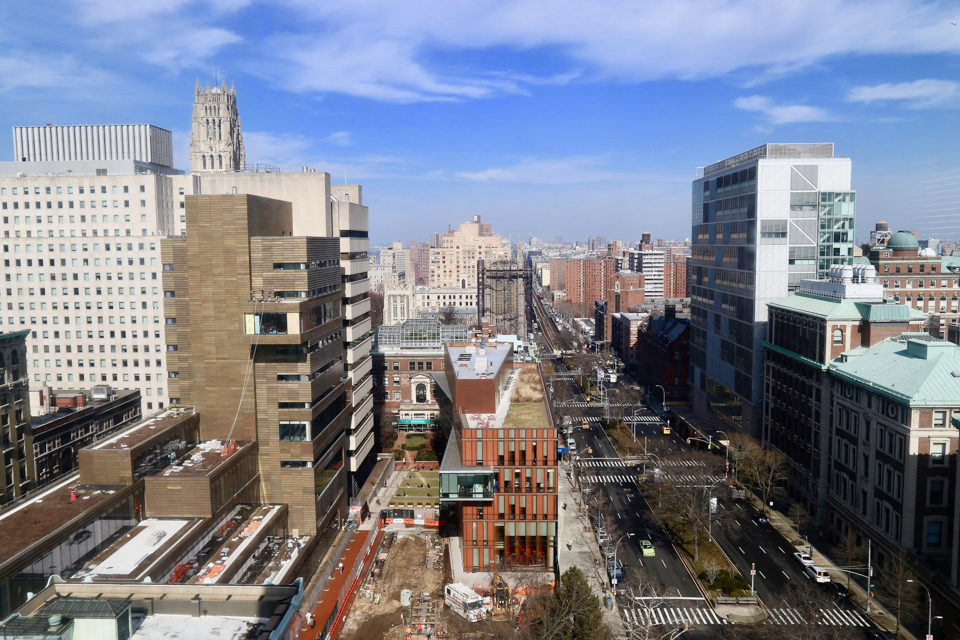 Students have argued that due to Barnard’s credit policy, they are still more likely to take unpaid internship opportunities, while funding resources from the college are limited.

Though Barnard emphasizes the professional and academic value of internships, the college’s policies regarding internship credit and the limited number of grants available fail to alleviate the burdens imposed by unpaid internships, particularly for low-income students.

In her inauguration address to the college last month, Barnard President Sian Beilock announced the creation of Beyond Barnard, a new initiative that consolidates career development, student employment, educational opportunities, fellowships, research, and internships into one office, encouraging students to use the city as an extension of the classroom––including interning with local organizations.

“The opportunity exists to extend learning further using the city’s resources—in course development, in the cultivation of even more cultural and civic partnerships, and through internships that complement the curriculum—and I hope to push the bounds of the classroom in new and innovative ways,” Beilock said.

Despite this restructuring, students have argued that due to Barnard’s credit policy, they are still more likely to take unpaid internship opportunities, while funding resources from the college are limited.

“I needed to get credit in order to qualify for getting a [fashion editorial internship at Esquire], because it’s unpaid, so they have to give you [credit],” Yijun Wang, BC ’20, said. “And so [Barnard offers] this cocurricular credit thing, which is complete nonsense. ... It’s just to appease the organization that’s hiring you. … I guess now at least we can do unpaid internships.”

Alexandra Peebles, BC ’18 and a former copy editor for Spectator, unofficially withdrew from a class when balancing her academic course load and a 16-hour-a-week unpaid internship proved too much. She argued that the college should make the process of obtaining academic credit for unpaid internships more accessible.

“If Barnard offered academic credit, I would absolutely apply for it,” she said. “Having an internship and being able to have one fewer class a semester would have made a huge difference, a world of a difference. I definitely would have done that if it were a thing.”

In 2014 the Berick Center for Student Advising ended its policy allowing students at Columbia College, the School of Engineering and Applied Science, and the School of General Studies to receive registration credit for internships, which like Barnard’s current cocurricular credit did not count toward the credits needed for graduation. At present, the center does not provide credit for internships and emphasizes that all students who intern should be paid by their employer in accordance with federal and state labor laws.

But at Barnard, cocurricular credit allows students to take unpaid opportunities. More than half of semesterly internships and more than 60 percent of summer internships listed on Barnard Handshake, the college’s internship and job portal, are unpaid.

For students with unpaid internships that seek financial support from the college, resources are limited. From the summer of 2017 to the spring of 2018, only 198 students were awarded internship grants through the provost’s office. Of the available grants, just four are dedicated to supporting students with “demonstrated financial need,” and two of the four grants are only available in the summer. According to the college, 37 percent of the class of 2021 are on financial aid, and 14 percent are Pell Grant recipients, the main form of federal aid for low- and moderate-income students. 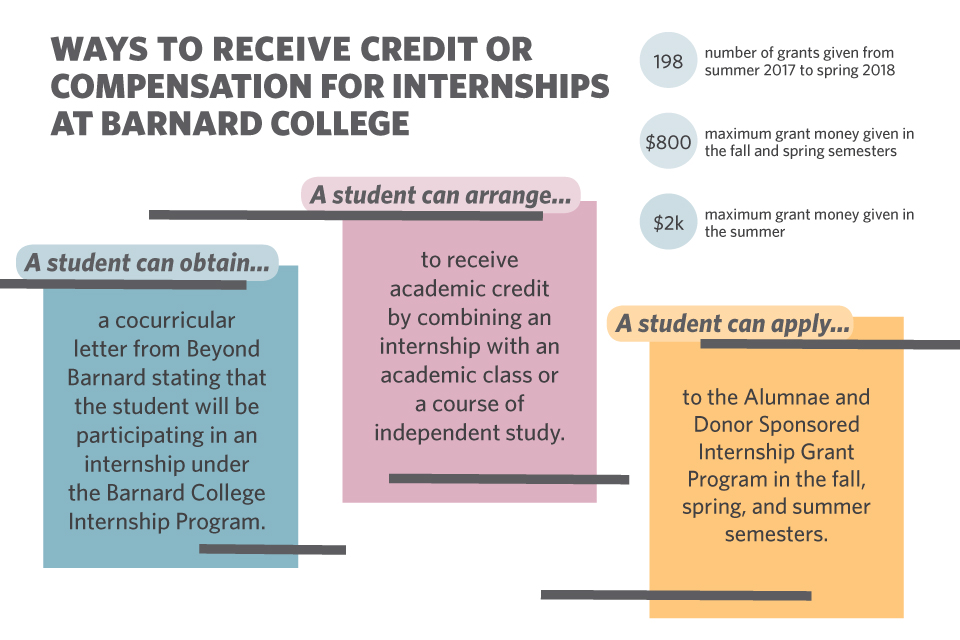 Students also said that there are not enough grants available to provide adequate support and that the current grant system gives privilege to funding for certain fields. The number of grants available for a given field varies widely, with the website listing only one grant dedicated to “human rights” compared to the 10 available for students interning in “arts and culture.”

“It’s important to note that many of these donor-sponsored grants support students who have interest in the arts, nonprofit management, and public interest. So these especially support those students who are looking toward paths that are not as financially affluent like investment banking, finance, or consulting,” Associate Dean for Beyond Barnard Nikki Youngblood Giles said.

Grantees can receive an internship grant award of up to $800 for a fall or spring semester internship and up to $2,000 for a summer internship. Alumnae and donor-sponsored internship grants may not be combined with any other source of funding, and previous grantees are given lower priority, meaning that once a student receives funding, it is often difficult to get funded a second time.

“I did get a grant and I am so grateful for it, but they only offered it for one semester,” said Gabriela Castro, BC ’19, who is a first-generation student and received a grant last semester for her unpaid internship. “You can reapply [for the grant], but it’s a really low probability [that you will get it].”

Youngblood Giles said that Beyond Barnard is evaluating ways to standardize the internship grant amounts.

For some students, obtaining a grant from the office determines whether or not they can afford to take an unpaid internship.

In some cases, even when students receive funds from the office, they were still not enough to cover the cost of summer housing. Last year, the college-subsidized rate for a non-air-conditioned double in 616 West 116th Street, the cheapest available option, costs $1,110 for both sessions of summer housing.

“I can say with certainty that unpaid internships are absolutely not accessible to everyone,” Peebles said. “I’m a relatively low-income student. … You get the grant, you pay for the housing, and there’s nothing left over. It puts you in an impossible place if you don’t have a lot of money, because you’re left with nothing.”

Castro also said that Barnard should make more of an effort to educate students about the grants and credit options that it offers, especially to those students who identify as low-income or first-generation.

“I didn’t know about [the grant options] at all,” she said. “I feel like, as a first-generation student, people sort of assume that you know how everything works … and that’s not the case. For me, it’s just the fact that I’m first-generation, nobody from my family is able to guide me, and the school doesn’t do a good job [of] publicizing that [grants] are an option.”

Youngblood Giles and fellow Beyond Barnard Associate Dean A-J Aronstein encouraged students to meet with their office as they seek internships and other opportunities outside of the classroom. They are also planning a series of programs this summer for students with summer internships to learn how to make the most of their experiences.

“We really hope that any student who is interested in pursuing an internship will talk to us, meet with our advisors, attend our programs, and help us be thought partners with them as they explore options that can advance their academic and professional goals,” Aronstein said.

Despite these new outreach efforts, Eleanor Botoman, BC ’19, criticized Barnard for presenting unpaid and paid internships as equal opportunities for all students and argued that the college fails to acknowledge that unpaid positions are often inaccessible to students who must support themselves financially. “The school should make students aware of unpaid internships and the cost that comes with them,” she said. “It’s good to push students into internships. I think they can be really valuable, but at the same time, not every student has the luxury or can afford to do it. And in many ways, it is a privilege.”