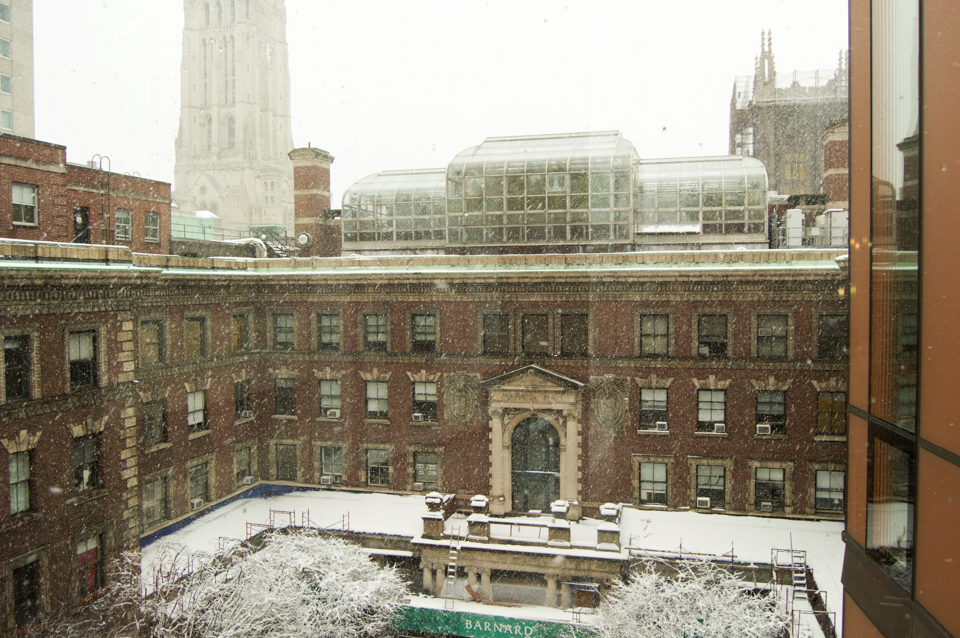 Barnard College has established six criteria to measure the impact that companies it partners with have on climate change.

While Barnard has taken steps towards divestment over the course of the past year, the college has noticeably shifted its environmental focus away from conversations surrounding divestment in favor of long-term sustainability initiatives, many of which may prove more expedient and impactful.

The decision to divest from companies that deny climate science, as well as companies that mine coal and tar sands, came more than a year after calls from student activist group Divest Barnard, now rebranded as Divest Barnard for a Just Transition, for the college to divest from fossil fuels. In response to these calls, the Presidential Task Force to Examine Divestment—headed by Chief Operating Officer Rob Goldberg—was formed to begin analyzing the financial and economic paths toward divestment for the college in February 2016, later publishing its findings and offering a recommendation that December.

Following the decision, the college announced that it would form a working group to divest, create the Sustainable Practices Committee, and appoint associate professor of theater Sandra Goldmark as Barnard’s first-ever director of sustainability and environment.

In order to begin divesting, Barnard switched to a new investment manager, Strategic Investment Group, and partnered with Fossil Free Indexes, a research company that provides investment strategies to mitigate the negative effects of climate change, as well as the Union of Concerned Scientists, a non-profit science advocacy organization that ranks fossil fuel companies through its climate accountability scorecard.

With the help of FFI and UCS, the college’s working group is refining the six criteria and scoring methodology that it plans to use to assess companies and ultimately devise a climate action list. 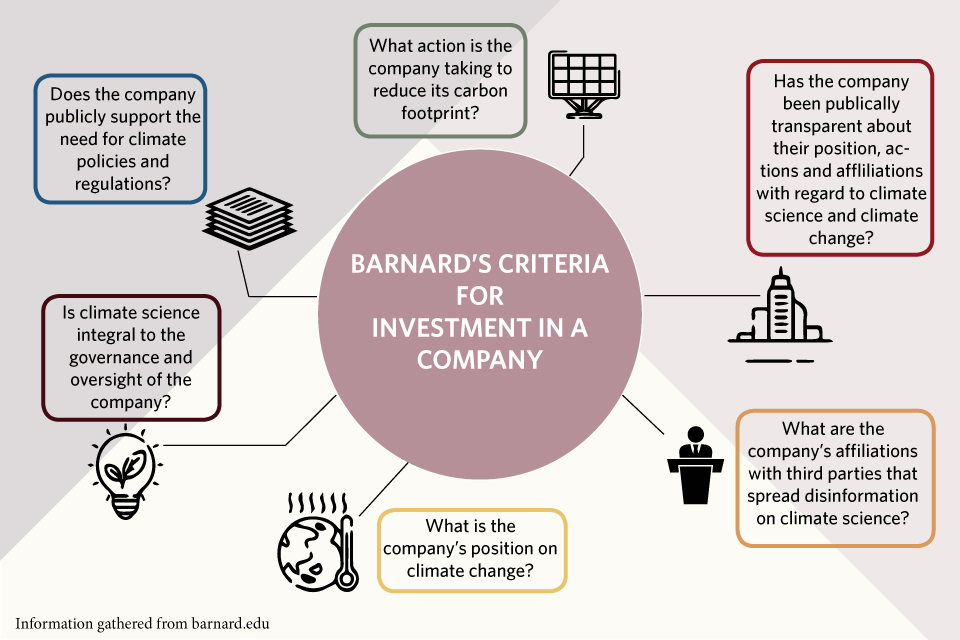 Goldberg noted that Barnard’s approach to divestment from fossil fuels is particularly unique and tailored to the college’s mission. Barnard will provide an update on the status of the climate action list in April, and Goldberg said he hopes it can serve as a model for other institutions.

Senior Representative to the Board of Trustees Jessica Reich, BC ’18, who is also a member of the working group, said that while the committee is eager to divest, it is willing to move slowly in order to ensure divestment is carried out correctly.

“We’d rather delay timing and make sure that we get it 100 percent correct than try to rush out to meet a deadline and not have it be the right way,” Reich said.

But as the college has continued work on divestment, more immediate action has taken place to act on their commitment to campus sustainability efforts, a provision of the trustees’ vote that was previously overshadowed.

Last semester, the Sustainable Practices Committee introduced “a year-long campus conversation to engage [the] entire community in building a shared campus climate action plan,” the cornerstone of which is a series of five participatory workshops on five topics identified by the divestment task force: energy, consumption, and waste, local environment, curricula and research, and campus culture.

The committee is currently developing the climate action plan for the campus based on the ideas generated in the four previous workshops. They will be joined by President Sian Beilock, who “will take part in discussing how to ensure sustainable practices remain a part of the College’s campus culture,” according to an email sent to students this week.

This year, Barnard has worked to standardize signs and bins across campus, improve waste collection on campus, and in January piloted a new organics collection program.

“Waste is really important. It’s visible; it has to do with your daily habits as a member of the community, but it also ties into a much larger system of production, consumption, and waste treatment,” Goldmark said. “It ties into larger goals that the city has. And it’s important because it shows that link between our individual actions and the bigger systems that we live in.”

According to the Sustainable Practices Committee, organics can represent as much as 30 percent of the solid waste on campus.

Barnard Student Government Representative for Sustainable Initiatives Sylvie Rosen, BC ’19, said that student engagement in sustainability initiatives has increased since the divestment decision and noted that the upkeep of sustainability at Barnard falls upon students and the daily choices that they make. However, she acknowledged that changing habits can be difficult and that while faculty members have attended sustainability workshops, student turnout has not been as high.

“There’s only so much the administration can do,” Rosen said. “I know that most people on campus would say that sustainability is an important value, but I think that should translate more into action.”

Goldberg said that in addition to involving students in sustainability efforts, he is committed to ensuring that students are involved in the divestment process as well.

“We understand that students are incredibly important to this whole effort, and students’ views of what we’re doing are important to our effort. As matter of fact, we’re doing a lot of this because of the student involvement over the past several years. The advocacy piece, if you will, is over, and now we’re into implementation,” Goldberg said.

While Divest Barnard for a Just Transition has accomplished its original goal, it does not see its advocacy as complete.

At a Student Government Association meeting last semester, the group discussed its rebranding, outlining its strategy as one that will focus on community outreach and reinvesting Barnard’s endowment in investments that are “ecologically sustainable, equitable, and just for all.”

Current member of Divest Barnard for a Just Transition and a member of the working group responsible for divestment implementation Maggie Israel, BC ’19, said that following last year’s victory, the group has shifted its focus to ensuring that Barnard changes its financial holdings from those that support an “extractive economy” to those that support a “regenerative economy.”

“[We] have been active participants in the process of defining climate denialism, developing criteria for judging companies, and determining how Barnard will successfully implement the divestment criteria,” Israel said. “We are very excited for official divestment later this year. This is a huge victory for Barnard and a testament to what student organizing and activism can accomplish.”

This Friday, at the final workshop in the campus conversation series, the committee will present a draft of the climate action vision statement and review, discuss, and edit draft recommendations.

“I think we all feel a real sense of urgency,” Goldmark said. “And maybe it goes without saying, but we think these issues are some of the toughest challenges out there, and we think that we have a responsibility to address them as a community and also to equip our students to address them when they leave.”