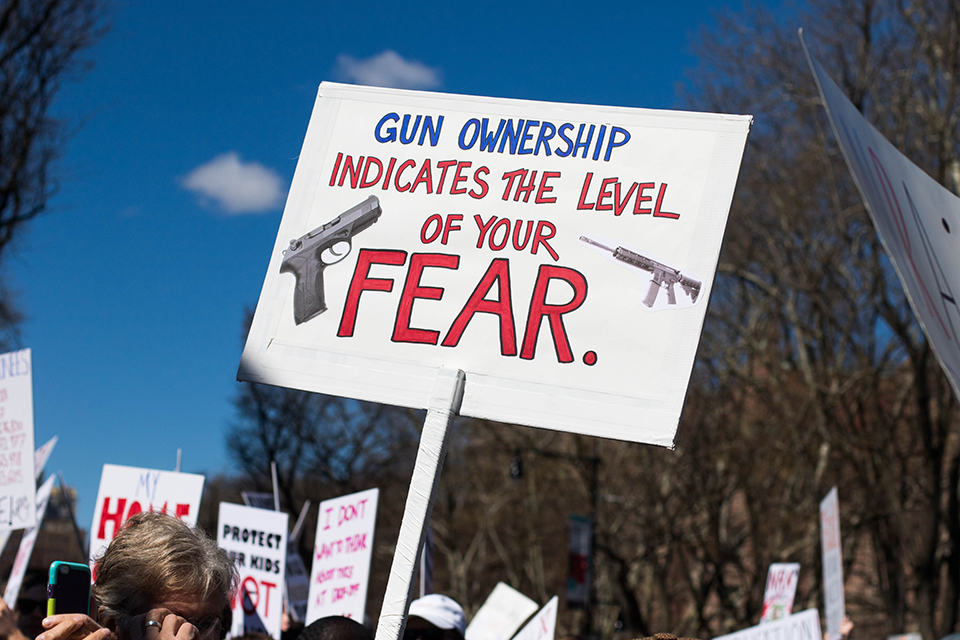 Protestors at Saturday's March for Our Lives came from groups including Moms Demand Action, Guns Down Life Up, Gays Against Guns, Bronx Rises Against Gun Violence, Rock the Vote, and Wear Orange. (Katherine Gerberich/Senior Staff Photographer)

An estimated 150,000 people marched in New York City’s March for Our Lives protest on Saturday, an event organized by several Columbia Law School students in efforts to advocate for stricter gun control.

Four days after the shooting at Parkland High School on Feb. 14 that killed 17 students, survivors of the attack announced that they would march on Washington, D.C. on March 24 to demand stricter gun control laws. In response, Clavering created a Facebook group and began to organize his friends for a New York City march. He soon became New York’s de facto organizer.

Clavering, along with his law school classmates, partnered with New York City high school students as well as several advocacy groups. Clavering also said organizers made sure to include groups representing people of color, who are disproportionately impacted by gun violence.

Groups at the March included Moms Demand Action, Guns Down Life Up, Gays Against Guns, Bronx Rises Against Gun Violence, Rock the Vote, and Wear Orange.

Wear Orange was started by Nza-Ari Khepra, CC ’18, in 2013 after her friend Hadiya Pendleton was shot and killed in their southside Chicago neighborhood when the two were high school sophomores. Khepra spoke at the rally and urged students to wear orange in memory of those lost to gun violence and to register to vote in order to help enact political change.

“[People] equate gun violence with gang violence, but many of the children in Chicago are not in gangs,” said Khepra. “We must and we will go out of our way to protect children’s lives, even if the people in power will not.”

Nikki Shaner-Bradford, BC ’18, and Avalon Hoek Spaans, GSAS ’18, also assembled and led a group of more than 40 Barnard and Columbia students to march alongside members of New Yorkers Against Gun Violence and Attorney General Eric Schneiderman.

Earlier this semester, Shaner-Bradford, who grew up in a Connecticut town close to Sandy Hook Elementary School, where a mass shooting in 2012 claimed the lives of 20 first-grade students and six adult staff members, decided that Columbia needed a student group focused on promoting gun-control and formed the group Columbia University Students Against Gun Violence.

The group, which will remain unofficial until it can apply for recognition next year, has already hosted Executive Director of New Yorkers Against Gun Violence Rebecca Fischer earlier this month and is planning an upcoming event to discuss stigmas surrounding mental illness and gun violence.

The students who marched as members of Shaner-Bradford’s group noted the importance of attending the March to highlight the issue of gun violence in the U.S. and said they would like to see Columbia release a formal statement regarding gun control.

“I feel like because this has become such a student-oriented movement; the lack of statement on behalf of the University isn’t awesome,” said Shaner-Bradford. “Columbia has the potential to be an amazing platform.”

While Barnard sent a college-wide email on March 5 referencing the Parkland shooting and other recent shootings and affirming its ongoing commitment to “preparing for, responding to, and mitigating emergencies affecting our campus community,” including offering active shooter safety training for students, Columbia has sent no such University-wide email.

Students at the March said they found the mass gathering of young people an indicator that policies can change despite current political division, especially as more high school students become eligible to vote.

“I do have hope,” said Letty DiLeo, BC ’18. “I believe that a lot of change happens from the ground up; [politicians] need to hear our voice and understand that they’ll only be voted in if they represent us.”

Speakers, including survivors of the Parkland and Sandy Hook shootings and the parents of victims of these attacks, cited upcoming elections and the political activation of young people as a source of hope in a long drawn-out battle against gun violence.

“This time around it’s the kids pushing [the movement] and the adults are joining in,” said Carolina Dalia Gonzalez, BC ’19 and a former Spectator staffer. “But it’s us leading it, which I think goes to show how much of a force we are in society.”

Despite the clear support for the March, Hoek Spaans pointed to the difficulty of mobilizing a large contingency from Columbia and Barnard.

While the March garnered considerable attendance and support, students expressed sadness that school shootings continue to occur and pointed to the need for continued student advocacy in the future.

“We all wish that it had happened earlier so that we weren’t doing this after the fact,” said DiLeo.