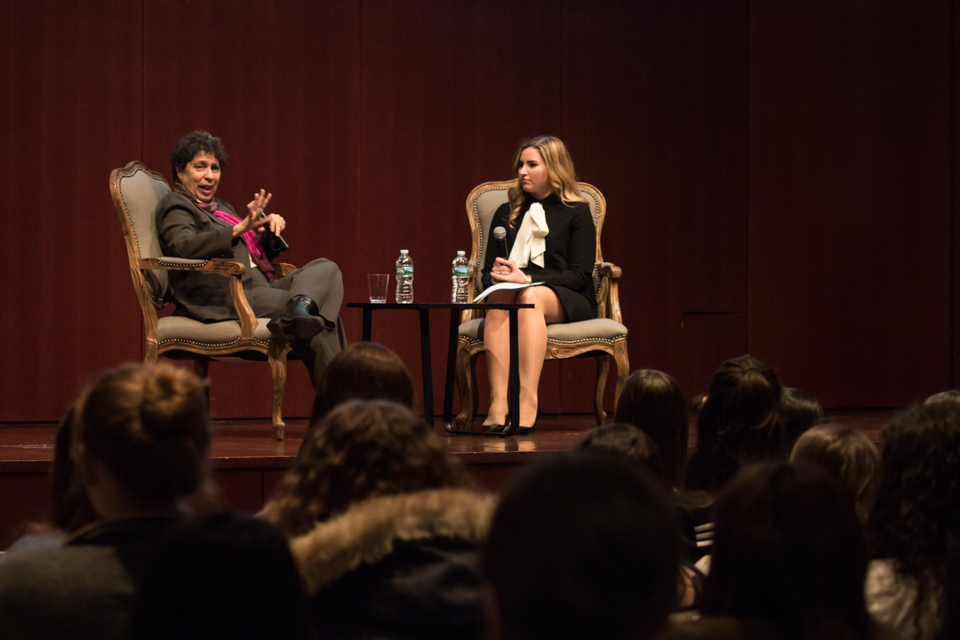 ACLU president Susan Herman (left), BC ’68, speaks at Barnard on Monday evening at an event moderated by secretary of the Athena Pre-Law Society Madison Ailts (right), BC '19.

President of the American Civil Liberties Union Susan Herman, BC ’68, spoke about gun control, the right to dissent, and free speech at a talk hosted on Tuesday by the Athena Pre-Law Society.

The ACLU, founded in 1920, is a nonpartisan, nonprofit organization dedicated to defending the rights and liberties that all individuals are guaranteed by U.S. law. Having served on the ACLU’s National Board since 1988, Herman became the president of the ACLU in 2008.

Herman began by addressing gun control and the Second Amendment, referencing the Parkland shooting that claimed the lives of 17 students and teachers last month. She said that although the ACLU supports the right to bear arms, this right is not unlimited.

“What is not reasonable is that states should go into everyone’s home and take away their guns,” Herman said. “What is not a problem is an assault rifle ban. … The idea that the Second Amendment is opposed to all gun control regulations is just wrong.”

However, Herman added that the ACLU has consistently been opposed to a terrorist watch list as a means of revoking an individual’s right to bear arms, arguing these lists violate the right to due process. Herman also said that the ACLU finds limiting gun ownership on the grounds of mental illness to similarly unconstitutional.

“[The belief that] anytime anyone is called mentally ill that means that they shouldn’t have a gun … is also a little concerning, because that means people are going to be demonized for suffering from depression,” she said.

“The whole idea of the gun control movement, what the kids in Parkland are doing right now, is amazing. … The right to demonstrate has always been tremendously important,” she said.

Herman weighed in on invitation of controversial speakers to campus, which has been a prevalent topic of discourse following Columbia University College Republicans’ decision to invite speakers from the so-called alt-right over the course of this year, with Ann Coulter slated to appear Tuesday.

She emphasized that hateful speech is protected under the First Amendment, as long as it does not directly incite violence or constitute a threat.

Instead of prohibiting certain ideologies or speakers on campus, Herman’s proposed solution is to counter objectionable speech with education.

“One person’s hate speech is another person’s dissent,” she said. “The best antidote to bad speech was more speech. If somebody is coming to campus who you believe will say something obnoxious … instead of stopping them from speaking, surround them with more education and more speech.”