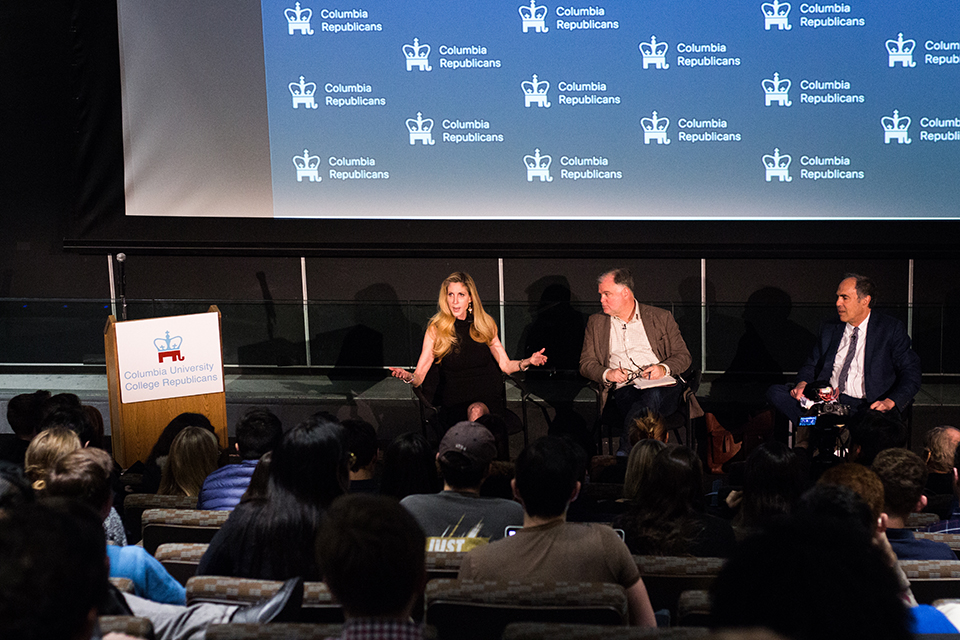 Conservative political pundit Ann Coulter and blogger Mickey Kaus examined what Trump’s America looks like, specifically discussing issues of immigration and income inequality at a Columbia University College Republicans event this Tuesday that drew protests from students and outside groups.

Coulter is known for her anti-liberal rhetoric and extremely conservative views. She has penned books such as “¡Adios, America!” and “Godless: The Church of Liberalism.” Coulter previously spoke at Columbia in 2009, criticizing Columbia’s liberal and sex-positive student body and calling former student Emma Sulkowicz, CC ’15, a "fake rape victim.”

Kaus, a Democrat, was brought to the debate at Coulter’s request to offer a balancing viewpoint, though their opinions overlapped on the issue of immigration, which they both criticized heavily.

CUCR changed the format of their Q&A section for this event, which 125 students attended. Typically audience members are allowed to verbally ask the speakers questions, but CUCR instead took written questions from the audience, some of which were then chosen by the moderator, Rob Long, best known as an executive producer of the 1980s show “Cheers.”

About 10 protesters attended the event itself and voiced their concerns with this procedural change, claiming that it was another way to silence their voices.

A tense moment came during the Q&A section, when one protester was forcibly removed by Public Safety after he continually spoke out of turn. Coulter threatened to leave the event early if the protester wasn’t escorted out of the venue. Furthermore, Coulter responded to chants calling her a “racist” with insults, calling her critics “idiots” and “morons.”

The event also garnered a small group of protesters outside Lerner Hall. Six protesters from RefuseFascism.org, an outside activist organization devoted to opposing the Trump administration, held signs that read “Ann Coulter = Fascism” and “Protest Ann Coulter.” The group objected to Coulter’s presence on Columbia’s campus as well as her conservative views.

“It’s not free speech, it’s hate speech,” said Pablo Orozco-Castro, a student in the School of Social Work. “Ann Coulter is an example of what is wrong with our country.”

Protesters argued that the University had deliberately limited their capacity to challenge the speakers, pointing to the restriction that signs must be 8.5 by 11 inches or smaller within the event.

During the debate, Coulter and Kaus, who both voted for Trump, discussed Trump’s hard line on immigration and promise to build a wall as the specific parts of his platform that they liked. Coulter is famous for her book, “In Trump We Trust,” in which she urged Americans to vote for him.

The two have since turned against him, saying he hasn’t delivered on his promises and has sided with the establishment candidates he once condemned. However, neither of the two speakers said they regret placing their trust in Trump.

“I regret nothing. … I’ve been waiting 30 years for people to say all these things. ... I knew he was a shallow lazy ignoramus, and I didn’t care,” Coulter said. “He’s saying what I wanted somebody to say. What I’m disappointed in is he’s doing everything ‘Jeb-exclamation-point’ and Marco Rubio said they were going to do,” said Coulter.

Kaus’ focus during the discussion was almost entirely on immigration, basing his support for Trump on the President’s intention to return job opportunities to working-class Americans. Kaus believes an increase in immigrants and refugees, legal or otherwise, would decrease the amount of jobs available for working-class Americans, a trend he believes Trump is capable of reversing.

Similarly, Coulter advocated for an immediate moratorium on immigration and believes all “current immigrants” should be fully assimilated. She warned against the dangers of immigrants voting along the lines of ethnicities rather than actual policies.

Both Coulter and Kaus asserted that all immigration is bad for Americans and the economy, irrespective of whether the immigrants are admitted under H-1B visas, as unskilled laborers, or for professional or educational purposes.

“Absolutely everything can be made better by an immigration moratorium and a wall,” Coulter said. “Now we’re getting immigrants who are fantastic at scamming government programs and in some cultures it’s not even embarrassing, you’re kinda a sucker if you don’t.”

Further, Coulter critiqued the protest culture that has been prominent recently on college campuses, calling it unnecessary and incapable of real change. She cited in particular 1968 student protests and their failure to end the Vietnam War.

“Historically, we haven’t had many protests on the streets, that’s more of a Third World thing,” Coulter said. “We have a constitutional system, there really isn’t a reason to be running around breaking things.”

However, Kaus disagreed, saying that the student protests pushed Nixon to his policy of Vietnamization and ending the draft.

CUCR’s next event with be a panel on national security with former Deputy United States Military Representative to the North Atlantic Treaty Organization Blaine Holt and Army Sergeant Dan Prince on April 4.