Columbia’s funding for Core classes abroad is going to run out, and faculty don’t know what comes next

Columbia’s funding for Core classes abroad is going to run out, and faculty don’t know what comes next 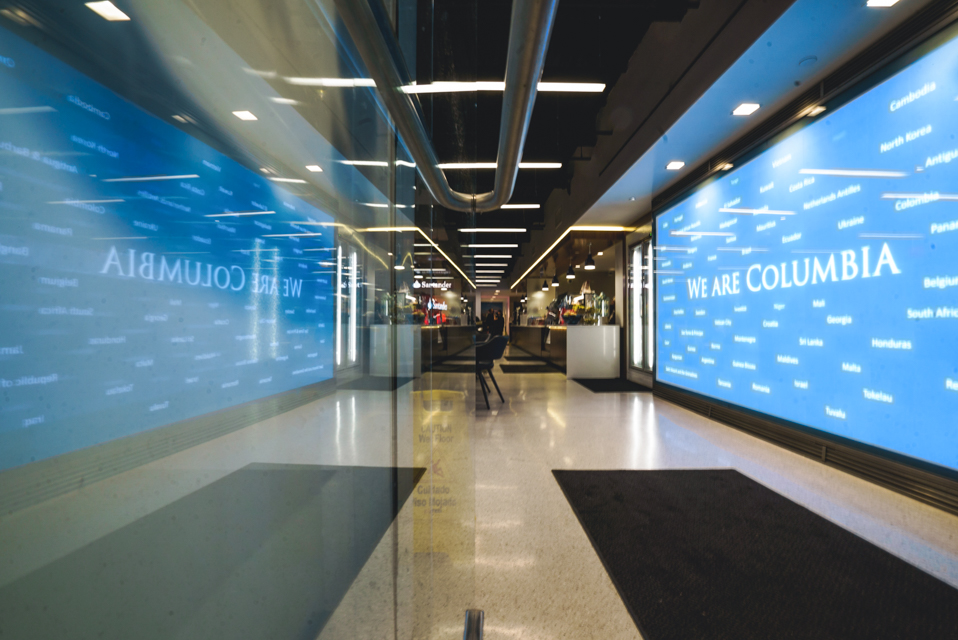 Though the Office of Global Programs offers more than 200 study-abroad programs for undergraduates, faculty have expressed feeling excluded from initiatives centered on global education.

While University President Lee Bollinger has made Columbia’s global presence one of his main priorities, expiring funding for the Core Curriculum abroad and a lack of communication from key administrative offices have stifled faculty’s involvement in global education.

Bollinger has prioritized global presence by introducing Columbia World Projects and the World Leaders Forum since he took office in 2002. The Office of Global Programs now boasts more than 200 offerings of study-abroad programs for undergraduates.

But global education in the Arts & Sciences has seen its share of problems. A grant offered by the Andrew W. Mellon Foundation, which aims to advance the arts and humanities through supporting educational institutions, is set to expire next summer and will not be renewed by the University, according to Executive Vice President for Arts & Sciences David Madigan, who is stepping down from the position this August.

This could lead to the discontinuation of certain Core Curriculum offerings abroad for undergraduates—such as the popular Art Humanities and Music Humanities in Paris program—as early as spring 2019.

More than seven faculty interviewed by Spectator this semester were not aware of this future loss of funding, revealing a lack of communication with administrators. Similar concerns about communication were detailed in April 2016 in a report by a Task Force of the Educational Policy and Planning Committee, which coordinates educational policy across A&S.

Since then, a new committee on global education has been created but has shared few details publicly. The chair of the committee, professor of Latin American and Iberian cultures Patricia Grieve, declined to be interviewed for this article.

Kavita Sharma, the acting dean of OGP, also declined to be interviewed. Sharma became dean for the office in August 2016, but her attention is divided between OGP and the Center for Career Education, another major University department that she heads.

With the imminent expiration of the Mellon grant, it isn’t clear whether study abroad programs that were intended to be long-term installations will be able to continue.

“The Executive Committee [which establishes educational policy for A&S] has been re-authorizing the Paris courses one year at a time, and I hope this will continue—but this is for future ECs to decide,” Madigan, who is on the committee with Columbia College Dean James Valentini and Graduate School of Arts and Sciences Dean Carlos Alonso, said.

Columbia has received two grants from the Mellon Foundation: one in December 2012 for $2.1 million, and another in December 2015 for $2.5 million, both with the intention of supporting the Core abroad. 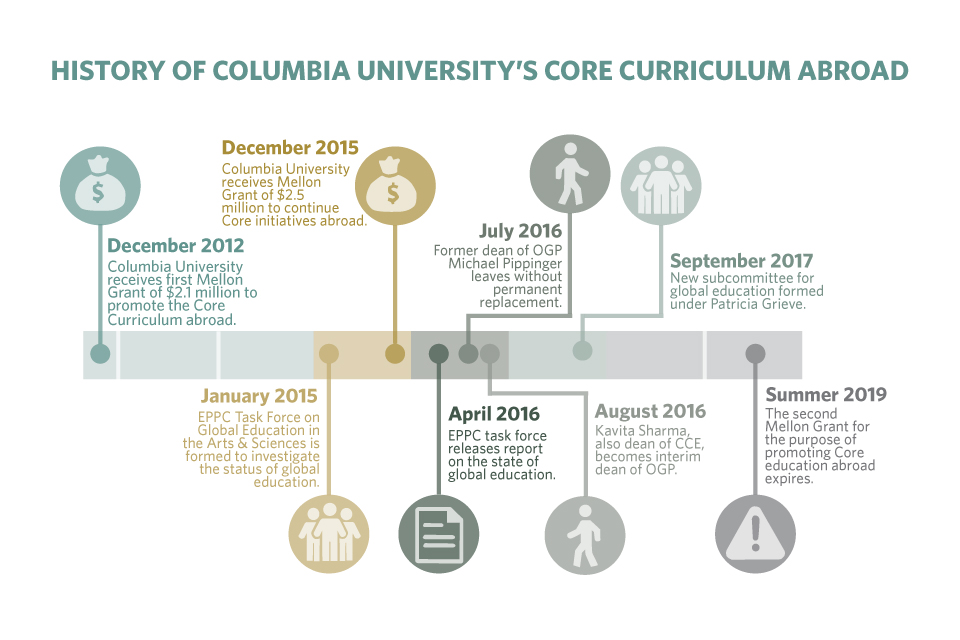 Susan Boynton, chair of the music department, helped initiate the joint Art and Music Humanities summer program in Paris but said she has not received any word from administrators clarifying the future of the regular school year program.

“I think what’s disturbing to those of us who went through the trouble of creating these programs is there’s a sense that there’s not really an ongoing commitment to making this educational opportunity available to students,” Boynton said. “Offering the Core abroad, we feel, is added value.”

Professor of art history and archaeology Holger Klein, who is set to teach abroad in the same course in Berlin this summer, affirmed that the loss of funding from the Mellon Foundation could have major consequences.

“The discontinuation of these [Art and Music Humanities academic year] programs is a real possibility, unless the College and Arts and Sciences administration makes it a priority,” Klein said. “And this is true not only for Art and Music Humanities in Paris but also for other programs that were mounted by various departments as part of the Mellon Global Liberal Arts Initiative.”

Additionally, some faculty have expressed confusion over how the funds from the grant are distributed. According to Boynton, there has never been any official office for handling the grant money, leading to ambiguity in regards to how these millions of dollars are utilized.

“There’s no communication about it. The way that the grant has been administered from the outset has always been very mysterious to faculty,” Boynton said. “I think faculty all feel that there was a certain degree to which it was botched, the way it was carried out and implemented.”

Despite uncertainty surrounding the Core’s fate abroad, faculty remain that it has a lot to offer. Professor of art history and archaeology Francesco de Angelis, who will be serving as co-director of the archaeological fieldwork summer program in Italy, said that global experiences might make the Core Curriculum more tangible and accessible.

“I see opportunities for further development,” de Angelis said. “The Global Centers, the Office of Global Programs, or global initiatives more generally, could play a key role in updating the core and to make it serve the needs of a new generation of students who need to think globally.”

While Grieve’s committee on global education was established to address the concerns of the EPPC Task Force Report, many faculty are unaware of the progress and unclear on the purpose of this committee. Grieve would not share any specifics on its work with Spectator, claiming that more progress would be made this spring.

In contrast to students, for whom OGP provides a straightforward website with a clear application process, faculty receive less guidance from OGP. Boynton noted that the faculty need an easier way to get involved in global education.

“It’s all organized. It’s predictable. It’s a series of steps, and it’s available to them,” Boynton said. “We [faculty] have nothing like that.”

Director and Arabic language instructor for Columbia Summer in Amman Taoufik Ben Amor pointed to a permanent head of OGP as a solution to the persistent issues of opacity.

“I think [a] role [of a permanent dean] would be to work with faculty,” Ben Amor said. “On the one hand, solicit ideas, inspire people to do things in these programs, but at the same time be an open ear to faculty and what they would like to do. What new courses could they offer? How could these courses enhance the [global] centers and this mission of getting the students to be out?”

Prior to taking on the role of active dean of OGP, Sharma’s experience at Columbia was limited to the CCE, which does not prioritize academia. Matthew Hart, associate professor of English and comparative literature and member of the former Task Force, said that OGP should have a stronger focus on academia but questioned whether or not Sharma could provide that.

“Because the Center for Career Education is not an academic unit of the University, I would like reassurance that the primarily academic mission of OGP is being protected and enriched under the present leadership,” Hart said. “It is impossible to see how OGP can effectively do this work without the input and oversight of trained professors.”

Though faculty members like de Angelis expressed that they were able to establish firm communication after contacting OGP themselves, most agree that more concerted outreach would prove helpful.

“Some kind of regular newsletter, call for applications, something like that might probably be useful,” de Angelis said.

For many faculty, lack of communication remains a problem for those who hope to contribute to the University’s underlying goal of providing students with a global education.

“The issue of waiting a year to find out how much you’re going to get paid, not having ever any clear explanation of why a certain formula has suddenly been produced out of a hat, that’s what I call a lack of transparency,” Boynton said. “I’m saying that things can be done in a manner which is on the up-and-up and clear and well-explained.”