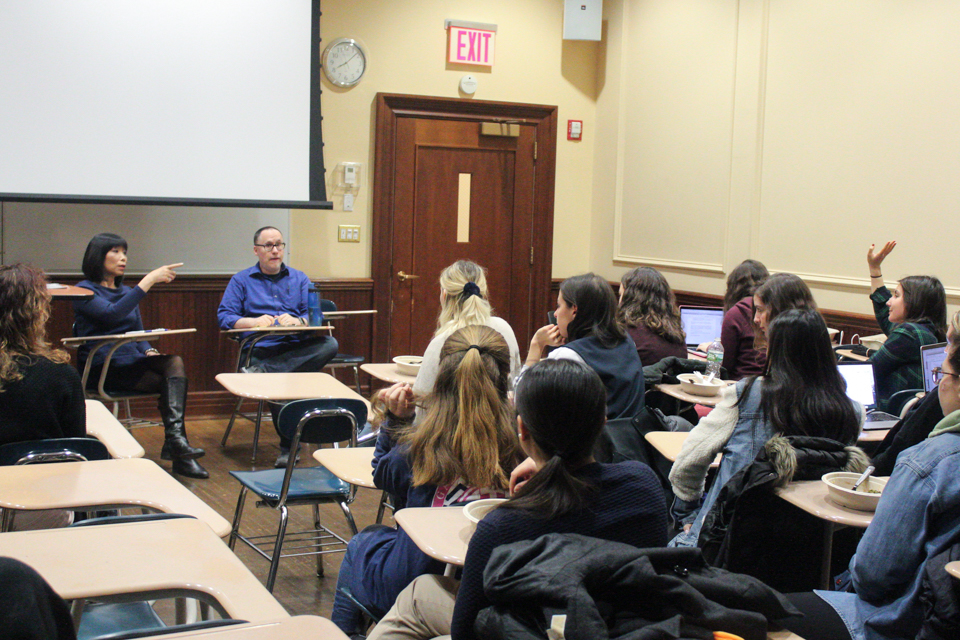 Barnard transfer students voice their concerns and make suggestions on how to ease the transition into a new school at an SGA town hall on Tuesday.

Barnard transfer students discussed the unique challenges they face when acclimating to the Barnard community at a Student Government Association town hall on Tuesday night.

Several students said that the New Student Orientation Program does not adequately address the challenges that transfers face when transitioning into a new community, and added that the lack of transfer-specific programming is particularly notable during fall NSOP.

Approximately 80 transfer students matriculate to Barnard each fall alongside the entering first-year class, which usually numbers around 600. Although these transfers are placed in transfer-only orientation groups and have access to some transfer-specific programming, such as discussion-based activities with other transfers, the majority of NSOP activities are designed for first-year students. The pool of entering spring transfer students is usually much smaller, at around 30 students, and they are grouped with visiting students at spring NSOP.

Becca Glass, BC ’19, who transferred to Barnard last spring, suggested that the administration should more explicitly acknowledge the difficulties posed by transferring to an unfamiliar institution.

“A feasible addition to NSOP would be to include a segment on the fact that acclimating to a new school is really difficult ... A common thread of conversation among transfers is that nobody really prepares you for how difficult it is to re-orient yourself to a new school culture,” she said.

Rose Arditi, BC ’18, said that the challenge of transitioning could also be alleviated by the creation of a written guide for transfer students.

“Something that would be really helpful is a transfer ‘survival guide.’ I feel like it’s so easy to overlook these things and especially [when] adjusting to a new school, it would be helpful to have an actual booklet or something,” she said.

Students also discussed Barnard’s housing policy, which does not guarantee housing for transfer students. The college’s website states that priority for housing depends on a combination of availability, deposit date, and proximity to campus.

Liv Lennon, BC ’19, said that she was worried that she would not receive housing because she is from Connecticut. She did not hear back from Residential Life until mid-August, only a few weeks before the semester began.

Students also said that they had experienced difficulties communicating with the Office of the Registrar and academic departments in order to receive credits for classes that they had taken at their previous schools.

Helena Ong, BC ’20, who transferred to Barnard this January, said that she has struggled to receive approval from the registrar regarding certain credits.

“What it said [in the credit estimate I received in December] didn’t necessarily carry over when I showed up, and when I actually went to go meet with the registrar they said they would get back to me at the end of January. It’s April now and I still haven’t heard back and it’s kind of stressing me out,” she said.

Glass said that her awareness of how difficult it would be to adapt to a new institution only increased after the initial transitional period of NSOP.

“I think that we just didn’t really know at the time how difficult it would be, when you’re just in orientation and everything is so new and you’re just trying to flounder and take everything in,” she said.