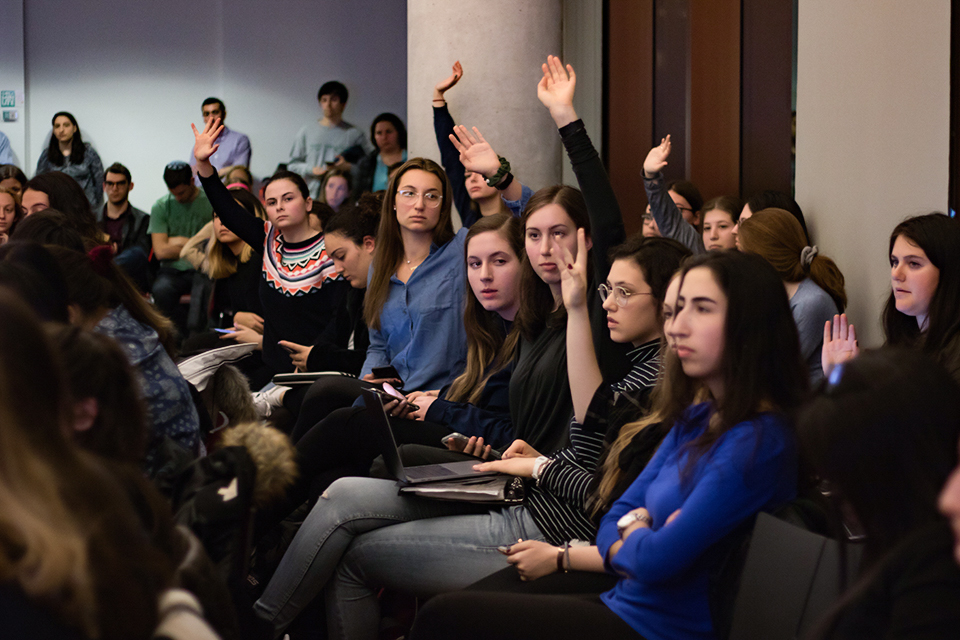 Students ask questions during a discussion about Barnard's investments in Israel at the SGA meeting last Monday.

Barnard’s Student Government Association has asked students to vote on a referendum regarding whether SGA should ask the administration to divest from eight companies that profit from or engage in business with Israel, but pro-Israel students have criticized the voting process for unfairly excluding those who oppose the Boycott, Divest, Sanctions movement.

The referendum was created after representatives from Columbia University Apartheid Divest spoke at SGA’s meeting on March 19 and requested that SGA formally offer its support. Following the public portion of the meeting, members of SGA discussed the issue in private before voting to initiate a student body-wide referendum.

While the purpose of the referendum is to allow students to decide whether they would like SGA to recommend that Barnard divest from these eight companies, members of pro-Israel groups, who did not hear of the meeting until the evening before (when the agenda was announced), did not have the opportunity to present before the referendum was offered. Instead, they presented their concerns at the following week’s meeting after SGA had already voted.

Albert Mishaan, CC ’18, who is president of Aryeh, a Jewish student group that supports a two-state solution, said he felt that SGA’s failure to allow students a chance to oppose CUAD on the same night was unfair.

“They should have contacted the other side ... especially if they see the other side cared enough to come,” Mishaan said. “It’s not equality, we weren’t treated equally because a decision was made [before we had the opportunity to speak]. Having a referendum is marginalizing identities.”

CUAD member Marla Solow, BC ’20, was one of three students who requested SGA’s support at the March 19 meeting. She said that she believes that the Israeli state’s oppression of Palestinians is not a two-sided debate.

“We don’t want to present the issue as though there are two sides that need to come together because there is such an unequal balance of power,” Solow said. “The idea that it can be an equal-sided debate misrepresents the situation and the power dynamics at play. You don’t want to normalize Israel’s violence.”

This anti-normalization approach, supported by CUAD and Students for Justice in Palestine, has left pro-Israel students feeling restricted in their ability to respond, as some non-affiliated student groups have taken firm stances on the issue of divestment. As a result, Rubin said that many members of her community struggle to choose between different parts of their identities.

“People who sit between the overlapping activist and Jewish circles often feel torn between the two and see their allegiance to one as a rejection from the other,” Rubin said. “I don’t think you should have to choose. And I think the anti-normalization policy that gets tacked on to the platform of many social justice groups here forces Jewish students … to do just that.”

According to Rubin, Hillel’s similar policies of avoiding groups that support BDS prevent its members from interacting with many social justice-oriented groups.

Mishaan said that he believes one of the most problematic aspects of BDS presentations is the use of “apartheid” as a buzzword, which he deems misleading and counterproductive to the conversation.

“There are shades of truth, dishonesty by omission, and dishonesty by taking things out of context,” Mishaan said. “To me this shows that you’re not intellectually honest, that you don’t really care about having a conversation about reality or history … but you’re there to propagandize and get your message across.”

According to Arabelle Chafe, SEAS ’18, who is a member of Aryeh, the BDS movement further upsets students because they are told they should not feel offended.

However, Alla Issa, CC ’21, who is a member of SJP and CUAD, said that focusing on the potential marginalization of Zionists during these conversations erases the current marginalization of Palestinians. Issa lived in a Palestinian territory during the Second Intifada, and said she saw her own neighbor get killed by a soldier of the Israeli Defense Forces for leaving his house after curfew.

“That hypothetical situation you’re describing is our reality,” Issa said. “It’s really sad that you’re not considering that your worst fear is our current situation.”

SGA published the referendum online on Tuesday, which includes background information on what divestment is, the particulars of the eight companies in question, and what divestment from them would mean for Barnard.

According to SGA Vice President of Communication Rhea Nagpal, BC ’19, students who request a referendum are held to standards of “respect, integrity, and accountability” in their campaign just as those running for an elected office in SGA are responsible for following their election guidelines to ensure a fair voting process.