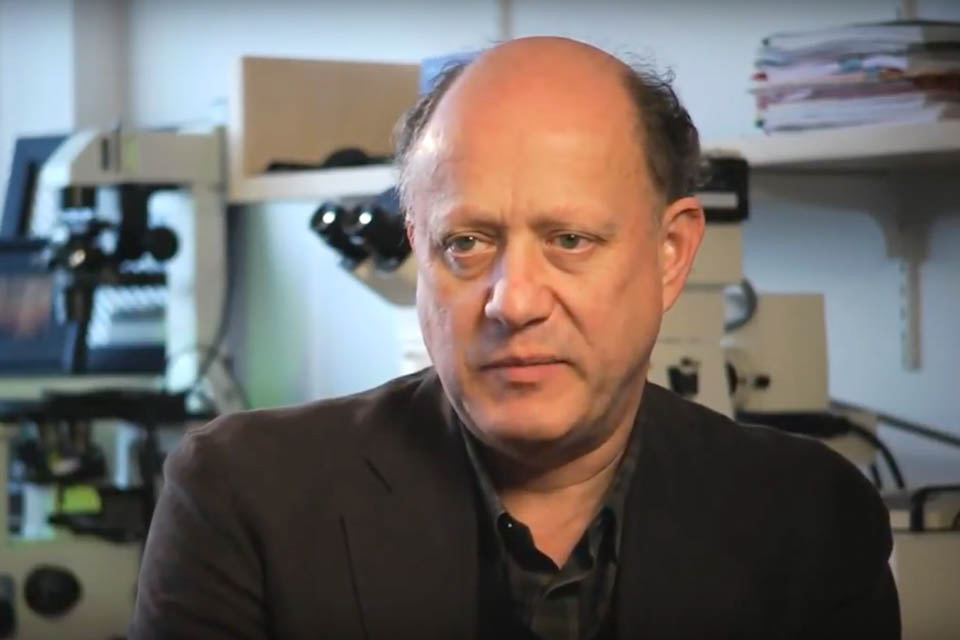 Thomas Jessell played a significant role in founding Columbia’s Mind Brain Behavior Institute, one of the leading neuroscience research centers in the world.

Prominent neuroscientist Thomas Jessell was engaged in a relationship with a lab member under his supervision for years, violating University policies on consensual romantic and sexual relationships, before being removed from all administrative posts this past March, Spectator has found.

Jessell, along with nobel laureates Richard Axel and Eric Kandel, played a significant role in founding Columbia’s Mind Brain Behavior Institute on the Manhattanville campus, which is poised as one of the leading neuroscience research centers in the world. Jessell’s MBBI lab, which employs 25 faculty, postdoc researchers, and graduate students, will be closing down, though members of the lab will receive financial support from the University for the next 15 months.

Columbia started investigating Jessell’s relationship in December 2017, at least five years after the relationship began. The Howard Hughes Medical Institute, an organization for medical research that provides long-term funding for labs and salaries, stripped Jessell of his titles and grants on March 2, and will stop funding the lab on May 31. The University formally announced Jessell’s removal to all faculty members in the neuroscience department on March 7.

Interviews with over two dozen faculty members and graduate students—many of whom spoke to Spectator on the condition of anonymity for fear of retaliation—reveal that in scientific labs at Columbia, there is a culture that discourages individuals from reporting violations of University policies on sexual misconduct and romantic relationships. In the case of Jessell’s violation, interviews with MBBI faculty members indicate that people within the neuroscience department knew of the relationship as early as 2012.

Because the University never clarified the circumstances of Jessell’s dismissal beyond violations of “University policies and values,” there was an immediate concern that an assumption about academic dishonesty could damage the careers of anyone who had worked in the lab. A petition, published on March 10, stated that the University’s approach also missed an opportunity to take a clear stance against sexual harassment in academia to deter potential perpetrators.

According to another MBBI faculty member, a complaint about the relationship was filed to a mandated reporter in 2012, but no disciplinary actions were taken, and the relationship continued for years. However, a University spokesperson said that “the University offices responsible for overseeing Columbia’s policies first learned of possible violations by Dr. Thomas Jessell at the end of November 2017.”

An MBBI faculty member who has worked in close proximity to the Jessell Lab also said they knew of a complaint filed in 2012 and confirmed that the relationship was rumored among members of the Columbia neuroscience community.

While no lawsuit was filed against the University regarding Jessell’s conduct, an MBBI faculty member said that they were aware of discussions about legal action among administrators involved in the dispute in late 2017. The law firm Sanford Heisler Sharp, LLP posted a screenshot on its Facebook page on March 8 that claimed credit for Jessell’s removal, but took it down soon after.

In the post, which also linked to the New York Times’ coverage of Jessell’s dismissal, SHS Chairman David Sanford stated, “I am proud of our client and my firm for helping make Columbia a better place for all students and faculty.” 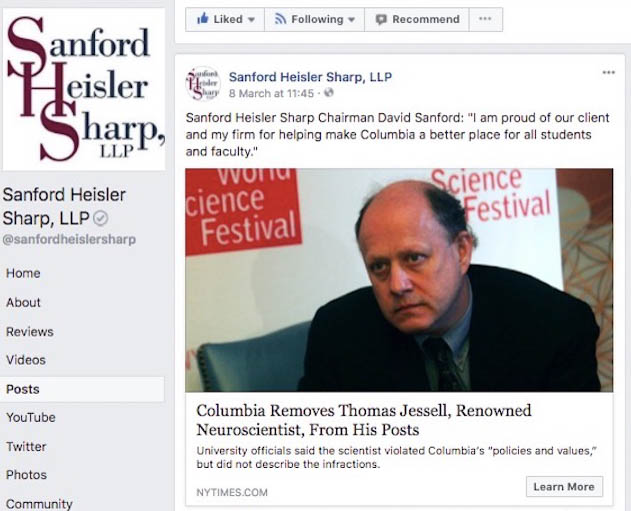 Screenshot Courtesy of Sexual Misconduct at Columbia petition
The screenshot, above, was included in the petition circulated to former university employees on March 10.

When Spectator reached out to Sanford, he said that he could not comment on the situation.

Two MBBI faculty members, a professor at the Columbia University Medical Center, a graduate student in biochemistry, and a former graduate student affiliated with the neuroscience department all said that Jessell has a reputation for exhibiting behaviors that violate University policy on consensual romantic and sexual relationships.

In the wake of his removal, the University came under widespread scrutiny from faculty members, students, and the public for the lack of timely and informative announcements regarding Jessell’s removal and the reasons for his termination.

The MBBI faculty member who has worked in close proximity to Jessell’s lab felt that the University’s statement on Jessell’s general violation of “policies and values” invited misinterpretations that could potentially hurt the reputation of the institute. Instead, they said the University’s statement should have explained Jessell’s misconduct in more detail without revealing the identity of the person involved.

“They did a really poor job of handling the situation when it was unfolding in real time,” the faculty member said. “My first concern was that people would think it was academic misconduct. That effectively smears everyone who has ever come out of [Jessell’s lab].”

Jessell informed his lab of the reasons and details of his removal on March 5. Two days later, MBBI administrators sent an email to the institute’s neuroscience faculty about Jessell’s removal, but they were not given details about the nature of the the policy violated until a faculty-wide meeting on March 9.

However, the University did not formally tell graduate students and postdocs affiliated with the neuroscience department about Jessell’s removal until a town hall meeting on March 14, one week after the New York Times published an article about it on March 7. Faculty and students who are not associated with MBBI never received any information directly from the University on the subject.

“It would have been so easy for them to send out an email and just be explicit [about Jessell’s removal],” a graduate student in the doctoral program of neurobiology and behavior said. “To have everyone to find out through the grapevine—to literally find out what’s going on in your institution through the New York Times—is ridiculous.”

The petition published in response to Jessell’s removal criticizes the lack of clarity around the reasons for Jessell’s removal, and calls for the University to take a firm stance against sexual harassment in academia in order to “stand up and make it known that our community will not tolerate sexual misconduct, regardless of the prestige of perpetrator.” It is signed by 176 medical students, faculty, and alumni of the institution.

“[Jessell’s firing] was obviously very public, but then nothing was coming out. We think that it’s important that Columbia is transparent about why this occurs,” Bianca Field, one of the authors of the petition and a former employee of the psychiatric institute at Columbia, said. “Making this decision to continue a career in academia is a very difficult career path regardless. Adding this extra layer on makes it all the more difficult for people to remain in science and in academia.”

A graduate student in the doctoral program of neurobiology and behavior expressed frustration with existing options to support students who wish to report such instances, and pointed out how many administrators offered the option of switching labs or requesting different mentors.

“[Some of the faculty] still didn’t seem to understand that, for many of us, you can’t just pick up and change labs. My thesis couldn’t exist in another lab … No one will ever be able to fully protect us against retaliation because of the nature of the scientific community being so interwoven,” they said.

Cora Bergantiños, an organizer in the Postdoctoral Workers Union and research associate at the genetics department in the medical center, said that “the fear of the future, the fear for your own labmates” deters students and faculty from reporting sexual misconduct and harassment.

After the Jessell Lab’s closure in response to the University’s investigation, not all of its 25 members have been guaranteed positions to which they can transfer, though University officials stated in an email to neuroscience faculty that they hope to continue to support the researchers’ careers.