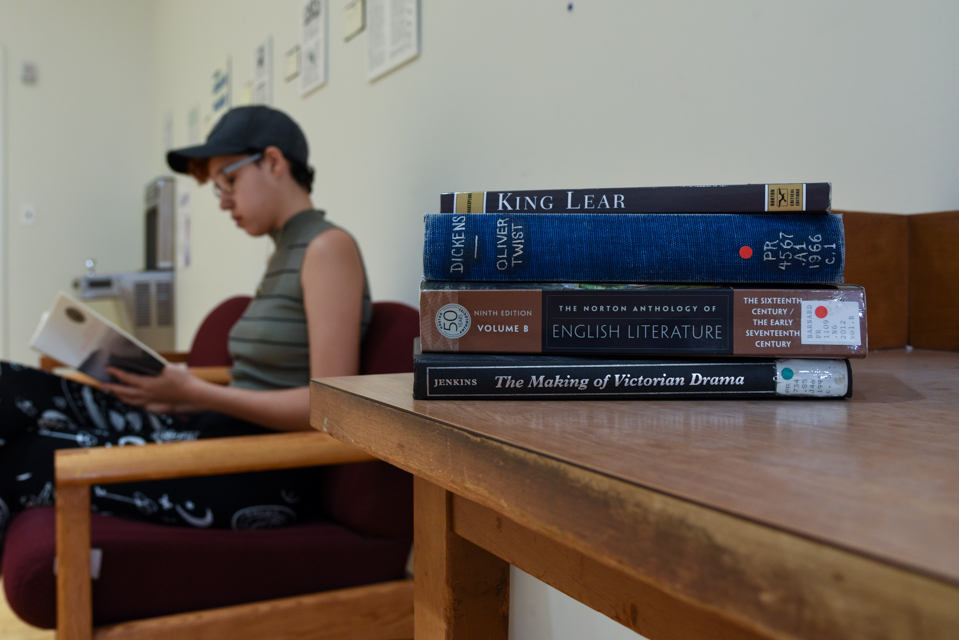 Students in support of Alexice’s petition have argued that in practice the department emphasizes the study of homogeneous, Eurocentric literature.

When Mya Alexice, BC ’20, who identifies as Afro-Latina, decided to become an English major at Barnard, she was alarmed by a lack of diversity in the books she was required to read.

Frustrated by the department’s curriculum, which primarily focuses on the Western canon, Alexice is writing a petition, which has already garnered substantial support from students on Facebook, to change the curriculum.

Though Barnard’s English department professes a mission of fostering writing and verbal skills, as well as and a “heightened understanding of culturally significant texts,” according to its website, students in support of Alexice’s petition have argued that in practice the department emphasizes the study of homogeneous, Eurocentric literature.

Yet while students and some faculty are urging the department to focus on discussing important topics in literature such as race and ethnicity, senior professors emphasize that an English major should focus on primarily classical British and American texts, which are essential to building a framework for understanding other works of literature. For those students interested in more diverse authors and ideas, these faculty point to supplemental courses offered by the department.

However, as a result of the curriculum’s failure to prioritize diversity within its texts, students have reported choosing not to major in English altogether. For students of color who do remain, they point out that the lack of diversity in the classroom makes it difficult for students to have conversations when the subject of race does arise.

To major in English, students are required to take two semester-long colloquium classes during their junior year. Students also need to take two courses on literature published before 1900. While there are different courses offered for both the colloquiums and pre-1900 courses, for the more than 30 courses that fulfill the pre-1900 courses, only one course focuses on black authors and just three courses feature women, according to their listings in the course directory.

“After years of experience, I would say ‘too bad,’ [to students who want the curriculum to change],” Senior Scholar and Emerita Helen Goodhart Altschul Professor of English Anne Lake Prescott said. “In order to understand later literature you need to have read some Shakespeare, Milton, Tennyson. This is good background for an English major. The brutal part of my mind says, ‘If you don’t like it, don’t major in English.’ Many professors would feel that if you don’t give the basics of the British literature supplemented by American literature, you simply can’t understand some of the moderns.”

While few required courses explicitly address gender, and fewer courses address race, Professor and Chair of the English Department Lisa Gordis said she believes that most English majors will take courses that do focus on these topics.

“I guess it’s imaginable to me that one could very carefully construct a list of ten courses that never address race or gender,” Gordis said. “That said, you would have to work very hard to do that. There are very few courses [at Barnard] that touch on neither race nor gender.”

But students have argued that the attention paid to race and gender is often not explicit enough, leading some to pursue majors in department’s more focused on centering marginalized perspectives.

Asha Futterman, BC ’21, wanted to be an English major until she looked at the requirements, which she found discouraging in their lack of diversity. She also grew tired of being the only black student in her English classes. She has since decided to pursue an Africana studies major instead.

“With Africana studies, I will read more of the literature that I want to read,” Futterman said. “I’m not interested in the English major because they’re all white men. If there were more requirements around contemporary world literature, black culture, or African American studies, I would definitely follow the English major.”

For Elisabeth Schweitzer, BC ’21, having elective courses, instead of required courses, that focus on race, gender, or sexuality indicates that the department does not see them as essential to an English education.

Similarly, Elana Rebitzer, BC ’20 argued that promoting this idea of what is considered “real literature” delegitimizes works by authors with marginalized identities.

“There’s a mindset that’s what makes writing serious and not so serious. … The reason they’re not seen as serious is because there aren’t classes where you analyze them from an academic lens,” she said.

Rebitzer added that not requiring students to take classes that diversify the narratives they read is harmful not only to their education, but to their ability to understand other cultures.

Anna Quindlen Writer in Residence and Professor of English Jennifer Boylan said she can relate to the feeling of not having her identity reflected in readings in her past English classes.

“I know what’s it’s like to be an English major and not have any courses about my own experience,” Boylan said. “I know what it’s like to be a member of a culture and to have never seen any transgender people. If you’re not reflected in the culture there’s a way in which you are invisible.”

In the past, calls for added diversity have resulted in the addition of new elective courses, but the the structure of curriculums seldom change.

While a more diverse curriculum would prioritize the stories of marginalized groups, Adjunct English Lecturer Sonam Singh argues that including more authors to the curriculum is a solution that fails to address the larger issues of diversity that the English department is facing.

Not only are these texts at the periphery, but according to adjunct Lecturer Linn Mehta, the professors who can lead the department towards becoming more diverse, and in most cases are people of color, themselves are not fully integrated.

Though the department has been criticized for its lack of diversity, Barnard has pledged to hire 10 new faculty members from underrepresented groups by 2022 throughout the college.

“Generally it doesn’t limit students because we offer twelve different senior seminars a year and the range is quite broad,” Gordis said. “You try to balance the offering as much as we can, and for students whose offerings are not matched, there are faculty members who have frequently taken on independent study.”

Of the seven English professors interviewed by Spectator, all said that they are open to discussing the current structure of the major and considering possible solutions. Gordis said that she welcomes discussion and was disappointed that students did not speak with her before deciding to create a petition.

“We are very interested in students’ views, so [the petition] comes as a surprise to me,” Gordis said. “I would have been very happy to have this discussion with students. … No one has come in to talk to me about these concerns in the past year. I would really welcome that. It might be a productive starting point.”

However, these concerns have also gone largely unaddressed at the classroom level as students of color have turned away from the department because of the restrictive curriculum. Without this presence, class discussions continue to fail to include critical conversations about race and ethnicity.

“The discussions are never quite as frank as they should be. I wish my students were more willing to express how they feel,” Prescott said. “I try to broaden the discussion and some students are happy to discuss sexism, especially, because they’re all female, but I get some silences with race.”