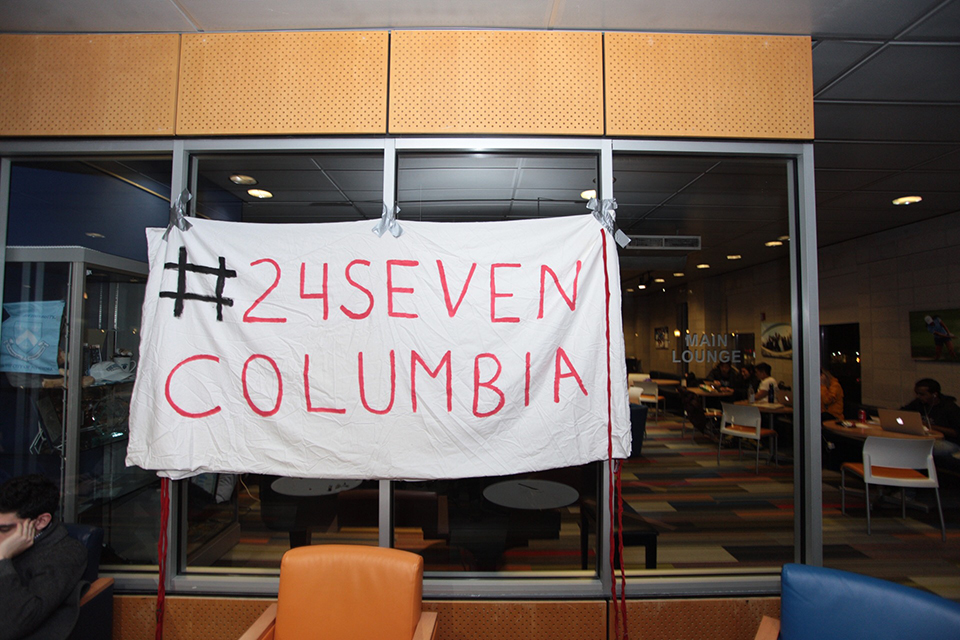 Members say they plan to stay in the building until their demands are met by administration.

About twenty members of student group “24/7 Columbia” began occupying piano lounge in Lerner Hall on Thursday night in a sit-in to protest the lack of round-the-clock accessible healthcare, calling for physical locations that would offer 24-hour access to counseling and trauma support for survivors of sexual assault.

The group, which was formed earlier this year, has a list of demands including the creation of a 24/7 rape crisis center, healthcare center, and access to CPS. Columbia has previously rejected student demands for a 24/7 rape crisis center brought forth by No Red Tape, but does offer a 24-hour phone service for counseling and sexual violence response.

Members have been planning the sit-in since the beginning of the semester, and say they plan to stay in the building until their demands are met by administration. Students came equipped with bags of food, bottled water, and sleeping bags.

The group has already brought these demands to offices including University Life, Health, and Campus services this semester, but has not received the response they hoped for, according to Anja Chivukula, BC ’21.

“This is not the first path we went to. We went through every outlet through the administration and just nothing’s gotten done,” Chivukula said. “The hope is that they’re under a lot of pressure with the grad strike and everything, so hopefully they’ll be willing to cooperate.”

Lerner Hall will close at 3 a.m. Friday morning, before reopening at 7 a.m. A University spokesperson could not immediately be reached for comment.