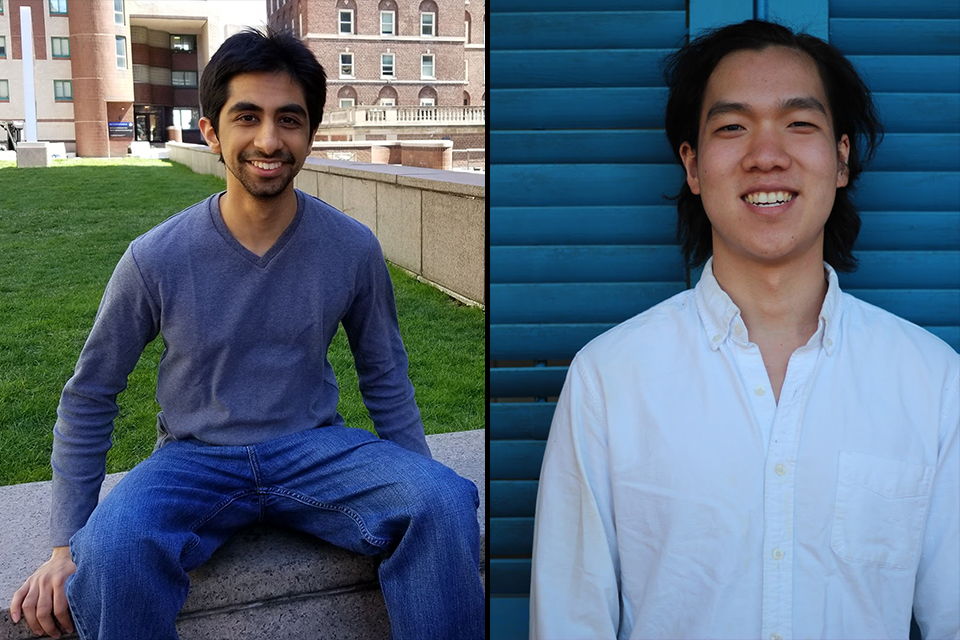 Michael Tong, right, and Rajat Chandra, left, were named valedictorian and salutatorian respectively for the SEAS class of 2018.

In many ways, the day Michael Tong learned he was valedictorian was just like any other. Checking his email in bed, he saw the message from Dean of the School of Engineering and Applied Science Mary Boyce telling him he had won the award.

“I was definitely shocked, but it was a good feeling,” Tong said. “I texted my Mom first. ... She was like, ‘Congrats, but don’t get too pleased with yourself.’”

Tong and salutatorian Rajat Chandra were chosen by faculty in the committee on honors, awards, and prizes for their academic achievements. As valedictorian, Tong will give a speech during the SEAS Class Day celebration in mid-May in front of members of his graduating class.

Tong is majoring in computer science, though he originally entered Columbia as a math major in Columbia College. He also loves the piano and occasionally plays in a competitive Super Smash Bros. gaming club on campus. After graduation, he will work at Jane Street, a trading firm headquartered in New York City, and is applying to math doctoral programs.

“I’ve always been interested in math, [and] I always would have been pushed toward that kind of thing no matter where I was. But at Columbia, it was nice to have people that cared about other things too,” Tong said.

When Chandra first received the email congratulating him on the accomplishment, he didn’t realize its significance.

“I thought it was just some general graduation announcement until I read it and was like ‘Oh, cool.’ I called my parents right away,” Chandra said.

Chandra is majoring in chemical engineering with a minor in applied mathematics. He was involved in chemistry research and has also completed the pre-med track.

Additionally, Chandra served as president of the American Institute of Chemical Engineers and was a member of Tau Beta Pi, the country’s oldest engineering honors society.

“Columbia has given the opportunity to study pretty much anything I’m interested in, at least at some level, and I don’t know if any other school could have given me that,” Chandra said.

Chandra will work as a rotational analyst at the biotechnology company Roivant Sciences after graduating but is also considering applying to medical school.