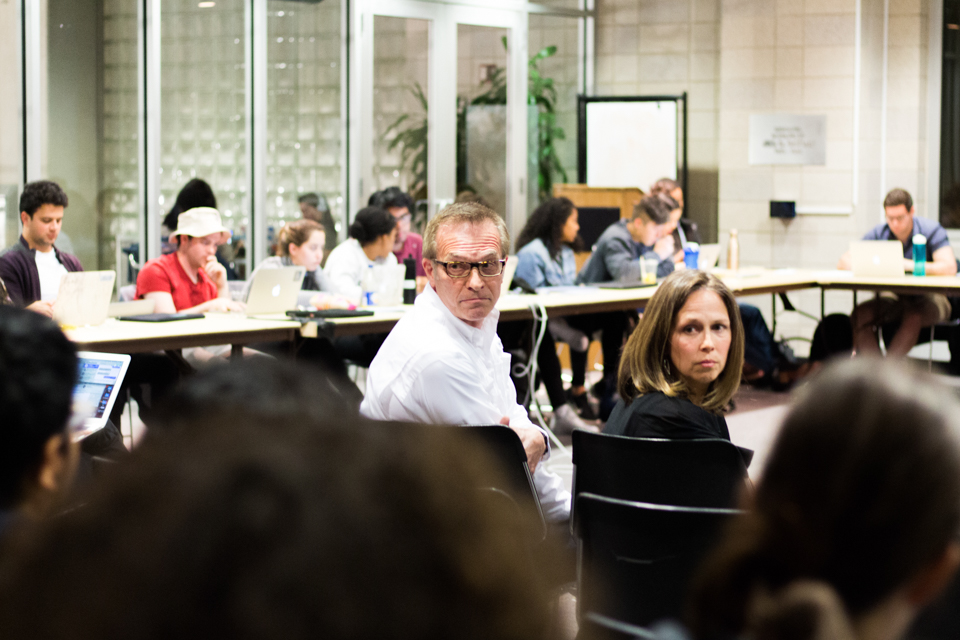 Members asked whether the deans would be willing to endorse the demands of 24/7 Columbia, particularly in light of more than 140 University faculty and staff members signing a letter supporting student demands.

24/7 Columbia has been occupying Lerner Hall since Thursday night, pushing for the creation of a 24/7 rape crisis center, healthcare center, and 24/7 access to CPS. The University has previously rejected student demands for such a rape crisis center.

Members asked whether the deans would be willing to endorse the demands of 24/7 Columbia, particularly in light of more than 140 University faculty and staff members signing a letter supporting student demands.

In response to issues put forth by 24/7 Columbia, Kromm referred students to the University’s 24-hour phone service for counseling and sexual violence response. However, many students view the hotline as inadequate. 24/7 Columbia member Alla Issa, CC ’21, said that she waited two hours on the 24-hour phone line before being able to speak to someone.

Students also raised concerns over the connection between CUEMS and Public Safety, arguing that students—particularly students of color and undocumented students—can feel unsafe having to interact with police in order to access health care.

Kromm also said that students could call 911 directly to avoid interacting with Columbia’s Public Safety. Members of the group pointed out this option would also require dealing with the police.

However, Issa highlighted that, without a 24-hour on-campus service, students with medical emergencies after hours are forced to go to St. Luke’s Hospital, where they can can be forced to pay a copay of up to $125 under Columbia’s health insurance.

Dean Valentini said that this concern is one being addressed in Columbia’s multi-year partnership with the suicide nonprofit the Jed Foundation.

“The purpose of the engagement with the Jed Foundation was to work on broadly considering all things we are now doing and all the ways in which we might improve the services that we provide to students. That’s one of the things that’s considered within the domain of the Jed engagement,” he said.

24/7 members also voiced their concern over the ties between members of the Jed Foundation’s advisory board and the University, saying that these connections constitute a conflict of interest, while student council members questioned the transparency and openness of the entire process.

“Their reputation is at stake each time they consult with or support an institution, they have a great deal to lose if this isn’t done effectively and successfully,” Valentini said. “I wouldn’t describe [JED] as confidential or secret, it’s just that they don’t have open meetings.”

He also insisted that the process would eventually include more students, and claimed that Columbia has been the most open among all universities that the foundation has worked with.

“Since this news came in very late in the semester with only two weeks remaining, some students are now facing potential homelessness over the summer. This obviously increases mental health issues within this group of students and can be a potential risk on their lives. I was wondering if the administration can do something to protect their students from this emergency situation,” Academic Affairs Representative Dafne Murillo, CC ’19, said.

Valentini responded by saying he did not have a concrete response at the moment since the issue had only recently been brought to his attention.

Additionally, the council voted to amend its constitution, adding several duties to the position of Vice President of Finance. The changes, proposed by VP of Finance, Adam Resheff, CC ’19, state that the VP will now be responsible for evaluating the inclusivity of student groups and distributing funds accordingly, with the ability to “reward groups that demonstrate a strong commitment to building community on campus and engaging a wide-breadth of students.”

This would however, not affect the student group allocations made by student governing boards, or decisions made during Funding at Columbia, the process by which councils decide how to distribute funds to governing boards.