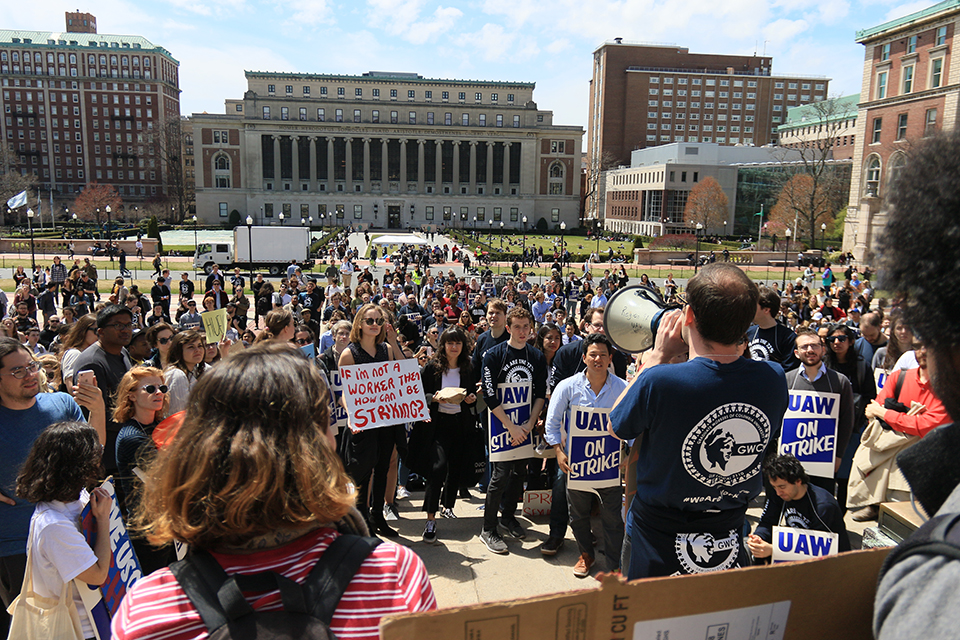 Trevor Hull, a PhD candidate in the chemistry department, speaks through a megaphone to a crowd of graduate students on strike Tuesday morning.

Graduate students began a weeklong strike Tuesday morning, chanting slogans and carrying signs along a picket line across College Walk as they protested the University's refusal to bargain with the graduate student union.

The union’s strike is the latest development in a long legal battle over graduate students’ right to unionize. Earlier this month, teaching and research assistants who support the union authorized a strike with a vote of 1,832 to 136, after which the union announced it would strike from April 24 through April 30 if the University maintained its refusal to bargain.

PHOTO ESSAY: Scenes from the first day of the grad student strike

Columbia has urged graduate student union supporters to allow the University to resolve the union debate in court, rather than through actions that would interfere with student’s educational progress. In an email last week, Provost John Coatsworth argued that unionization is inappropriate because all graduate students would have to pay dues and be represented by UAW regardless of their personal support for the union.

In a statement given to Spectator Tuesday, a University spokesperson reiterated Columbia’s reasoning for not bargaining, adding that the University “do[es] not understand why the GWC-UAW prefers the pressure tactics and disruption of a strike to a definitive, non-partisan resolution of that legal question in the federal courts.”

Many professors have relocated classes during the strike to off-campus locations, and classes taught by graduate students—including core classes—have been cancelled in the coming week.

Keeping with the day’s theme of race and immigration, leaders from the Students of Color Alliance, the Black Students’ Organization, UndoCU, the Liberation Coalition, and the Native American Council spoke in front of the crowds on Low Steps. At the tail end of the day, civil rights activist and co-founder of the United Farm Workers Dolores Huerta gave a speech and led a chant of “Sí, se puede.”