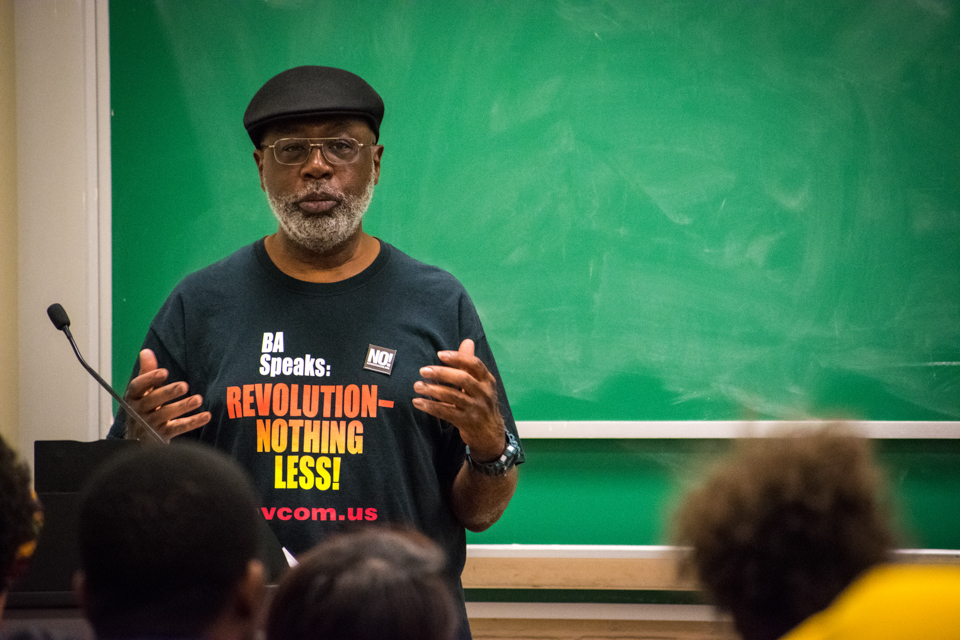 Carl Dix, an activist in the 1968 protests, was the featured speaker during the second of BSO’s three-day speaker series in commemoration of the 50th anniversary of 1968.

Carl Dix, founder of the Revolutionary Communist Party, described 1968 as a radical era of protests at a panel on the relationship between capitalism and gentrification Wednesday night.

“Here was a time when it was being dragged out into the open for everybody to see that black people did not get freedom in this country,” Dix said. “The whole world was watching.”

The event, sponsored by Columbia University Black Students’ Organization and Habitat for Humanity, featured Dix, along with Katrell Lewis, Advocacy and Community Engagement Manager at Habitat NYC. Both discussed their experiences with racism and gentrification on a panel moderated by BSO member Mike Mugerwa, CC ’21.

The event was the second of BSO’s three-day speaker series in commemoration of the 50th anniversary of Columbia’s 1968 protests. Raymond Brown, former chair of the Students’ Afro-American Society, spoke on a black alumni panel on Monday.

Dix, who was drafted into the Vietnam War in 1968 and then jailed for refusing to fight, recalled events such as the assassination of Martin Luther King Jr. that sparked a wave of protests that “drew upon radical and revolutionary forms of resistance.” At that time, tensions also increased between Columbia administration and the student body, in addition to residents of Harlem, when the University attempted to build a gym in Morningside Park that would only be accessible to the locals through a basement entrance.

According to Dix, broader national incidents, in conjunction with Columbia’s decision to build a gym in Harlem, revealed the University’s responsibility in perpetuating a system of fascism and racial segregation.

“They always said, ‘we want to be neighbors with the Harlem community’—and then you found out what kind of neighbors they wanted to be. They had everything but a moat,” he said. “It ain’t just a Harlem problem. You can go to Brooklyn. You can go to Chicago. The housing projects have been destroyed because someone discovered that they were sitting on valuable land. Far too valuable for poor black people to use.”

Extending his focus beyond Columbia, Dix described instances in which the government criminalized black individuals through the war on drugs and petty crime. In 1996, he personally founded the Coalition to Stop Police Brutality, Repression, and the Criminalization of a Generation, and has since argued against stop-and-frisk policies in New York City.

Dix said that the only solution to ending racism and classism is revolution, specifically through a new communist framework—combining Leninist, Maoist, and Marxist theories—developed by the current chairman of the RCP, Bob Avakian. Within the context of the current system, Dix categorized the current oppression of black people as a genocide, citing instances of mass brutality and shootings by the police.

“I call this current system a genocide because that is what it scientifically is. It doesn’t start with people lining up against the wall and killing you. … Black people are being put in a situation where they cannot survive and thrive as a people,” Dix said. “These are horrors built into the very way that this system functions unless and until revolution occurs.”

The second half of the event focused on gentrification and its impact on local communities. Lewis, who has worked with city councils and participated in projects to create more affordable housing and stop gentrification, focused on state legislation that he argued encourages gentrification by giving property owners the power to set arbitrary rent prices for their tenants.

Lewis encouraged students to get involved by learning more about property ownership through conversations with the city council and with those displaced by gentrification. His organization, HFH, works with individuals at a state level to advocate for housing policies that build and preserve more equitable communities.

According to Dix, when taking into account all of these factors, the impacts of capitalism and racism on individual lives is often underplayed.

“There are lives hanging in the balance. This is real stuff. I’m not just hyping shit up,” Dix said.

Tomorrow’s event will feature the screening of “Columbia Revolt,” a documentary on the Columbia protests of 1968, hosted in collaboration with V-day Barnard, Men of Color Alliance, and Columbia University Undergraduate Student Life.