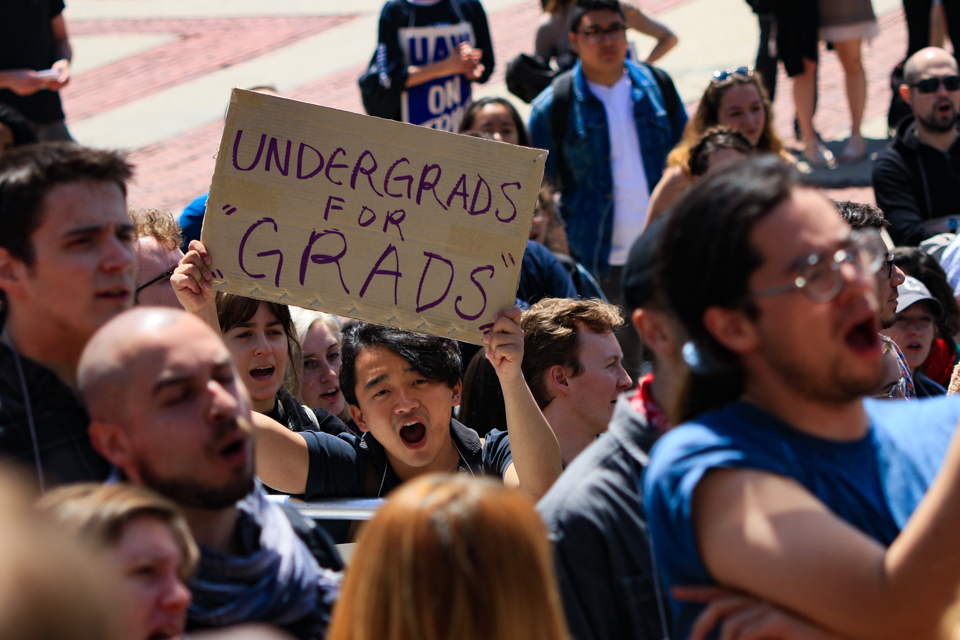 Increased involvement by undergraduates in today’s movement for graduate student unionization has led both groups of students to become more unified.

One day after the 50th anniversary of the start of the historic 1968 protests, undergraduates joined graduate students in their weeklong strike for unionization, demonstrating a significant shift in a once contentious relationship.

On April 23, 1968, protests broke out on Columbia’s campus over the construction of a segregated gym in Morningside Park and the University’s stance on the Vietnam War. Today, these protests are remembered as mainly undergraduate-led, but graduate students played a large role in ensuring the success of the protests through their leadership positions.

Over the course of the 1968 protests, graduate and undergraduate students disagreed on the organization and goals of the protests, leading to public disagreements between the two groups. Graduate students criticized the commitment of undergraduate protesters to the movement and wanted to focus on the consequences for the local community, while undergraduates wanted to concentrate on fundamentally changing the University and the country as a whole.

Nina Schooler, GSAS ’69, who studied in the department of psychology, said that in 1968 the two groups of students did not interact frequently.

“The sense of the graduate student was just very, very different from the sense of being an undergraduate,” she explained. “It just did not feel as though we were part of the same community.”

Carolyn Eisenberg, GSAS ’71, said that undergraduate students wanted the impact of the protests to extend far beyond the specific issues of the gym in Morningside or the Vietnam War, which often led the media to portray leaders of Students for a Democratic Society as “revolutionaries.” In contrast, graduate students at the time were mainly concerned with how the University’s decisions would affect the surrounding Harlem neighborhood.

Kate Jackson, a graduate student studying political theory in the Graduate School of Arts and Sciences, has worked with undergraduates as a TA for six years for multiple classes.

“I’m TAing for a 4000-level class, so I have experience as their colleagues and as workers. I feel as if we’re part of the same community,” Jackson said. “I don’t see our interests diverging a lot.”

“They’re exceedingly helpful because our supporters have taken care of communications, public relations, and community support that we would have had to otherwise build with the students,” Jackson said. “We’re very blessed that we have such support amongst undergrads.”

“I think that teaching assistants are really vital to our education at Columbia, whether by leading discussion sections, or grading our papers, or helping us in office hours to help us understand complicated material,” Meghan Brophy, BC ’20, said.

“I want that experience to be one that’s fair for people who can’t afford to go to an additional seven years of school without being paid for their time,” Adler said.

Increased involvement by undergraduates in today’s movement for unionization has led both groups of students to become more unified.

Trevor Hull, a current graduate student in the Graduate School of Arts and Sciences, said that common problems with the administration can be a source of integration between undergraduate and graduate students.

“Maybe that’s the uniting factor: Everybody sees how the administration acts, it’s very obvious what their interests are. … If the administration is not doing anything to improve your treatment here, it’s not hard to imagine that others are going through it as well,” Trevor said.