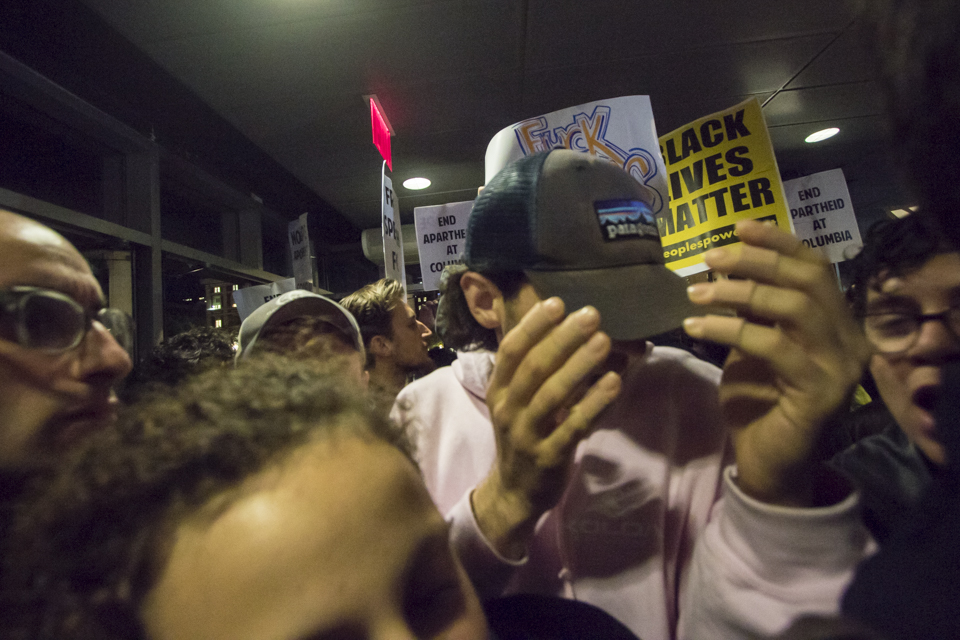 As in 1968, Columbia still students cannot protest inside buildings, meaning protests must be held outside where they are subject to Public Safety’s crowd control tactics, including setting up portable gates and blocking off areas of campus.

By restricting access to Lerner and setting up portable gates, notably during Columbia University College Republicans events featuring controversial guest speakers this year, Public Safety has limited the capacity in which students can express their dissent in recent years with the goal of preventing violent clashes amid protest.

“Physical space is important because if we weren’t granted that, where else would we demonstrate?” Bryn Evans, CC ’21, said. “The University takes measures to minimize that as much as possible because we’re seen as disruptions and disturbances.”

On April 23, 1968, protesters assembled across Columbia’s campus, occupying Hamilton Hall in solidarity against Columbia’s connection to the Institute for Defense Analyses and a gym which was to be constructed in Morningside Park.

In September 1967, Grayson Kirk, then president of the University, released a statement banning protests inside University buildings. According to Alexander Piatt, the associate dean of the College at the time, this ban was made in anticipation of protests later that academic year. The policy reversal was criticized by the Columbia College Student Council as a “blow to free speech.”

Rudd, who was expelled after leading the Columbia chapter of SDS during the protests, explained that the administration justified the ban on indoor protests in 1967 because “they didn’t want disruption.” Despite the regulation, Rudd and hundreds of other students occupied five university buildings, including the president’s office.

On May 22, 1968, President Kirk released a statement justifying the decision to clear protesters from occupied buildings by claiming “the overwhelming majority of our faculty and students were being forcibly prevented by a small minority from pursuing their normal academic activities.”

When asked by the Spectator this year about the current status of campus space, Rudd said protesting has become even more regulated in recent years.

“If you’re outside a building screaming it’s not the same thing as being inside,” Rudd said. “Now they’re not only restricting inside versus outside—even in cities in general—but also where people can protest outside. A lot of people object to that. It’s like being put in a zoo, or a cage.”

Current University policy echoes concerns for the disruptive nature of protests. A student involved in a rally or picketing is considered in “serious” violation of the Rules of University Conduct if a person “physically prevents … passage within, or unimpeded use of, a University facility, and thereby interferes with the normal conduct of a University function.”

The Rules also give the University and Public Safety the right to “reasonably” regulate “the time, place, and manner of certain forms of public expression” in order to “protect the rights of free speech, free press, and academic freedom.”

Isaiah Hines, CC ’21 and member of the Liberation Coalition, Student Workers Solidarity, and Students for Justice in Palestine spoke to the fact that what warrants “reasonable” regulation can be liberally interpreted by Public Safety officers on the scene of a protest.

Hines specifically pointed to the safety measures that were taken at the protest for Right to Work President Mark Mix, such as setting up portable gates and increasing the amount of officers stationed at the site, restricting access for students who were deemed to be protesters.

As in 1968, Columbia students still cannot protest inside buildings, meaning protests must be held outside where they are subject to Public Safety’s crowd control tactics.

During a protest for a CUCR event featuring white supremacist Mike Cernovich last October, Spectator reported that “Public Safety officers prevent[ed] anyone from entering Lerner Hall for a period of time.” Instead, protesters were forced to congregate outside the building where the speech was taking place.

Four months later, at the protest against Mix, protesters were contained within a short strip of metal barricades outside Lerner on the Broadway side.

Public Safety has also intervened on a more individualized level. Jared Sacks, a Graduate School of Arts and Sciences student who has protested at several CUCR events this academic year, said that Public Safety officers confronted protestors directly during a rally at the CUCR Tommy Robinson event in October. Sacks said that, while Public Safety officials did not physically remove anyone from the event, they confiscated several Columbia IDs from students in the crowd.

Ty Jones, SSW ’19, a leader of the Liberation Coalition, which has helped organize several protests this year including the demonstrations against Cernovich and Robinson, was frustrated by Public Safety’s interferences.

“They obfuscated certain areas of the campus in order for us not to enter,” Jones said.

Despite Columbia’s activist roots and its unwavering advocacy of free speech, limitation of protest space has restricted demonstrators of today from a proper platform for voicing concerns.

Vice President for Public Safety James McShane was not made available for comment on this article.