1968 to Now: Fifty years after police violence, University has little oversight of NYPD presence on campus

1968 to Now: Fifty years after police violence, University has little oversight of NYPD presence on campus 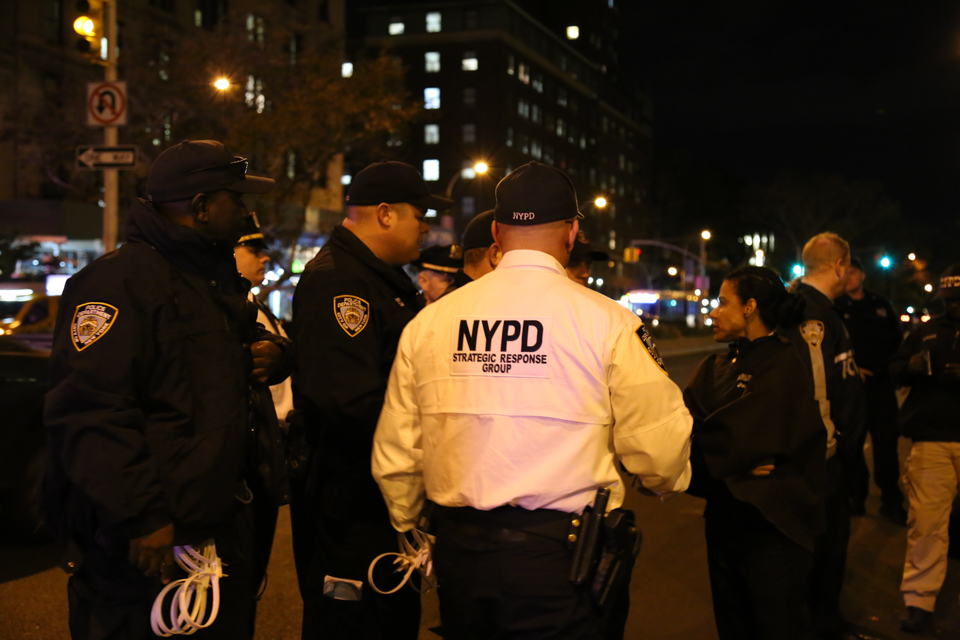 While no Columbia students have been arrested at a protest on campus since 1996, police presence at demonstrations has remained a concern for students.

Raymond Brown was the leader of the Student Afro-American Society in 1968 when the group occupied Hamilton Hall to protest Columbia’s construction of a gym in Morningside Park. The protest lasted until students were arrested for trespassing by New York Police Department officers a few days later.

“It’s only in the context of a demonstration … that people focus on these questions, as opposed to saying ‘this is a core question,’” said Brown. “Use of police power in a direct sense affects dialogue and other critical issues.”

While no students have been arrested at a protest on campus since 1996, police presence at demonstrations has remained constant from year to year.

Public Safety maintains that it communicates regularly with the NYPD, which is often on campus during protests. But at multiple protests in recent years, the University made it clear that they were not aware of NYPD presence on campus or did not predict that police officers would be on campus when they actually were.

In 2015, students voiced concerns about heavy unexplained NYPD presence at a Columbia Divest for Climate Justice protest and 2014 Tree Lighting die-in. After police arrived, the University said it did not alert or ask the NYPD to come onto campus.

Last semester, when white supremacist Mike Cernovich came to speak on campus at an event hosted by CUCR, both uniformed and plainclothes officers were on campus. Although the University stated that police were not present on campus during the protest, video footage shows a man in plainclothes flashing a badge, as well as uniformed police officers arresting a person who was not a student in front of Lerner.

Despite the NYPD’s working relationship with Public Safety, the Rules of Conduct do not preclude police from coming onto Columbia’s open campus. The NYPD is not required to declare its presence when plainclothes officers enter campus.

Today, some students, particularly students of color and undocumented students who historically face greater risks when interacting with police, feel unsafe due to unannounced NYPD presence on campus during protests. This fear stems largely from the overall lack of transparency surrounding the respective roles of the NYPD and Public Safety, their relationships on campus, and the similarities in their uniform.

These anxieties follow the most egregious use of force against Columbia students on campus fifty years ago. In 1968, then-Columbia President Grayson Kirk’s request that NYPD officers forcibly remove student protesters from the buildings they were occupying prompted national outrage and ultimately lead to Kirk’s resignation.

Rising tensions came to a head early in the morning of April 30, 1968, when, sanctioned by the University, over 1000 police officers entered campus and arrested close to 700 people, injuring more than 100 in the process. Groups of plainclothes and uniformed officers repeatedly chased, beat, and arrested students and demonstrators in and around many buildings.

In a statement to Spectator, a University spokesperson said the use of police during the 1968 protests violated the values of the school and today the University aims to strike a balance between safety and the rights of individuals, using Columbia’s past as a guide.

Today, the Rules of Conduct state that if the President wants to request uniformed police to terminate a demonstration, as the NYPD did in 1968, they must consult with the University Senate’s Executive Committee before doing so. The Rules state that this decision would only occur if a demonstration “poses a clear and present danger to persons, property, or the substantial functioning of any division of the University.” In the past year, there have been no events where the President called in external assistance.

While the objective of police presence in the past year has not been to terminate protests, in some cases Public Safety has requested NYPD assistance to provide extra security at demonstrations. In other cases, the NYPD may provide extra coverage preemptively for events they expected to attract large crowds beyond campus gates.

Many students interviewed, including those involved in organizing student protests, expressed confusion over how and when police can be on campus. Some believed that police can only enter campus when they are explicitly invited by the University.

Contrary to this belief, since Columbia is an open campus, police, including plainclothes officers, can enter campus without having to declare their presence.

This concern with policing is exacerbated by the fact that students are not notified of NYPD presence on campus.

“There’s no notification,” said a representative of UndoCU. “In fact, last year, the two biggest protests that we organized and participated in, in November and January, both of them had major police presence. For whatever reason, a campus protest warrants this kinds of police activity, and that’s especially alarming for students who are in our situation.”

“A lot of people have expressed to me that they feel unsafe, they feel like they can’t be out there on the front lines of these protests,” said student activist Isaiah Hines, who is a member of Students for Justice in Palestine, the Liberation Coalition, and Student-Worker Solidarity.

Though Public Safety officers are unarmed and do not have the power to arrest, the department is closely affiliated with the NYPD. Vice President for Public Safety James McShane previously served as the executive officer of the Narcotics Division of the NYPD, and much of Public Safety’s upper management used to serve in the upper ranks of the city’s police force. McShane was not made available for comment on this article.

Many students are unclear about how the roles of Public Safety officers differ from those of police. While Public Safety’s Annual Security Report says that the department shares crime prevention strategies and local crime information with the NYPD, a document detailing their relationship to the NYPD is not made public to students.

Though Public Safety’s roles and responsibilities differ from those of the NYPD, their close association can lead students of color to feel afraid of University security.

“I think there is, for people of color, an instinctual reaction to people in those outfits,” said Ty Joseph, SSW ’19.

While the students interviewed are current members of Columbia’s community, their feelings of being marginalized by campus policing are not new. In 1968, Brown recalled constantly being questioned for his identification by campus security officials even before the violence of the protests.

“In this middle of this thriving city, you have this community that’s supposed to have a special openness to its own members,” said Brown. “If part of that community is treated like pariahs by the security forces, you’ve already begun to limit that openness in a way that is paralyzing.”