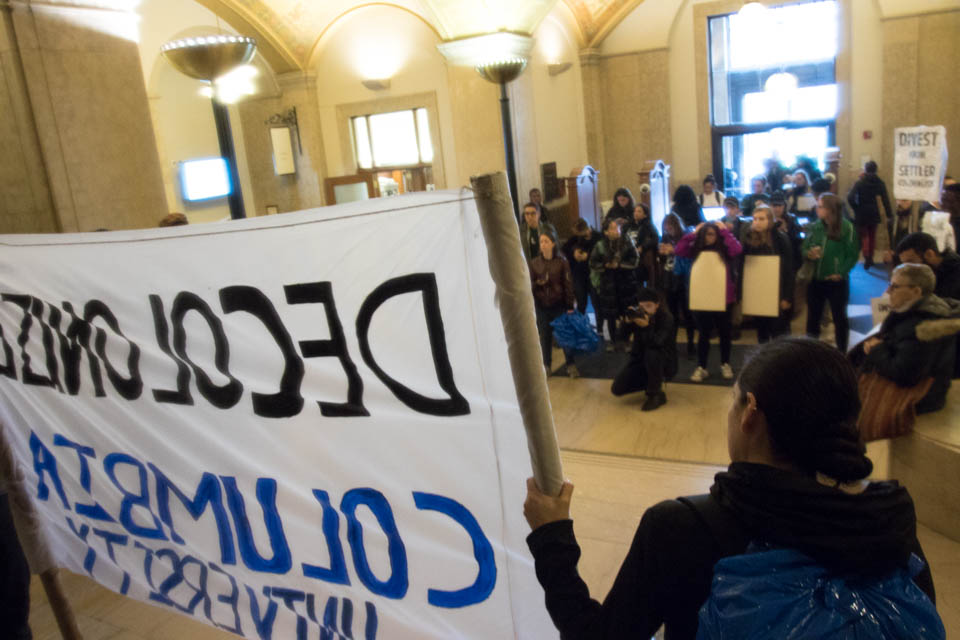 Protesters demanded the University replace and rename statues, such as the Thomas Jefferson statue outside the School of Journalism, make its curricula more diverse, increase faculty diversity, recognize the debt owed to marginalized peoples, and recognize the decision by graduate students to unionize.

Protesters demanded the University replace or rename statues, make its curricula more diverse, increase faculty diversity, recognize the debt owed to marginalized peoples, such as the Lenape people, and recognize the decision by graduate students to unionize.

As demonstrators attempted to climb the main stairwell onto the third floor, they were stopped by Dean of Students for the Law School Yadira Ramos-Herbert and a Public Safety officer. Ramos-Herbert informed the group that if they advance any further up the stairwell, they would be in violation of the Rules of Conduct and would face disciplinary action from the University.

Ramos-Herbert asked the students to leave because they were disrupting those trying to study, but protesters remained on the stairwell for about 30 minutes before finally leaving. While there, protesters called out the crowd of students gathered around the stairwell, many of whom were taking pictures and filming the demonstration.

“You have acres of colonized land to study on … You’re not studying, you’re out here complaining,” said Liberation Coalition member Ty Joseph, SSW ’18. “I hope you are being disturbed.”

One student confronted the protesters as they began to climb the stairwell, shouting repeatedly that they were disturbing the library only one week before finals begin, before Ramos-Herbert asked him to step back.

The protest was organized by members of the Liberation Coalition and The Native American Council, who marched with a large banner reading “Decolonize Columbia University.” Joseph said they also organized in conjunction with the protests of the graduate student union, whose strike is now in its second day.

The group had broken off from the main graduate student picket lines around 1 p.m. and walked around campus to various locations as part of a tour denouncing statues and locations on the campus they believe to be affiliated with white supremacy—including a statue of Thomas Jefferson—before entering Butler, the last stop on the tour, around 1:30 p.m.

Around 2 p.m., the group left Butler and dispersed outside.

The University did not immediately respond to Spectator’s request for comment.