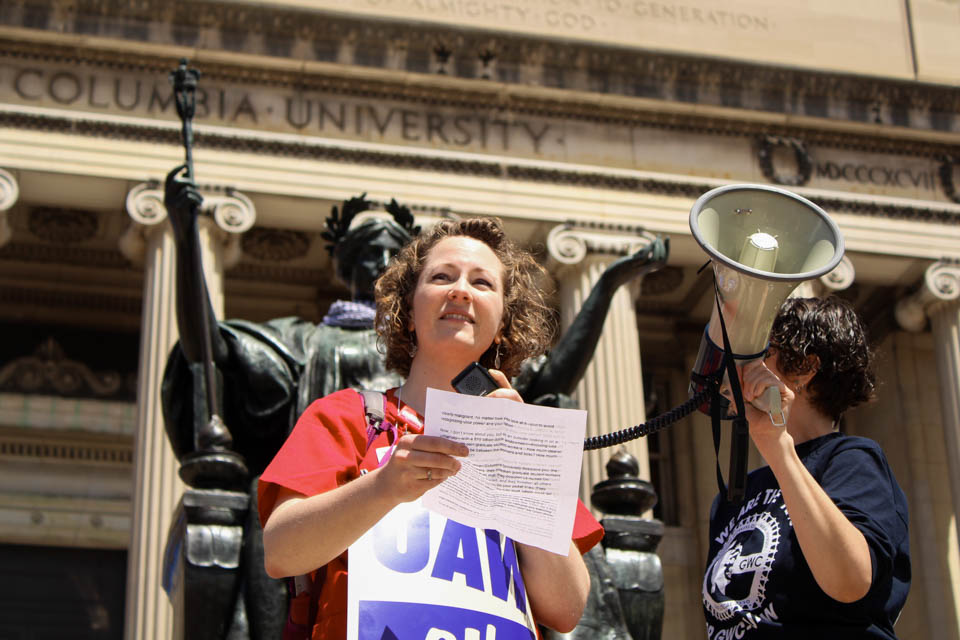 Julia Symborski, a registered nurse at Columbia University Medical Center, a member of the New York State Nurses Association, and vice president of the 3,600 nurses who work for Columbia, attended to stand in solidarity with the graduate workers.

On the third day of the graduate student strike, graduate students initiated a petition to continue the strike indefinitely and picketers were forced to adapt to a last-minute change in location after threats of legal action from the University.

The strike comes after the University pursued continuous legal tactics to avoid recognizing the graduate student union, which has sought access to better working benefits, improved health and dental care, and more action against sexual harassment. Since Tuesday, graduate students have been picketing on College Walk for four to five hours each day, chanting pro-union slogans, marching across campus, and blocking entrances in an effort to get the University to bargain.

Union bargaining committee member Olga Brudstova, a PhD student in Civil Engineering and Engineering Mechanics, said on Thursday that extending the strike is still a distant possibility, and would need to be decided by a majority of union members.

“We haven’t decided about it yet because it only was launched yesterday, and we already started to discuss it,” she said. “Whatever we decide will be decided collectively, and we will try to include workers on the ground.”

Only one week from the start of final exams, an extended strike would pose many problems for undergraduate students. However, both Barnard and Columbia have sent emails to their respective undergraduate student bodies assuring that the strike will not affect graduating seniors from receiving their degrees.

The strike has received overwhelming support from renowned political figures over the course of the week. Life-long American labor organizer Dolores Huerta joined grad students in solidarity on Wednesday, and Michael Higgins, the president of Ireland, met with graduate student strikers Thursday morning before delivering a speech in Low Library as part of Columbia’s World Leaders Forum, offering his support and promising to mention the strike in his speech. Both New York gubernatorial candidate Cynthia Nixon and New York City Mayor Bill de Blasio took to Twitter to express their support of the union, with de Blasio even using the hashtag #CUBargainNow.

Though Thursday’s picketing had been scheduled to take place at CUMC, according to an update posted to the GWC website Wednesday evening, the University said the union had not filed the necessary 10-day notice to strike at a health care institution. Although the union claims that it specifically chose to picket at the Hammer Building—which contains classrooms and labs—to avoid this conflict, it nevertheless moved the day’s demonstration to the Morningside campus in less than 24 hours in order to avoid another legal dispute with the University.

The day’s demonstration also featured STEM graduate workers, who made speeches about the difficulties of being a research assistant at Columbia, calling for the University to come to the bargaining table.

The University did not respond to Spectator’s request for comment made on Thursday morning. In earlier statements, a spokesperson reiterated the University’s objection to the notion that grad students should be considered workers and questioned the decision to strike.

Despite the last-minute change of location, many CUMC workers, who constitute 20 percent of the union, joined the picket line on the Morningside campus.

Many undergraduate students have similarly joined the picket line or extended their support, although some remain apprehensive about the effects of the strike on their ends to the semester.

Claire Roth, BC ’19, questioned how students’ papers and exams would be graded without TAs.

“I think it’s definitely hard for undergrads, because that would definitely screw us over in terms of who would grade our exams and I feel like we wouldn’t get our grades until way later in the summer.”

Nevertheless, Roth expressed her support for the extended strike.

“I wouldn’t want them to not get what they’re asking for. So if that’s what they have to do, you know, we’ll just deal with it,” she said.

“This is not a centrally planned union action. A couple of us saw the turnout on these first few days and felt that there was enough momentum going to actually extend the strike beyond the original period.”

Jared Sacks, who has also played a role in circulating the petition, said that an extended strike will force the University to come to the bargaining table.

“With our collective power we will bring the University to a standstill—you can’t grade without us.”

Sacks added that the union will likely bring the petition to a vote on Monday.

However, a vote to extend the strike may place an added tension between teaching assistants and research assistants in the union, as RAs might have to put their research on hold if the strike were to continue.