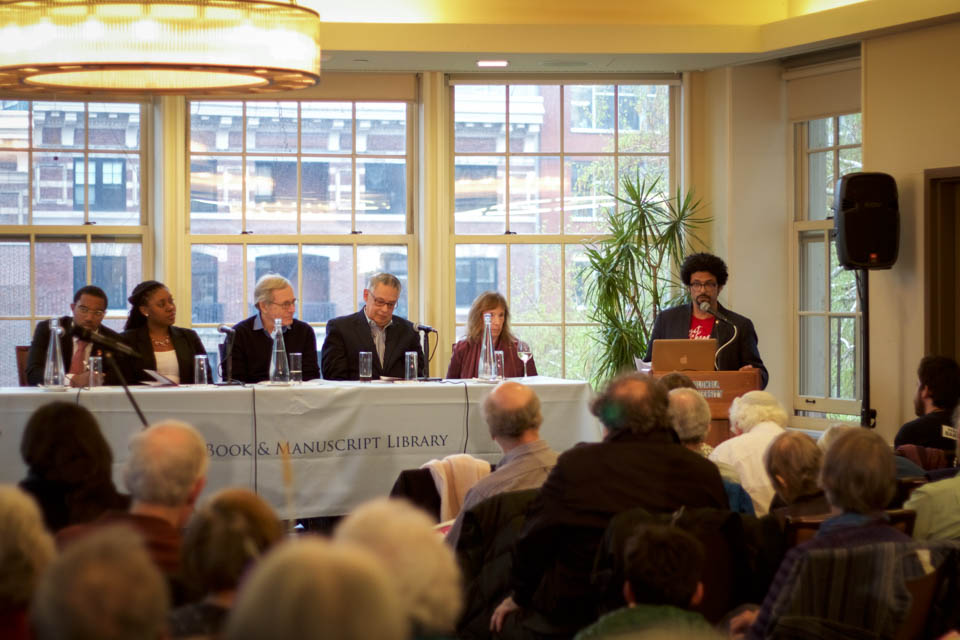 While Provost John Coatsworth was scheduled to make the opening address, his entrance was interrupted by two men with guitars, who played the opening chords to union anthem “Solidarity Forever,” prompting members of the graduate student union in the audience to rise and begin singing.

Current student activists and alumni who participated in Columbia’s historic 1968 protests voiced their support for the graduate student union at a talk on the legacy of student activism Friday night.

The event was hosted by the Rare Book & Manuscript Library, the Lehman Center for American History, and the history department as part of a two-day conference commemorating the 50th anniversary of 1968.

The discussion was moderated by history professor Frank Guridy, who teaches a class about 1968 and who emphasized the need for more deliberate conversations about the significance of the events of 1968 today.

“It is a time for commemoration and reflection, but it’s also a time for engagement and debate,” said Guridy.

While Provost John Coatsworth was scheduled to make the opening address, his entrance was interrupted by two men with guitars, who played the opening chords to union anthem “Solidarity Forever,” prompting members of the graduate student union in the audience to rise and begin singing. The students were joined in song by nearly all of the alumni present, who read off flyers that had song lyrics rewritten to convey the graduate students’ demands.

“It is we who grade the paper and prepare the syllabus. We hold office hours daily, give advice that you can trust,” sang the crowd.

“On behalf of the University, I want to acknowledge and thank all of you who participated in the events at Columbia fifty years ago,” said Coatsworth.

“What about this week?” someone called from the crowd.

Raine, who spoke directly after Coatsworth, said that the graduate strike represents a return to the revolutionary student spirit of 1968, condemning Coatsworth and the administration for their refusal to bargain.

“John Coatsworth today continues one 1968 tradition; not the one we all come here today to celebrate, but the tradition of standing militantly on the wrong side of history,” he said.

Throughout the event, Guridy showed clips of recently released documentary “A Time to Stir,” which includes over 100 interviews with former students detailing their experiences during the 1968 protests.

“The clips captured the energy and honestly the spontaneity of the moments,” said Biberman. “We didn’t really know what we were doing—which isn’t to say we did not understand what the big issues were.”

Gonzalez recalled the radical effects of protests on his worldview, emphasizing the importance that the demonstrations had in politicizing students.

“When you occupy a space in a society that is completely distinct from the rest of society, you learn a new way of thinking,” he said. “We created a liberated space for a short period of time and that stayed with us for the rest of our lives.”

However, as the groups leading campus protests were largely white and male-dominated, much of the media coverage of 1968 highlighted the efforts of white activists, ignoring the students of color who in many cases spearheaded the demonstrations.

In light of this history, Redd and Sims-Agbiabaka called on today’s activists to recognize and support the movements of students of color, particularly black students, with Redd citing his concerns with the 2016 creation of the Barnard Columbia Solidarity Network.

“Black students were only called into that solidarity network as an afterthought,” he said.

Bhattacharyya, a Graduate Workers of Columbia organizer and union bargaining committee member, affirmed the the union’s commitment to addressing these concerns.

“The union, in its very foundation, has to include international student and people of color and make an active digging effort to reach out to these people and make them a part of the thinking of the union itself,” she said.

Despite current concerns with the role race and identity play in modern activist movements, some alumnae took issue with the way the 1968 protests are talked about and portrayed today.

“I think Mark Rudd has been apologizing for too long and not spending enough time emphasizing the positive aspects of what came out of 1968,” Foner said.