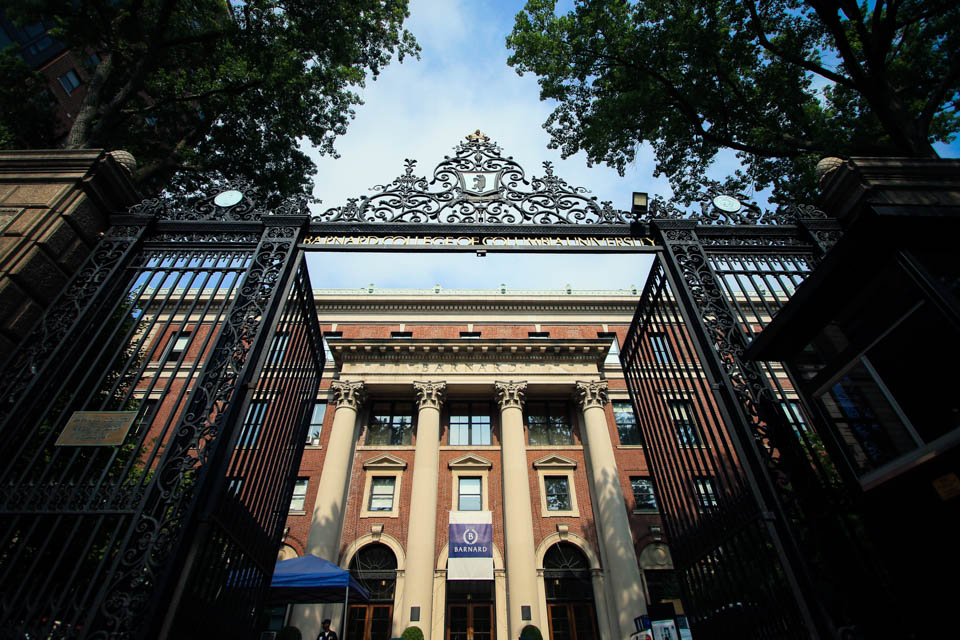 Of the more than a dozen current scholars interviewed by Spectator, many said the Athena Scholars Program's focus on corporate development fails to acknowledge the various other fields in which women lead.

Barnard’s Athena Center for Leadership Studies, once praised as an innovative approach to leadership education, is facing criticism from current scholars who say the scope of the Center’s Athena Scholars Program’s curriculum is too narrow.

After almost a decade, the Athena Center, which was launched by former President Debora Spar in 2009, is at a crossroads as it undergoes leadership changes and is considering how to best serve students going forward. Kathryn Kolbert, who has served as Constance Hess Williams ’66 Director of the Athena Center since the center opened, announced in February that she will be leaving her role in June.

Amid this major administrative change, students have raised concerns regarding a lack of curriculum diversity, a narrow view of what leadership looks like that emphasizes corporate and political roles, and a lack of opportunities that effectively address the needs of STEM majors.

The Athena Center has begun a nationwide search for Kolbert’s replacement and has held a series of conversations to gain input from students regarding what changes they would like to see from the Athena Scholars Program, a “co-curricular and experiential learning program” that supplements a Barnard degree with courses that teach students how to be effective leaders. Since the program began in 2010, it has graduated more than 225 students.

In order for students to complete the program, scholars have to complete a series of five courses, six leadership labs, and a senior practicum. Of the nine leadership labs offered this past semester, one had an explicitly corporate focus, while others have emphasized skills applicable to other fields. The required Women in Leadership course, however, centers on examples from the corporate or political world.

Of the more than a dozen current Athena Scholars interviewed by Spectator, many said this focus on corporate development fails to acknowledge the various other fields in which women lead.

Christina Saint Louis, BC ’19, said that she and her friends first noticed the singular focus behind the program’s curriculum when they took Women and Leadership, a required course that all scholars must take to graduate.

“At least from the interests I perceived and the way they pursued topics in class, it was more corporate finance-driven leadership styles,” Saint Louis said. “The curriculum itself did not even lend to other types of leadership like organizing or protesting or more grassroots styles, which is what I would have liked to have seen.”

However, Aku Acquaye, BC ’18, stated that while Barnard does not always address diverse perspectives in its curriculum at large, when she took Women and Leadership she felt that her professor was successful in addressing the diverse experiences of women by incorporating readings that focused on various intersections of identity.

“The curriculum that tends to be associated with Barnard in general tends to be very white-washed, but when I took Women and Leadership we talked about Chicana women, we read Separate Roads of Feminism—which talked about white feminism—chicana feminism, and black feminism, and how all three evolved,” Acquaye said.

In addition to the complaint that the curriculum fails to acknowledge various forms of leadership, students majoring in science and math fields as well as humanities and social sciences said they found the curriculum repetitive, as the material covered in class often addresses issues that the scholars are already familiar with.

“We all know that those are issues because we are all women looking to go into the workplace. We know that there is a gender pay gap, we know that that pay gap is different based on your ethnicity, all of these things were very elementary,” Caitlyn Morris, BC ’18, said. “I felt like a first-year Barnard student. I didn’t feel like I was being challenged as a junior or as a senior Athena scholar.”

For Samantha Shih, BC ’20, who is a neuroscience major, the curriculum was similar to the seminars she has taken at Barnard.

“I really like it [the women and leadership class]. Because I take so many science classes I haven’t had as many of the seminar experiences… but I found that in general, a lot of the themes in the class are repetitive from the other electives I have taken,” she said. “It is a very cohesive program, but at the same time there’s not really that much this semester that has been illuminating.”

However, the Athena’s corporate and political emphasis is not only present in the classroom, but also in the Leadership Labs, in which students workshop leadership skills, and Power Talks, in which notable female leaders speak to the Barnard community. Though only three of the last ten Power Talks in the last three years had a specifically corporate or political message, students said they felt that those messages came through the strongest.

“I’ve been to events where they’ll repeatedly say, ‘If you’re not running for office, my goal is to convince you to run for office by the end of this.’ Or there will be such an emphasis on politics and the political structure or thinking about gender dynamics in corporate environments,” Anisa Tavangar, BC ’18, said. “I think all of that is important because all of that does need to happen, but it’s not the only thing that needs to happen and that’s not the only way that leadership manifests itself.”

In addition to complaints surrounding the lack of diversity within the curriculum, STEM is similarly not well-represented. Although the Athena Center has created new initiatives to improve the experience of STEM majors, including the Athena Digital Design Agency, a program that teaches introductory coding to 40 students each semester, out of the 110 electives on the Athena Approved Elective List, only 2 Chemistry courses and 7 Psychology courses are offered and very few Leadership Labs have to do with STEM fields.

Morris said that this sends the message to students that leadership is not important in STEM.

“To inadvertently say that leadership can’t happen in STEM fields is ridiculous. It is a part of Barnard not valuing STEM,” Morris said.

But President of Athena’s Student Advisory Board Demme Durrett, BC ’19, believes that sufficient efforts are already underway to ensure that STEM students are included, such as offering electives targeted to STEM students and ensuring that a student majoring in STEM is on next year’s board. In an email to Spectator, Kolbert also emphasized that there will be a push to include more STEM courses in the future in order to encourage more STEM students to join the program.

Additionally, at least one of the Athena Distinguished Fellows from each of the last three years has been a leader in STEM, including Minerva Tantoco, Manmeet Kaur, and Joan Fallon.

Despite this issue, Shih said that while she finds it refreshing to be able to take more humanities courses, there are still not many electives that count toward her major nor elements of the curriculum that address the experiences of women in STEM.

“It hasn’t been as much of an issue for me because I’ve loved it as an excuse to be taking more humanities classes, which I also enjoy just as much,” Shih said. “[But] the articles we read and the women that give examples of their paths and their journeys have not been women that are in science.”

Throughout the month of April, students, whether they have participated in Athena Center programs or not, were invited to attend listening sessions with Chief of Staff for the Athena Center Victoria Gordon. Information gathered from these meetings will be included in a report that will help inform President Sian Beilock as she plans for Athena’s future.

Durrett emphasized the importance of providing feedback to those in charge of the Athena Scholars Program and to the board, citing that the Athena Center’s recent decision to add another STEM elective option of Organic Chemistry Lab came as a result of student feedback.

“We want feedback,” Durrett said. “We really want to make sure that we are doing the representative part of our role.”