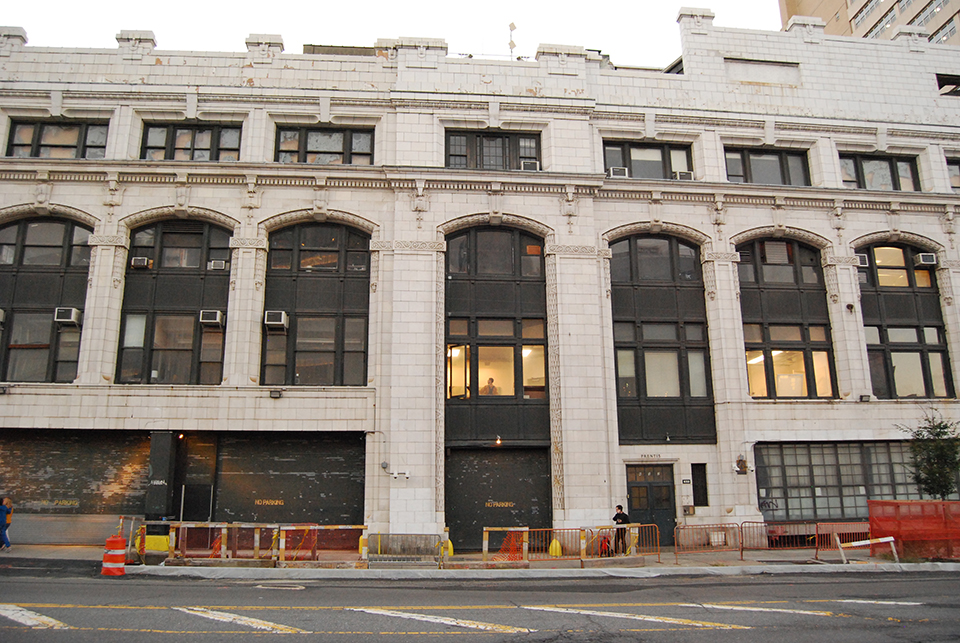 The majority of students in the Visual Arts program are given studios in Prentis Hall, pictured, where they face temperatures above 90 degrees or below 40 degrees, poor air quality, flooding, pieces of limestone falling from the ceiling, and a limited number of studio spaces and options.

When Elsa Lama, SVA ’18, chose to attend Columbia’s Masters of Fine Arts Visual Arts program in 2016, she was drawn by the promise of participating in an interdisciplinary program with renowned faculty, peers, and the resources of an Ivy League university.

Two years later, and a few weeks from graduation, Lama, along with 51 of the 54 students in the program, has demanded a full tuition refund for the 2017-18 academic year, stating that she has not received the education that she was promised.

In her studio in Prentis Hall, Lama has faced freezing temperatures, flooding in the hallways, and pieces of limestone falling from the ceilings. She has not been able to meet several of the professors that she came to Columbia to work with, including Sanford Biggers, an internationally acclaimed artist who has been on sabbatical for more than two years. And she, along with her classmates, has spent countless hours reaching out to facilities, writing letters, and sitting in meetings with Columbia administrators.

“I came here on the premise that these were the two years of my life that I could fully invest myself and submerge myself into my practice and my work and my career, and a lot of this time was taken by writing letters and meeting with my peers so I could come up with some solution about the most basic [issues] about the roof that we’re under and the temperatures that we live in,” Lama said. “We were promised something that we don’t have and we’re not getting.”

In a statement to Spectator, a Columbia spokesperson said that the University has compensated students who have experienced excessive heat in their studios or those whose artwork has been damaged, adding that Columbia is developing longer-term solutions to improve the studio spaces available to the students in the program. In emails to MFA students, administrators have reiterated the decision not to refund their tuition.

However, according to Jon Kessler, who has been a professor at Columbia since 1994 and was chair of the visual arts program from 2000 to 2005, the program has been facing many of these infrastructural problems for more than ten years, and reached its current state because the administration has not responded to its concerns.

“This has gotten worse and worse, and the University has done nothing about it. Now we find ourselves in a crisis, where we would have had a much better position had they done something,” Kessler said. “[Every year], the new class comes in with all of this optimism… and within their first month, they see a school in crisis, and we’re scared. We worry about bringing another class in.”

Of the eleven faculty members listed on the program’s website, Sanford Biggers, Shelly Silver, and Tomas Vu-Daniel are currently on sabbatical from Columbia, while Nicola Lopez is teaching only undergraduates this semester. Thomas Roma retired from the School of the Arts in January amidst sexual harassment allegations, dealing an additional blow to the program. The faculty members who remain are forced to deal with facilities issues and, more recently, to devote time to helping students coordinate meetings with the administration.

“[The faculty] have gone above and beyond what their role is as a faculty member. They’re in the same boat as us, they’re trying to do the best they can with the restrictions that have been placed from the institution,” said Travis Fairclough, SVA ’19. “[But] half of the faculty that are listed on the website is actually here, which is a huge blow, because the program is largely based on the connections that you have with your faculty members.”

Along with infrastructural issues in Prentis, Kessler explained that the cost of the program has been unsustainable for several years, especially in comparison to programs at peer universities. Tuition for the 2017-18 academic year at Columbia was $63,961, compared to $36,359 for the Visual Arts programs at Yale. Columbia provides a limited amount of financial aid for students in the visual arts program, meaning that some students are more than $100,000 in debt by the end of the two-year program. The program’s website also states that the tuition is expected to rise each year.

“It’s almost criminal to endebt a student $100,000 to be a painter or a performance artist… and if this program was a third of the price, I don’t think we’d have quite the intensity around the tuition reimbursement,” Kessler said.

The visual arts program is studio-based, meaning that students spend hours in their studios each day, and individual and group critiques within the studios constitute the majority of the credit and feedback that students receive.

Yet, the majority of students are given studios in Prentis, where they face temperatures above 90 degrees or below 40 degrees, poor air quality, flooding, pieces of limestone falling from the ceiling, and a limited number of studio spaces and options. Several students receive studios in Watson Hall, which, while a better facility, separates those students from the rest of their cohort and lacks several studio types, including woodshops.

“We don’t have any classes, and I think that makes this stand apart from other issues in other programs. If you have problems with your facilities, and you can’t conduct a studio visit, or you can’t even be in the building, then you actually, literally have no class,” Samantha Nye, SVA ’18, said.

Students said that the issues with their facilities also place a psychological and emotional burden on them, because they are often worried that their artwork could be damaged, destroyed, or moved without their permission.

“I had floods in my studio. I had work damaged because of that, and that’s something that has happened to everyone, and it constantly makes [me] worried that damage might happen, especially because I work with paper,” said one second-year student, who requested anonymity for fear that her student visa may be impacted.

Many students also pointed to a lack of transparency, claiming they were not aware of the problems that the program was facing prior to their arrival at Columbia, and quickly realized that the reality of the program did not meet their expectations.

“I knew that the tuition is very high here [but] I wasn’t aware of the facilities problems or the faculty problems. There are a lot of things that weren’t presented to me,” Fairclough said. “[After orientation] I started to meet the second-year students and they started to tell our year the things that were going on here and the battle that they had been fighting already.”

Current second-year students began meeting with faculty last spring to discuss their concerns, and when they returned in the fall, they joined forces with the incoming first-year students and began to organize and write letters to the administration. Students met with Dean of the School of the Arts Carol Becker several times over the course of the year and eventually had two meetings with Madigan and Coatsworth this spring. Despite the importance of these meetings, students have highlighted how the time spent trying to reach the administration has detracted from their ability to focus on their art and scholarship.

“The amount of time that we have spent talking about this, meeting about this, writing letters to the dean, to the provost, to the president, to our faculty [and] the sheer amount of time that we’ve had to spend as a result of the disrepair of this building that we haven’t been putting towards our art, towards building connections, talking about what we’re studying, that is incredibly frustrating,” Margaret Turner, SVA ’18, said.

Although the University has refused to provide them with a tuition refund, many students said that they plan to keep fighting for compensation, though the group has not yet collectively decided how to proceed.

“A system like this thinks on the fact that the people are only here for two years, so you spend your first semester figuring out what the issue is, the second semester getting all riled up, and by the end, they think that you’re worn out and you’re quiet, or that you graduate and it doesn’t matter anymore,” Nye said. “I kind of get the sense that that’s not exactly how this class is going to deal with it.”