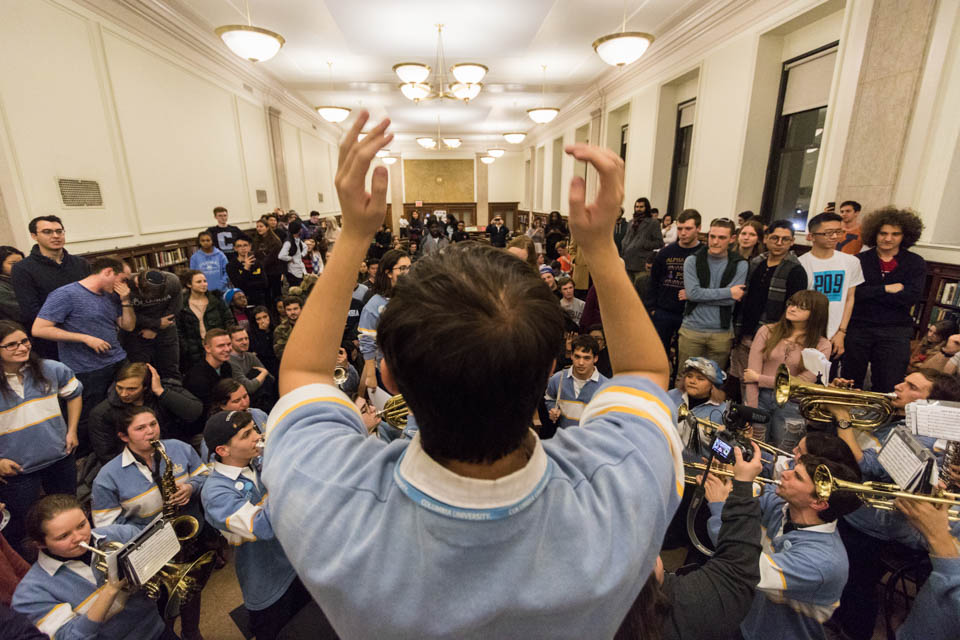 Although the band was not disciplined for last semester’s performance, they received an official warning in April that called for more serious sanctions if they held Orgo Night inside Butler again.

The Columbia University Marching Band plans to hold Orgo Night again in room 209 of Butler Library Thursday night, despite warnings of disciplinary action from administrators that came during ongoing negotiations about the future of the event.

Last semester, CUMB defied a December 2016 directive that banned the group from holding its 42-year-old satirical performance inside Butler due to concerns of disrupting study space. The group snuck instruments into Butler without Public Safety’s notice in a feat that was a result of days of coordination and planning.

Although the band was not disciplined for last semester’s performance, they received an official warning in April that called for more serious sanctions if they held Orgo Night inside Butler again, according to CUMB head manager Vivian Klotz, BC ’20.

Administrative action could entail financial sanctions against the band, which could hurt its ability to travel or attend future athletic events, as well as disciplining individual band members. As a non-officially recognized student group, CUMB receives the majority of its funding from the Office of Undergraduate Student Life and Columbia Athletics, though it also receives support from the Columbia University Band Alumni Association.

This warning came during a series of ongoing negotiations between CUMB board members and administrative figures such as Dean of Undergraduate Student Life Cristen Kromm as well as Vice Provost and University Librarian Ann Thornton that have been taking place since March.

In a statement to Spectator, Thornton expressed the administration’s commitment to continue negotiations with the marching band while also respecting Columbia libraries as a place for studying, adding that she hopes “the band will exercise its judgment and will not undermine this collaborative effort on Thursday night.”

Despite the potential of progress from these negotiations, members of the band voiced uncertainty about the outcome of continued conversations with the administrations. After much debate, the band decided to uphold the tradition of performing inside Butler, and Klotz sent an email Wednesday night to administrators stating that the band intends to enter Butler shortly before midnight on Thursday.

Although other locations were considered, including Lerner Hall, the decision to override the administration is in line with the band’s long-standing tradition.

“There is no other place that represents Columbia stress culture like Butler Library,” said Klotz. “[Orgo Night is] a disruption and a reminder that life is not about studying for every single minute of every single day. It’s important that we take that message to the place where that is most relevant.”