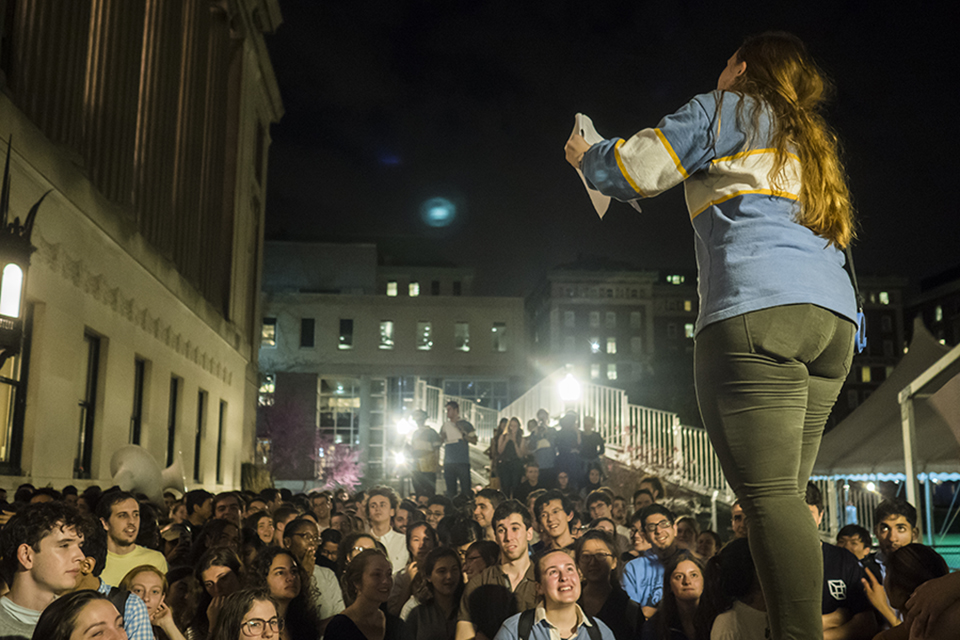 Following unanticipated warnings of individual disciplinary action from administrators, the Columbia University Marching Band held its semiannual Orgo Night performance in front of, rather than inside, Butler Library on Thursday evening.

On Wednesday night, the marching band had stated that it would proceed to hold the event in room 209 despite warnings of sanctions from administrators. But after the announcement was made, the band received emails Thursday afternoon from Dean of Undergraduate Student Life Cristen Kromm and Dean of Barnard College Avis Hinkson saying that individual members of the band would face punishment under the Dean’s Discipline for violating the Rules of Conduct if they held Orgo Night inside Butler.

According to head manager Vivian Klotz, BC ’20, the emails received on Thursday marked the first time the band was informed that individuals would face disciplinary action, rather than just board members or the band as a whole, despite multiple meetings with administrators in the past two months to discuss the future of the event.

Although the band was originally willing to ignore the administration’s directive, which had been put in place in December 2016 and stated that making noise that disrupts student activities is in violation of the Rules of Conduct, it made a collective decision to relocate when individual members were threatened with sanctions.

Individual sanctions could pose a financial burden for members who receive financial aid or negatively impact their graduate school prospects. Members also worried that disciplinary action would bar individuals from leadership positions in other organizations and initiatives on campus such as Sexual Violence Response and the New Student Orientation Program.

“The scariest part was the possibility of losing financial aid. … While [Orgo Night] is important to us, we don’t want to force anyone to make a decision between themselves and Orgo Night. … It sucks to be put into this position,” Julia Arredondo, BC ’19, said.

Though several Public Safety officers remained stationed outside room 209 and in the main lobby of Butler Thursday night, the band never attempted to enter the library. Hundreds of students poured into the main walkway outside of Butler to watch the performance, while band members gathered in the middle or climbed onto the raised ledges outside of Butler.

During the comedy routine, band members hit on several notable campus events from the past semester, including the graduate student strike, the student-led campaign to push Barnard to divest from companies with ties to Israel, and the demands of MFA Visual Arts students for a tuition refund. They also touched on recent national issues, such as student activism for gun reform following the Parkland shooting.

As the band also plays at many football and basketball games throughout the year, including at traditional events such as Homecoming or Senior Night, members expressed frustration at the University’s treatment of the band when it is not performing at school-sponsored events.

“They can still use us for the things they like us to be at, but can hold this one thing over our head,” Arredondo said. “Orgo Night is one of the most important things we do, they don’t seem to understand why it’s so important for us to have it in 209.”

Samantha Rowan, BC ’96, president of the Columbia University Band Alumni Association, and former Spectator news editor, said that CUMB alumni have also sent hundreds of emails to the administration regarding both the December 2016 directive and the most recent threats of disciplinary action, many of which received no response.

Rowan recalled having more constructive interactions with the administration when she was in the band and found this unresponsiveness to be indicative of how the University’s values have evolved.

“Columbia has changed a lot in the 20 years since I’ve graduated. It’s become more like a corporation than a university in a lot of ways, and I feel like the band’s role—in terms of Columbia’s history and traditions—isn’t appreciated because it’s not part of a broader vision of what Columbia is now,” she said.

According to Vice Provost Ann Thornton, the administration remains open to having conversations with band leadership to discuss future planning of the event.

However, some still feel that negotiations with the administration would compromise the purpose of the tradition.

“Part of Orgo Night is that it’s not sanctioned by the University. It started as a way to create disruption, a tool to call out the hypocrisy of what’s going on on campus. By allowing the university to determine where and how we do it, it isn’t that anymore,” band member Lindsey Rubin, GS/JTS ’19, said.