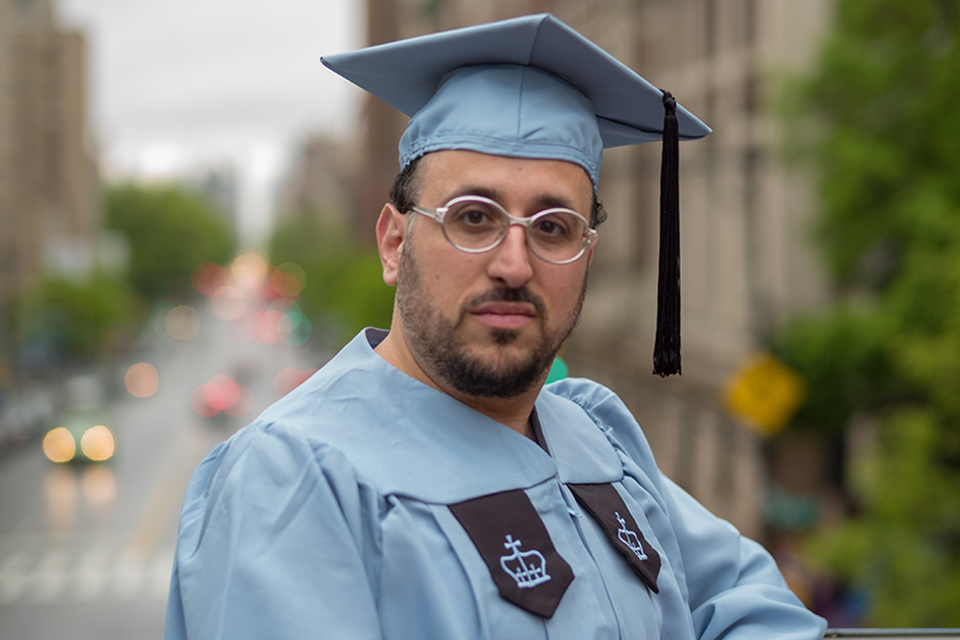 After graduating, Schmeltzer will be returning to Columbia in the fall to pursue a masters in Jewish studies.

Schmeltzer, who will graduate this year from the School of General Studies with a double major in creative writing and visual art, had already achieved widespread fame in his Hasidic Jewish community and currently boasts 22 solo albums to his name.

“I come from a very radical Hasidic upbringing,” Schmeltzer explained. “Women walked on different sides of the road; I had an arranged marriage.”

The Jewish entertainer developed a passion for music and art during his lonely childhood. The second- youngest of 12 children and the son of a Holocaust survivor, Schmeltzer said that his art helped him to cope with his surroundings.

At the age of 20, Schmeltzer was married and soon after had his first child not much later.

“I needed to feed my family, so I became a delivery boy,” Schmeltzer said. “They had no tape recorder in the truck, so I started listening to secular music.”

Coming from a highly religious background, Schmeltzer had never been exposed to contemporary music. The difference in content and style shocked him at first, but soon he came to develop his own music that fused the music he listened to all day with that of his childhood.

“I have one foot in the secular world and one in the Jewish community,” he said.

He quickly rose to stardom in the Hasidic music world, being dubbed the “Jewish Elvis” and the “Lady Gaga of Hasidic music” by media outlets.

However, his quirky style and modern subject matter attracted a range of responses.

“I started to have a lot of controversy in the Jewish community, because my music was bringing in different messages. Before I came around, most people just wrote songs about Hebrew prayer books, and I came and opened it up,” he said. “In one area I received a lot of controversy; in another area I was really loved.”

Schmeltzer was featured in the New York Times in March 2008 for the controversy his music sparked. In February 2008, he was due to give a concert under the billing of “Big Event” at Madison Square Garden. Hamodia, a Hebrew-language Israeli paper, published an article warning its readers against attending the show. As a result, Schmeltzer was forced to cancel the concert and a later one in London.

Since that event, however, Schmeltzer has performed for Mayor Michael Bloomberg at his annual Hanukkah party at the Museum of Jewish Heritage. In December 2015, he sang for Michelle and Barack Obama at the annual White House Hanukkah Party.

When Schmeltzer arrived at Columbia, he experienced a dramatic learning curve entirely separate from the academic aspect of his studies. His background meant he had little understanding of how to operate in a coed environment, didn’t know the normal conventions for writing an email, and frequently came upon communication difficulties given that English is not his first language.

“My professor had to tell me it’d be good to add ‘Dear Professor’ and a comma at the beginning of my emails, and maybe a ‘thank you’ and my name at the end,” Schmeltzer said, laughing.

After graduating, Schmeltzer will be returning to Columbia in the fall to pursue a masters in Jewish studies, and he hopes to go on tour this coming year and continue making art alongside his studies, which may include Jewish art.

“I think I have something to show, not only in the Jewish Community,” he said. “I do art to bring modern art into the Orthodox Jewish community, to bring people together, to bring peace to the world.”