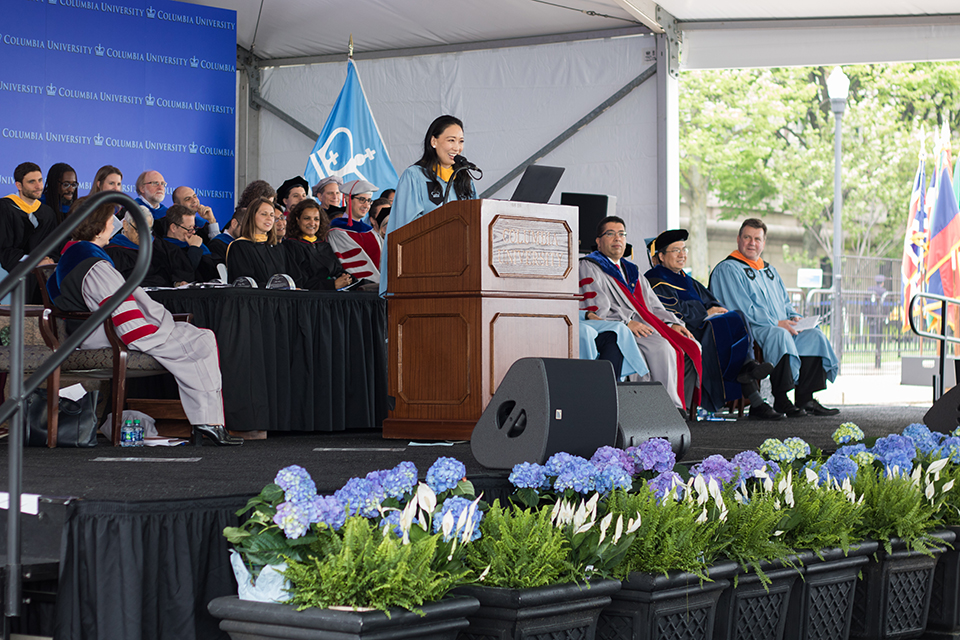 “Who goes to an Ivy League school—how much does this school cost now?—and then goes to peel potatoes?” Joo said.

Judy Joo, SEAS ’97, gave an inspiring call to action to the graduating class, encouraging them to follow their passions despite the risks, at the School of Engineering and Applied Science‘s Class Day.

Joo graduated from SEAS with a degree in industrial engineering and operations research. She then went on to work in finance at Goldman Sachs and Morgan Stanley. However, she left her lucrative job to follow her passion and start a career in the culinary arts.

When Joo first took this leap, she was not sure of herself or her ability. She just knew that she no longer wanted to work in banking, though she feared that she would not succeed in the kitchen.

Joo recalled her parents’ reaction when she switched careers; she remembered her parents’ dismay and worry with her decision. As the daughter of two immigrants, she also felt pressure to succeed as her parents had sacrificed so much to come to the United States and give her a privileged life.

“Who goes to an Ivy League school—how much does this school cost now?—and then goes to peel potatoes?” Joo said.

However, she turned her fear into courage and was able to succeed. Joo enrolled in the French Culinary Institute, where she graduated top of her class, and now owns two restaurants and hosts several shows on the Food Network. She is currently one of two female Iron Chefs.

“Parents, if your grown children choose an uncommon path, please give them your blessing and know that they are more prepared than you think,” Joo said.

She also encouraged students to embrace their own future and make things happen, rather than wait for things to fall into place.

“I’ve gone through three male-dominated arenas: engineering, finance and restaurant[ing],” she said. “I’ve succeeded by embracing the discomfort of living outside the comfort zone.”

Dean of the School of Engineering and Applied Science Mary Boyce said that now, more than ever, engineering will be important to shaping the future of society.

“You are graduating at a time of rapid change at every section of our lives,” she said. “When engineering has never been more important to society and to addressing the pressing challenges we face.”