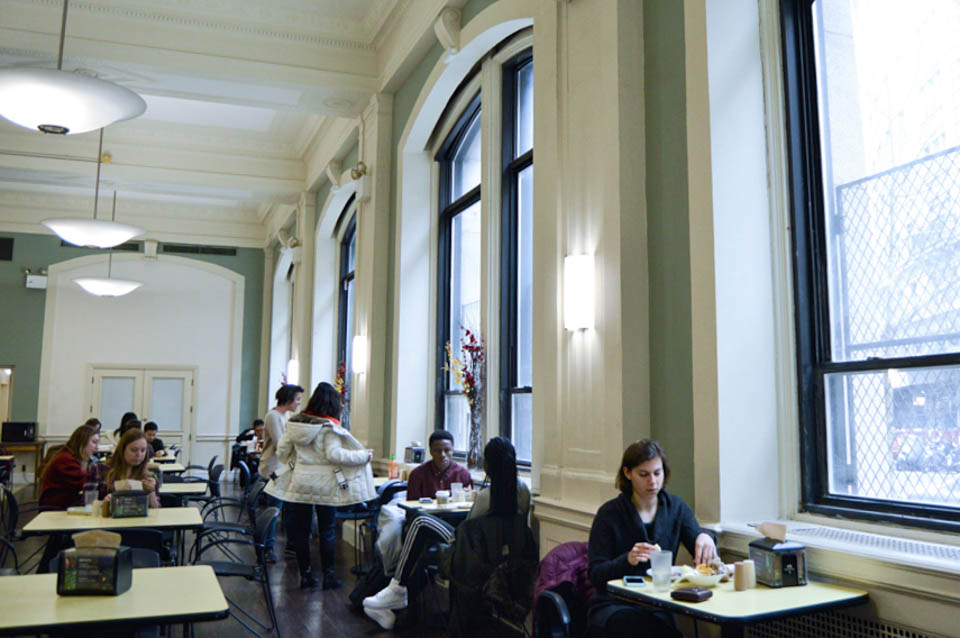 Many students also stated that they would have reconsidered their housing decision if they had known about the new meal plan prices beforehand.

After over 700 students signed a petition protesting recent changes in Barnard’s meal plan pricing structure, Barnard has added new, more affordable meal plans. While these new options are cheaper than those made available after Barnard’s original restructure earlier this week, they are still pricier than the most affordable options offered last year.

In addition to a 4.5 percent tuition hike, Barnard increased the price of meal plans and reduced the number of available options for upperclass students living outside the quad from 10 to five. Students were not directly notified of these changes, which were released on the college’s website two months after many students agreed to pay for certain dining plans via their housing contracts. Barnard students are not able to fully opt out of meal plans.

Last year, these students had the option to choose from meal plans that cost between $662 and $6,590 a year. But as of Tuesday, students living outside the Quad for the 2018-2019 school year were required to enroll in plans that cost at least $2,150 a year.

However, after hundreds of students signed a petition decrying the meal plan options as unaffordable, especially for low-income students, Vice President for Campus Services Gail Beltrone sent an email to students on Tuesday evening announcing that all students not living in the Quad could choose the Convenience Commuter 400 Points Only Plan whether they plan to commute or not. Accordingly, the name of the plan has changed to the “Convenience 400 Points Only Plan.”

The petition, created by Arianna Scotti, BC ’20, calls for Barnard to bring back the cheaper meal plan options offered in previous years, adequately address food insecurity on campus, and commit to “improving food quality and health conditions at its dining halls.” Scotti said she only realized prices went up when she saw a Facebook post by a fellow student.

In a follow-up email sent on Wednesday, Beltrone also announced that, in response to students who “asked for a meal plan option that contains a smaller combination of meals and swipes,” the college has now reintroduced the Flex 30 plan—30 meals per semester plus 150 points at a cost of $994 a year—as an additional option available to those living outside the Quad. 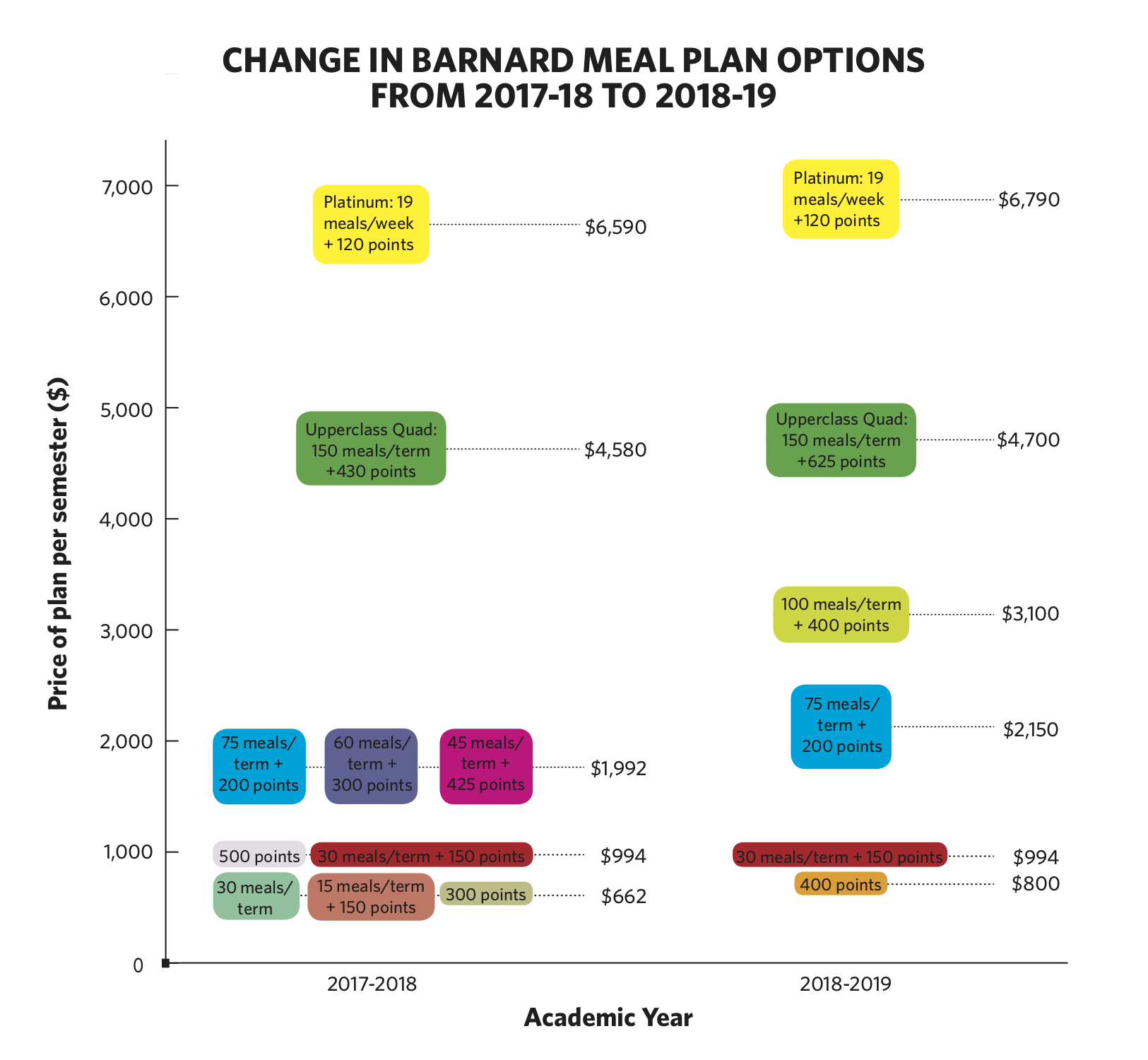 “The more choice, the better,” said Veronica Suchodolski, BC ’19, who identifies as a low-income student. “I really don’t understand why they got rid of the smaller meal plan options at all, because there’s just simply not a one-size-fits-all solution for this problem, so I don’t really know why they are trying to come up with one.”

In addition, students argued that the Convenience 400 Points-Only Plan is too limiting, as points can only be used on Barnard’s campus.

“It’s not going to be more economical for students in any way, shape, or form, because you’re just subjected to eating in one specific location instead of being able to go elsewhere,” said Ornella Pedrozo, BC ’21, who also identifies as a low-income student. “Eliminating cheaper options in general is eliminating people from making a complete choice because, really, you’re just subjected to what’s being offered.”

Beltrone’s Wednesday email also stated that upperclass students residing in the Quad will, as in previous years, still be required to enroll in the Upper Class Quad Plan, though it now includes more points and fewer meal swipes at a cost of $4,700 per year, up $120 from last year’s $4,580.

Many students—particularly those living in the Quad—also stated that they would have reconsidered their housing decision if they had known about the new pricing structure beforehand.

Beltrone added that upperclass students living in Barnard housing outside of the Quad will be automatically enrolled in the Flex 100 plan, which costs $3,100 per year, but may opt into a different meal plan of their choice. The Flex 100 plan, according to Beltrone, is meant to address student concerns over food insecurity, as it ensures that students have access to at least one meal per day.

However, this plan is still the third most expensive option out of six.

“It’s annoying for the administration to be sort of looking for a pat on the back for being like, ‘Oh look, you get one a meal day,’ which is not enough to live off of,” Suchodolski said. “I don’t know how they came to the conclusion that one meal a day would beat food insecurity.”

Beltrone reiterated that students will now be able to use as many guest swipes as they have meal swipes remaining in their balance, a decision that, in his email to the college earlier this month, Chief Operating Officer Rob Goldberg said was meant to help address the issue of food insecurity on campus. Beltrone added that students will now be able to add meals throughout the year in increments of 5 and 10 and points in increments of 25.

However, concerns raised in the petition also include issues with the food options and dining halls themselves. The petition asserts that “Barnard has also shown a total lack of commitment to improving food quality and health conditions at its dining halls” and that the “increase in [meal plan prices] does not reflect an increase in quality of food and health standards at Barnard.”

“When Barnard advertises itself as a school that meets full need, one would assume that that includes food,” Suchodolski said. “Myself and other low-income students I’ve spoken to are really grateful that we’re able to go to this school, but there is a certain sentiment that once we arrive on campus, it’s like, ‘Well, you’re here, so that should be enough.’”