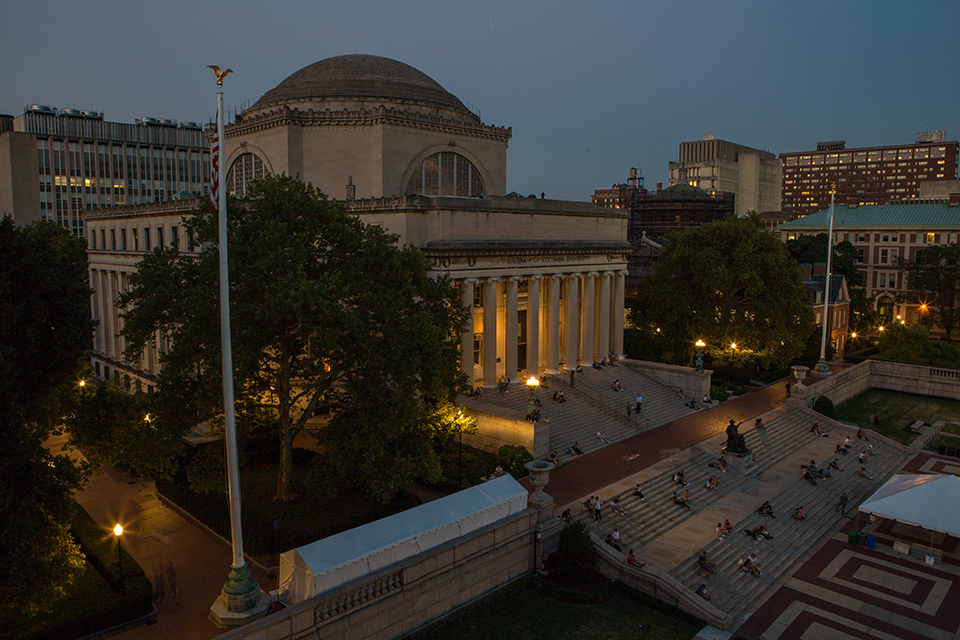 If implemented, the policies could reduce victims’ legal ground for filing a complaint against Columbia, which currently faces the second highest number of Title IX investigations in the Ivy League.

Newly proposed federal Title IX regulations could spark broad changes to Columbia policies governing sexual misconduct, bolstering the rights of the accused and making it difficult to bring a legal complaint against Columbia for its handling of investigations, according to legal experts.

If implemented, the policies could reduce victims’ legal ground for filing a complaint against Columbia, which currently faces the second highest number of Title IX investigations in the Ivy League. Consequently, anti-sexual assault activists worry that the new rules will make it more difficult to hold the University accountable through litigation.

U.S. Secretary of Education Betsy DeVos’ proposed policies, obtained and released in a New York Times report, delineate a higher threshold for what constitutes sexual harassment. They also hold schools accountable for formal complaints only if they are made to officials directly responsible for enforcing rules—meaning most advisers and student life employees, like residential advisers, would not be legally mandated reporters.

While the regulations do not mandate that universities change their policies, schools that do not will face more legal pushback from anyone accused of harassment, creating a deterrent for universities that don’t comply, according to Title IX expert Saundra Schuster. 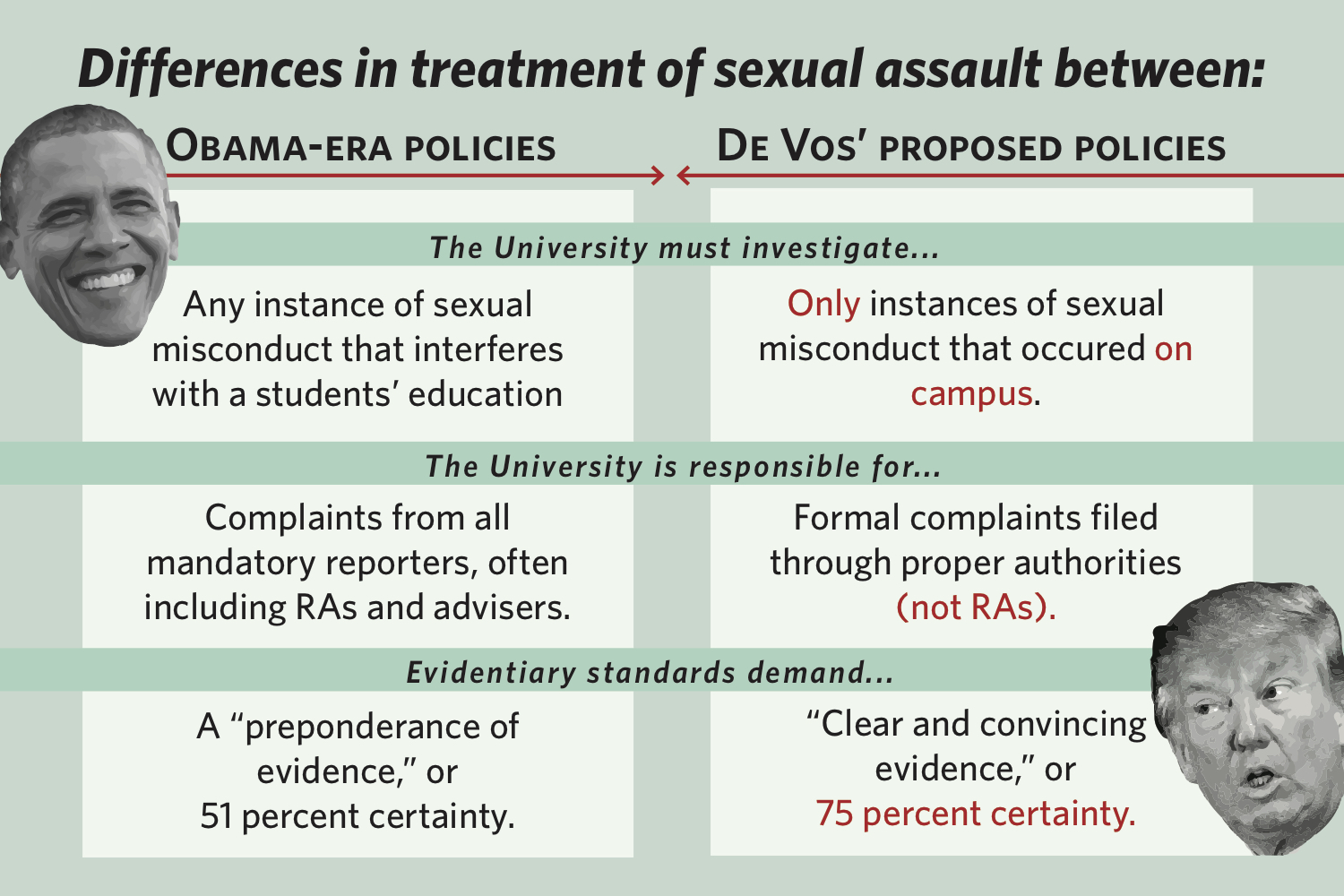 In a statement to Spectator, Executive Vice President for University Life Suzanne Goldberg said that Columbia will review the proposed rules carefully when they are formally released, but encouraged all students to learn more about Columbia’s gender-based misconduct policy.

Columbia’s current sexual misconduct policies were first established during the Obama era, marking an effort to make Title IX resources more accessible. They use the “preponderance of the evidence” as a standard to find students responsible for misconduct, but the new DOE rules would allow schools to use a “clear and convincing” standard, which would more seriously protect students accused of misconduct.

If implemented, the new rules would also relieve universities like Columbia—which currently faces five federal investigations for its handling of sexual misconduct investigations—of the responsibility of investigating occurrences in any off-campus housing.

Three of Columbia’s fraternities—Alpha Delta Phi, Beta Theta Pi, and St. Anthony Hall—are not considered on-campus housing, and five percent of undergraduate students live off campus, meaning that the University could not be held liable for sexual misconduct in these locations (fraternities pose a unique risk for sexual misconduct, a Columbia study last year showed). Additionally, the policies would waive liability in instances that occur at events off campus, such as Columbia Outdoor Orientation Program and retreats for clubs.

For the first time, the Trump administration has also explicitly said that a university’s treatment of the accused can constitute sex discrimination, according to the leaked policies. A 2017 lawsuit filed by Paul Nungesser against Columbia University, which ultimately resulted in a settlement, set a precedent for cases involving discrimination against the accused. Nungesser’s suit claimed that the University failed to protect him from—and even encouraged—sustained protest by Emma Sulkowicz, CC ’15, who accused him of assault in 2012.

According to Title IX expert Peter Lake, a law professor at Stetson University, Devos’ 2017 withdrawal of the “Dear Colleague” letter on sexual harassment has sparked a national increase in lawsuits from the accused who have even cited the leaked policies as grounds for litigation.

These lawsuits may influence universities to adjust their policies to be more in line with those by the Trump administration, according to Colby Bruno, senior legal counsel of the Victims Rights Law Center.

“I think that schools have come really far in educating themselves … If these rules go into place, those schools are going to be between a rock and a hard place, with the federal government breathing down their necks, saying they have to change things … [They’ll] see a lot of their hard work go out the door,” Bruno said.

The new policies also only require universities to respond to formal complaints filed with “an official who has the authority to institute corrective measures,” meaning that students may not be granted accommodations unless they report to a high-level administrator, according to Schuster. These policies, Schuster said, could even deter students from requesting medical help.

Amelia Roskin-Frazee, who filed a Title IX lawsuit against Columbia in March 2017, believes that the new rules will make it even harder for victims to come forward. Her lawsuit claimed the University “created a culture of sexual hostility on campus and acted with deliberate indifference” in response to her allegations of two incidents of rape her first year, but the case was dismissed by a federal judge.

“The administration is prioritizing protecting perpetrators over survivors,” she said. “It’s scary to think of being less regulated than we were.”

Meridith Wade, CC ’19 and a former intern in Columbia’s Title IX office, said she believes changes to the definition of an official complaint—which would exclude residential advisers as mandatory reporters—could exacerbate a chilling effect on reporting.

“I just am worried, because there’s already a hesitation for people to come forward. I’ve experienced backlash from leaders of organizations who do not want to be mandatory reporters … I would beg anyone even if you are not a mandatory reporter to make a report no matter what. That person’s safety is always more important.”

Former RA Amber Officer-Narvasa, CC ’18, said the proposal to remove the 60-day time limit to complete an investigation will make it even harder for survivors to trust the administration in handling their cases.

“Knowing how much colleges already try to escape responsibility that occurs on their campuses—these changes will make it even easier; they will let investigations drag on for years and years,” she said. “Survivors will not really be able to appeal the decision of a case.”