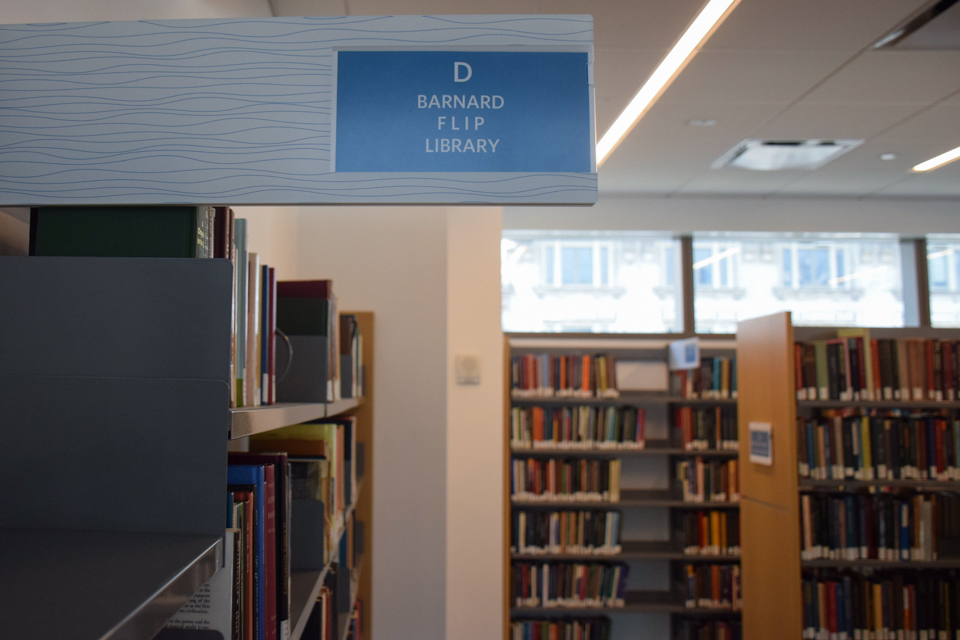 The library, an extension of the lending library in Butler Library, currently holds close to 500 textbooks available to either be checked out for two hours or rented for an entire semester.

Students in the First-Generation Low-Income Partnership have teamed up with Barnard librarians to create a lending library for first-generation low-income students at the recently opened Milstein Center for Teaching and Learning.

The library, an extension of the lending library in Butler Library, currently holds close to 500 textbooks available to either be checked out for two hours or rented for an entire semester, and FLIP plans to continue to add more textbooks over the course of the semester. Students who identify as first-generation or low-income must fill out a Google form to obtain access to the books.

“The goal is to have books for all schools in both libraries,” FLIP co-president Destiny Machin, SEAS ’19, said. “We're just making sure we can get as many course texts and that each student who needs books has what they need.”

For Machin, who identifies as first-generation low-income, this initiative was deeply personal because of her past experiences purchasing textbooks.

“If you don't have a course text, how are you going [to] succeed?” Machin said. “Looking back at this sophomore and junior year especially, I struggled with finances a lot. Trying to do the work-study balance was so hard sometimes that I wouldn't have enough to eat… If I had spent $500 on books this semester, it wouldn't have been possible.”

“They made this project so easy because they did so much of the hard work of getting the information of the spaces we could get here, where we could get books, [and creating the system] that grants FGLI students priority for the books,” former Student Government Association Representative for Inclusion and Equity Kashaf Doha, BC ’19, said.

SGA Vice President for Communications Kim Samala, BC ’20, hopes that more departments and administrators at Barnard will emulate the librarians and their support of FLIP and first-generation low-income students.

“We overlook librarians just like we overlook FGLI students,” Samala said. “It was really two different kinds of communities coming together and helping each other. ... It was amazing to see a part of administration support their students in any way possible.”

And while FLIP members did receive support from the librarians, the project was predominantly led by first-generation low-income students, which, as Samala pointed out, required sacrificing time that could have been spent working or making money.

“As FGLI students, when we advocate for ourselves, it’s really hard because we also have to do other things our livelihood depends on. Each and every student that worked on the FLIP library sacrificed a lot of their time,” she said.

According to Machin, one improvement Barnard’s lending library will have over Columbia’s is certification that students who are borrowing the textbooks self-identify as first-generation low-income. At Columbia, the lending library runs on an honor system where anyone can access the books. Machin says the next step is to bring this system over to Butler.

In a statement, Kristen Hogan, a Barnard Library administrator, and her team said they are hoping to gather and analyze student feedback as they continue adding more course materials. She will also continue to work closely with FLIP members to determine how to allocate the funds devoted to the project.

FLIP is spearheading multiple projects to improve the experience of first-generation low-income students at Columbia and Barnard, including the Share Meals app, which allows students of all four undergraduate schools to coordinate and swipe each other into dining halls.

During this upcoming semester, FLIP will begin hosting financial aid literacy workshops as well as piloting a host family program, by which incoming GS students can be paired with returning housing-secure students so they do not have to fear being homeless while they look for housing.