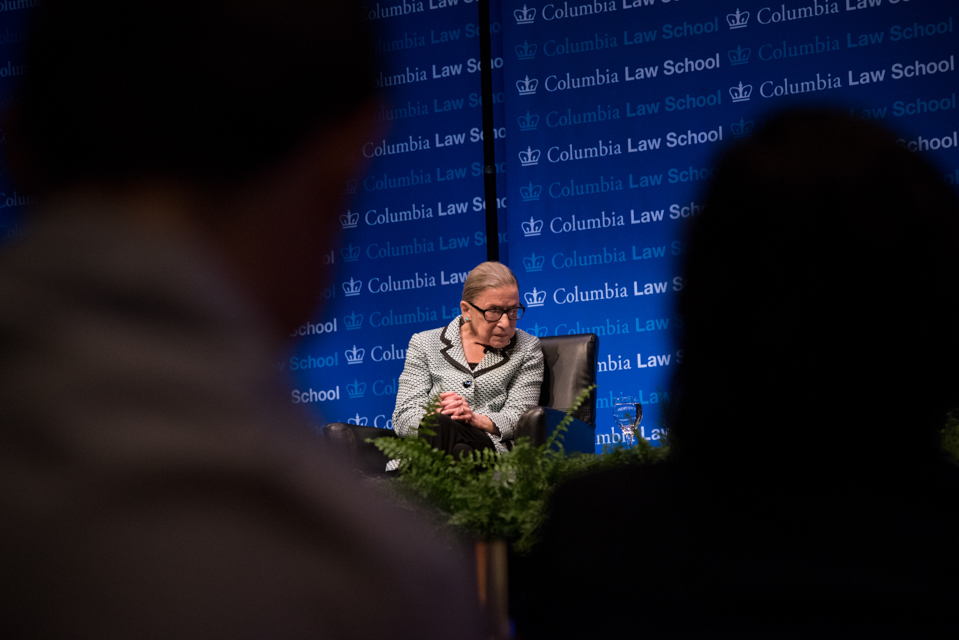 Supreme Court Justice Ruth Bader Ginsburg, Law '59, highlighted the difficulties she has faced as a woman in a male-dominated field.

The event, hosted by the Law School in honor of the twenty-fifth anniversary of Ginsburg’s appointment to the Supreme Court, was attended by over 1,000 people.

The panelists spoke about changes to the legal field in recent decades from the push for gender equality to the impact of social media.

Ginsburg, who graduated from the Law School as one of just 12 women in her class, reflected on her time at Columbia, highlighting the difficulties she has faced as a woman in a male-dominated field.

“When I was in law school, there was never a woman in the classroom,” she said. “[One professor] ignored the women for the entire semester except one day—‘Ladies’ Day’— announced in advance. The women were all sitting in the first row and they were called on, incessantly.”

Ginsburg said that gender equality in the classroom has progressed significantly since her days in Law School.

“Some people are impatient because we haven’t reached nirvana,” Ginsburg said. “But the general change is just enormous.”

Metzger joked that Ginsburg has become a movie star since the release of the documentary “RBG,” which portrays her as a resilient trailblazer in her early legal battles for women’s rights.

Despite this portrayal, Ginsburg revealed that she was once too intimidated to speak in her lecture hall. In response to a student’s question about the first time she spoke in class, Ginsburg said she set a challenge for herself to answer questions as often as her male peers.

The panelists advised aspiring lawyers to approach their work as a means of helping people, rather than simply seeking to make a name for themselves. Gelernt warned students to resist the pressure created by social media to only take cases that go viral.

“Students, if you take one case–it doesn’t have to be an impact case–one case, helping one person, and then if you help that person, it’s an enormous accomplishment,” said Gelernt. “[Don’t] get caught up in the media blitz around cases.”

“If you are a true professional, you will use your degree to help make things a little better for other people,” Ginsburg said. “You [will] get a satisfaction you will never get turning over a buck.”