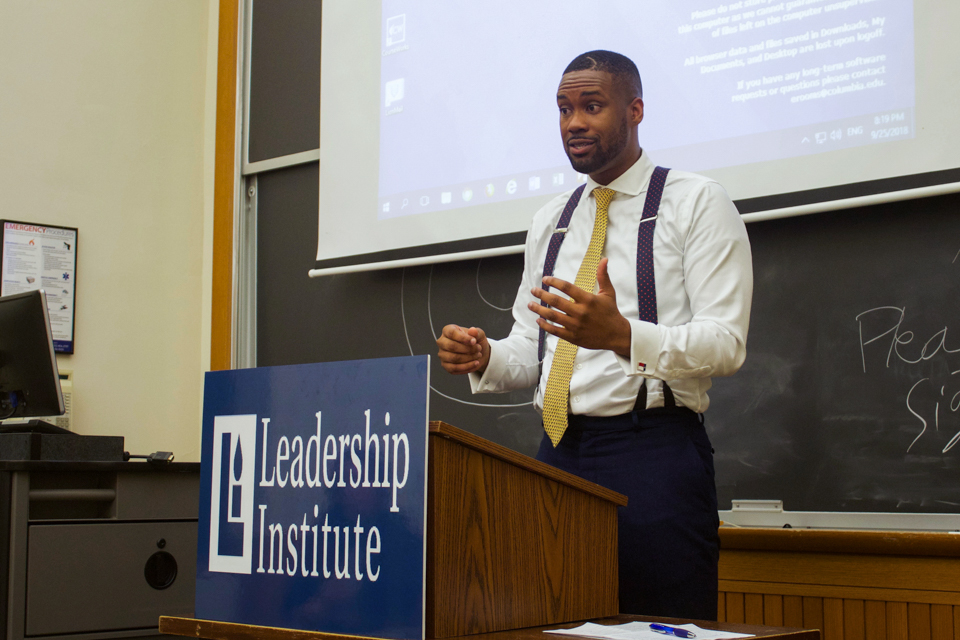 Jones emphasized the importance of diversity outreach within the Republican Party.

Conservative radio host and author Lawrence B. Jones emphasized the importance of diversity outreach within the Republican Party at the Columbia University College Republicans’ first event of the year on Tuesday.

Jones’ speech, which was attended by a predominantly white audience of about 35 people, marked a sharp contrast to last year’s CUCR speaker series, which featured alt-right figures and white nationalists including Mike Cernovich and Tommy Robinson, both of who presented arguments against diversity as envisioned by liberals.

Jones is the editor-in-chief of conservative news site Campus Reform, whose mission is to report on incidents of ostensible liberal bias on college campuses. Jones, who campaigned for Obama, said he turned to the Republican Party after feeling that the Democratic Party had not delivered on its promises to black voters.

Jones argued that the progressive movement has failed to deliver on diversity policies meant to help minority communities, explicitly referencing the unaddressed needs of those within the black community.

He said that despite the actions of the Democratic Party, Republicans should also be doing more to reach out to black communities, specifically calling on conservative students to appeal to black voters.

“Where are you during the election time?” he said to conservative students in room. “What are you doing when there’s tragedy happening in the community… Are you there asking for their vote? Are you asking what’s happening in their communities?”

Jones said that this kind of outreach will determine the Republican Party’s future trajectory.

“The [Republican] future is dependent on what the GOP is willing to accept,” he said. “Are you willing to go into communities that don’t look like you?”

“When it comes to the kids at the border, we all cry, we’re sad to see them stripped from their family,” Jones said. “But no one said anything about the war on drugs when it affected the black community. No one talked about [the government] ripping their families away, even though it was an initiative by the Clinton administration.”

One student asked Jones how to engage with students who were offended by a social media post she made defending Supreme Court nominee Brett Kavanaugh, who was accused of sexual assault by two women this week.

“I don’t know what to do with it,” she said. “How do I engage with someone who said I hurt their feelings?”

Jones said that today’s politically correct environment has made it difficult for people to engage with opinions that they do not agree with.

“The whole ‘hurt feelings movement’ has destroyed our generation,” he said.