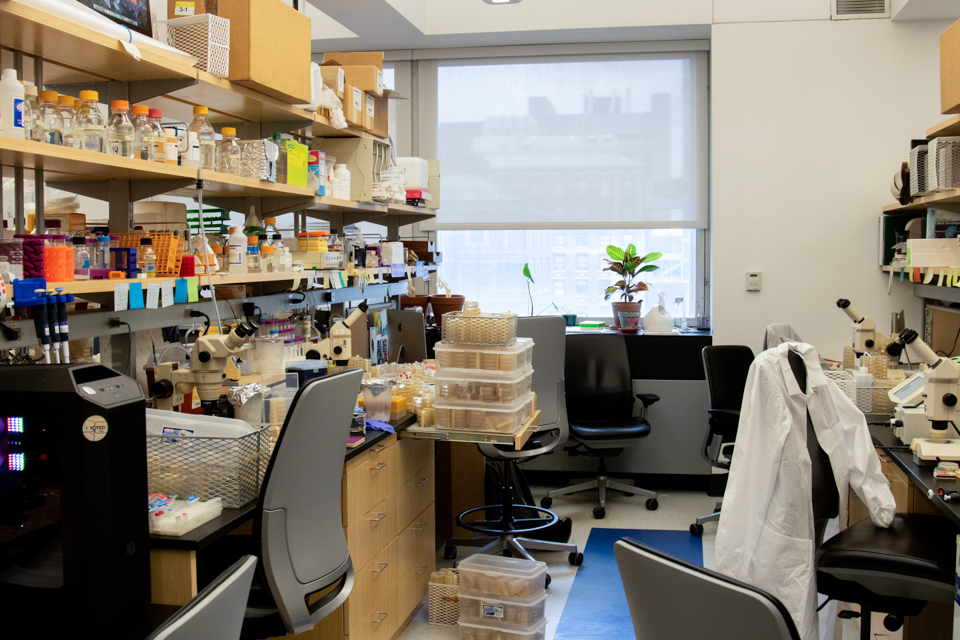 Teaching labs, which are used by every biology undergraduate, have not been renovated in four decades, according to professors who work and teach in them.

Dana Pe’er left her coveted position as a tenured biology professor at Columbia in 2016 after working for 10 years in the decrepit facilities of Fairchild.

“Students don’t have access to the kinds of modern labs that other universities have,” Pe’er said. “Personally, if someone interested in biology as an undergrad asked me if they should go study at Columbia, I would say absolutely not.”

Since Pe’er’s decision to leave, the University has dedicated significant funds to renovating Fairchild’s facilities, specifically focusing on labs for incoming faculty members who are promised sizeable start-up packages. However, over a dozen interviews with professors and students have shown that the University’s recent investments only respond to direct concerns with faculty recruitment, and have left one significant population behind: undergraduates in the biology department.

Teaching labs, which are used by every biology undergraduate, have not been renovated in four decades, according to professors who work and teach in them. Additionally, the labs of tenured faculty, which are impaired by many smaller but disruptive maintenance issues, have been neglected in order to prioritize incoming faculty labs.

Constructed in 1978, Fairchild is the home to the biological sciences department on the Morningside campus. Thirteen of the building’s 25 labs have been renovated in an effort to attract world-renowned faculty members. According to a University spokesperson, Campus Operations has completed more than 3,000 work orders at Fairchild since November 2016 and is currently overhauling the entire air handling units to improve air quality. 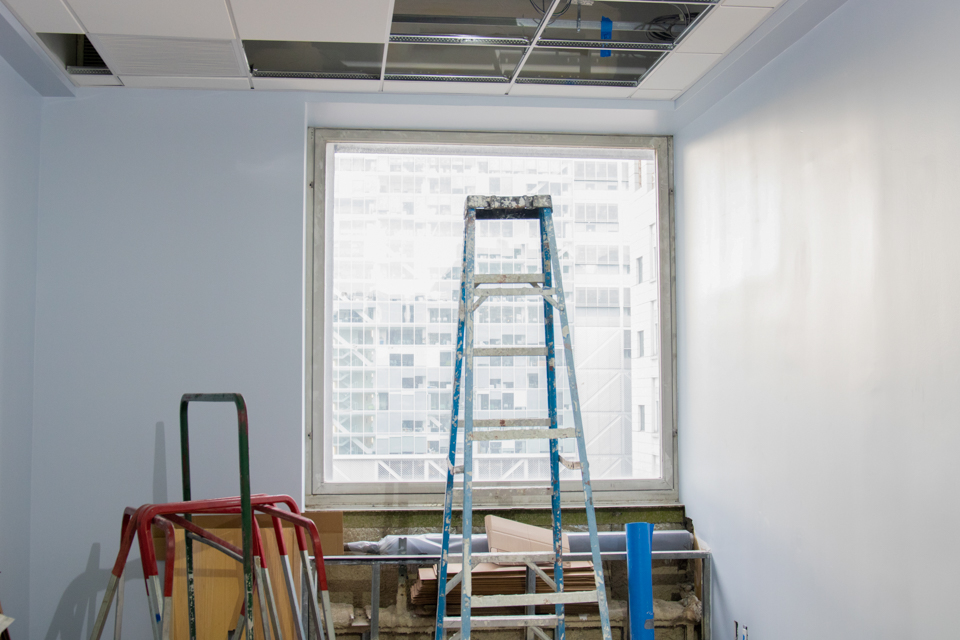 While Professor Marko Jovanovic's lab is under construction as part of his recruitment package, he is temporarily set up in the biology swing space. (Aliya Schneider / Columbia Daily Spectator) 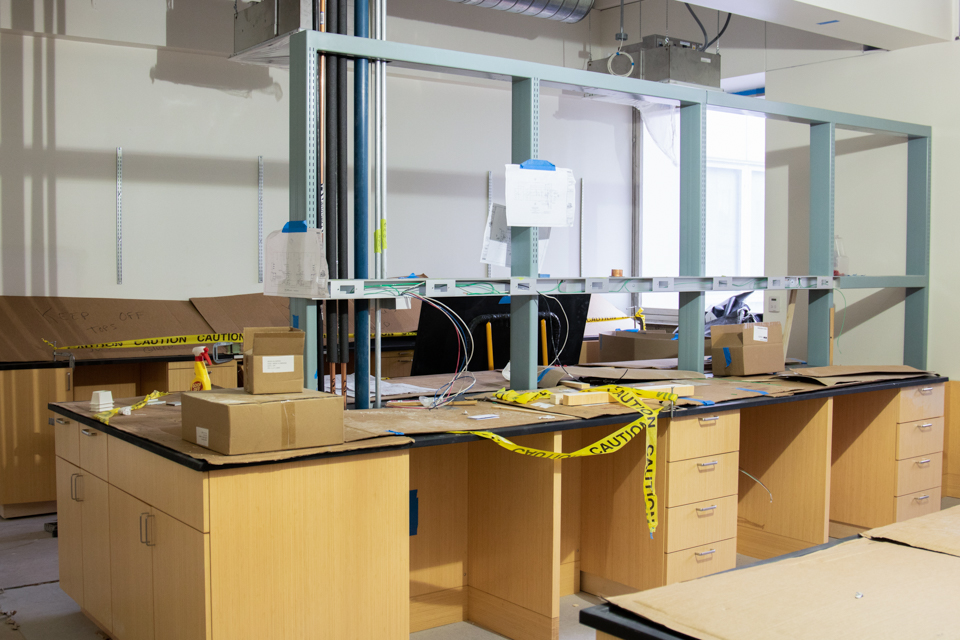 Renovations for new labs can require 18-24 months of planning and up to 6 months of construction for completion. (Aliya Schneider / Columbia Daily Spectator)

“Arts and Sciences has plans around fundraising for the sciences,” Executive Vice President for University Facilities and Operations David Greenberg said. “We are always happy to assist them on the planning and construction side and doing design for necessary projects.”

According to Peter de Menocal, dean of the natural sciences, his division lacks the funds necessary to prioritize improving research lab spaces for undergraduates. The natural sciences have faced consistent financial struggles, particularly after the 2011 Science Initiative, the first fundraising campaign dedicated specifically to the division, failed to raise significant funds in its initial stages. Now renamed Columbia Science Commits, the initiative is dedicated to raising funds for undergraduate education in research labs.

De Menocal cited the disconnect between the University’s main fundraising campaign, the Columbia Commitment, which focuses on such broad research initiatives as neuroscience and precision medicine and the need for increased attention to undergraduate resources.

“We’re fundraising for areas where the University has already invested money in new facilities, but that’s not enough,” de Menocal said. “[Columbia Science Commits’] primary goal is to focus on improving the undergraduate experience on the campus. … It would be incorrect to say we’re doing nothing about it, but it would also be incorrect to say that we’re even close to done.”

Biology professor Oliver Hobert, who is also on the Uris Vision Committee to decide plans for Uris Hall’s future space allocations, pointed to a general trend where complaints are only addressed to improve faculty retention rather than to enhance undergraduate education.

“It’s an oversight by the institution that I find incomprehensible, but when it comes to maintenance that is not triggered by some sort of crisis, the administration wants to spend their money elsewhere.”

Biology professor Lars Dietrich, who has taught in Fairchild’s teaching lab for seven years, said the spaces are in a state of significant disrepair: They suffer from frequent leaks, contaminated air, and decaying flameproof panels, which teaching assistants must manually glue down before each class. 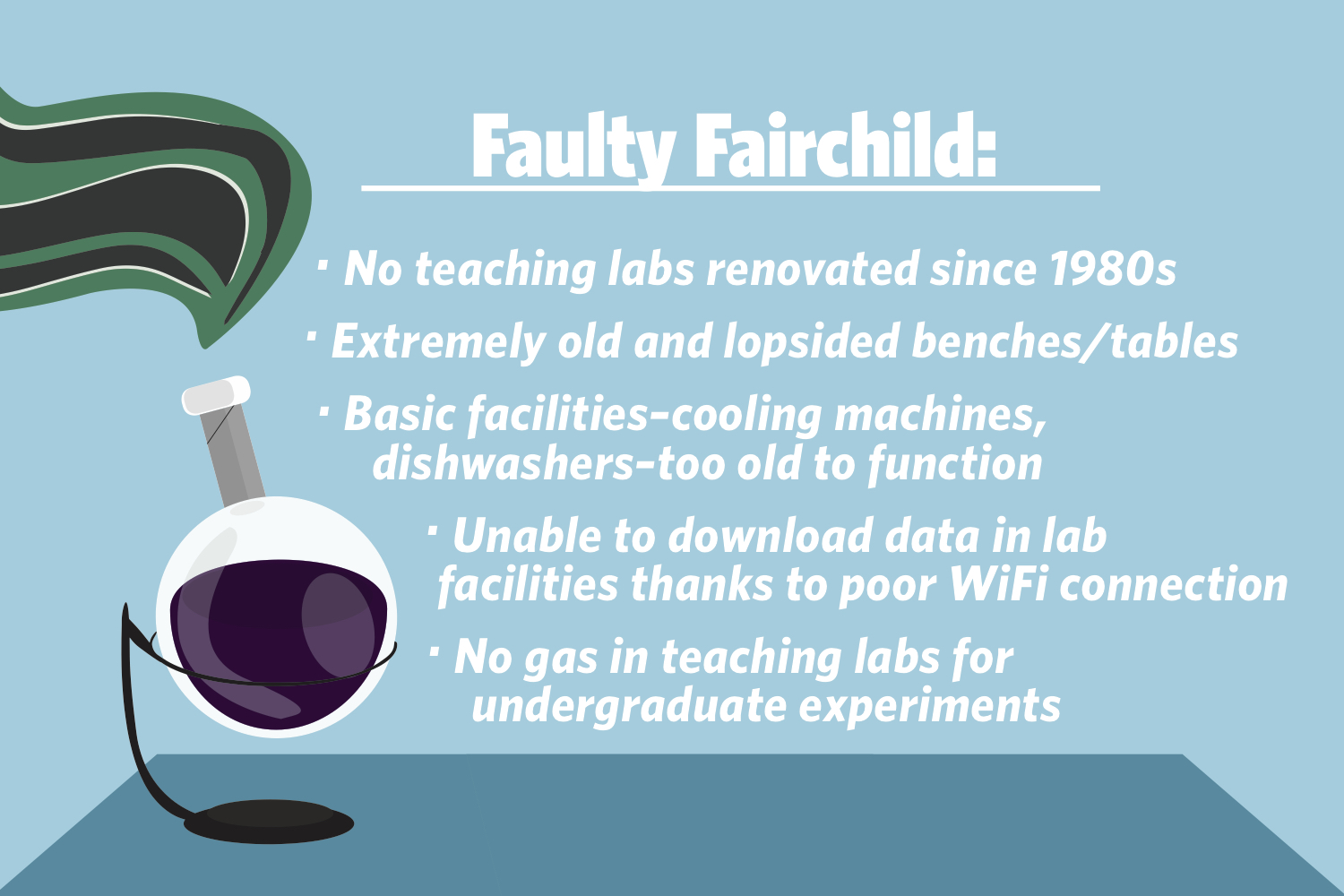 Most importantly, Fairchild’s teaching lab has not had access to a gas line for the past two years, which has prohibited the use of Bunsen burners, a key piece of equipment for general laboratory practices.

Dietrich said that at the end of each course he teaches, students consistently state their disappointment in the state of the facilities. 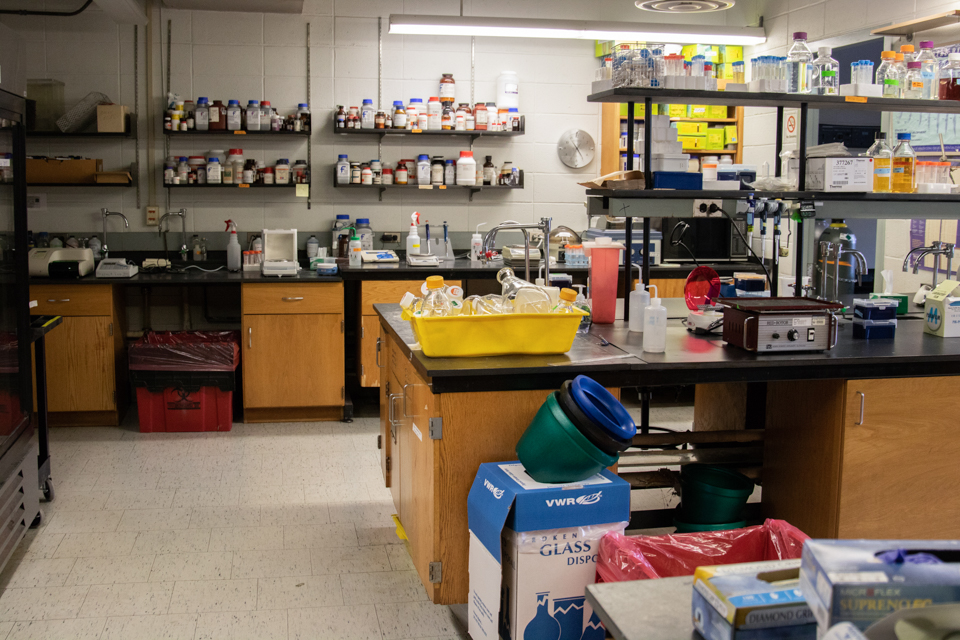 Located in room 743, the only teaching lab in Fairchild hasn't been renovated since the early 80s. (Aliya Schneider / Columbia Daily Spectator) 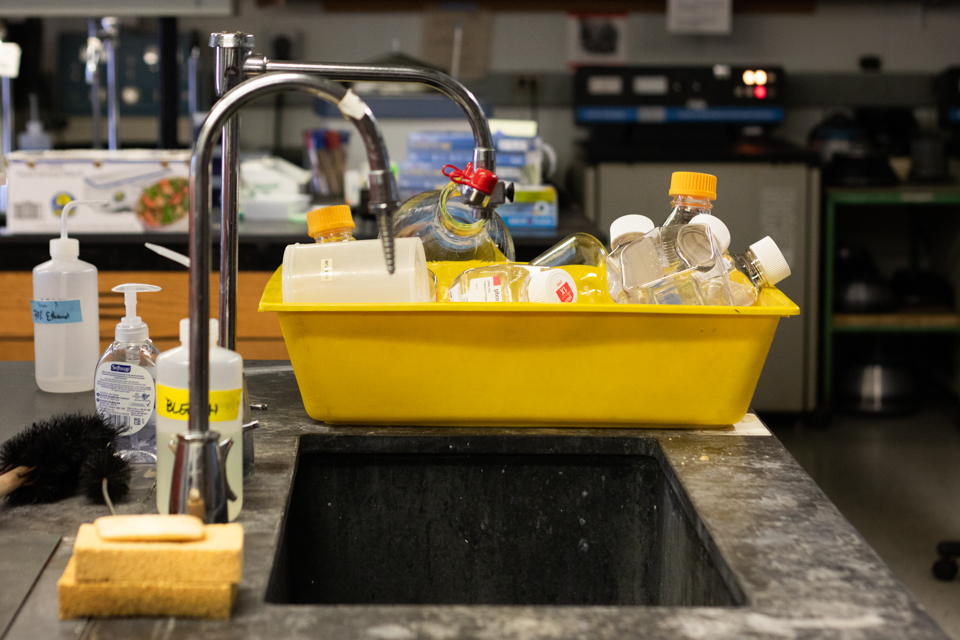 Multiple professors have complained about the lack of gas line, old equipment, and leakage in the teaching lab. (Aliya Schneider / Columbia Daily Spectator) 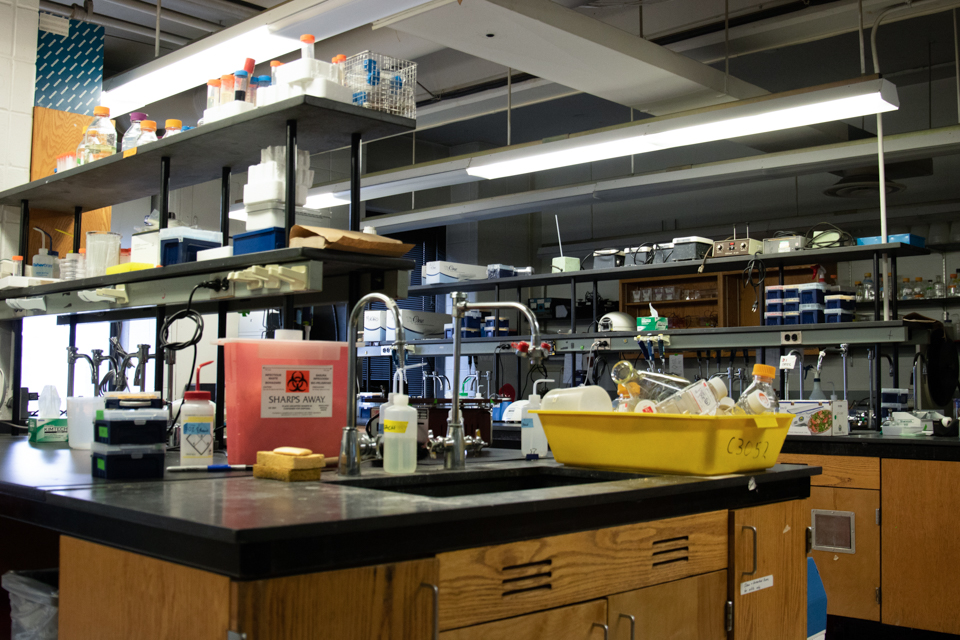 According to Ph.D. candidate Bryan Wang, who served as a teaching assistant for the Project Lab in Microbiology in spring 2018, many TAs have continually complained about the poor state of facilities, but nothing has changed.

“The space is embarrassing. For a school that so many people pay so much to attend, to have this lab be a primary lab space is unacceptable,” Wang said.

The lack of renovations of the labs of tenured professors is further detrimental, as these labs often house many undergraduates conducting research. Professor Songtao Jia, who has been at Columbia for 12 years, says that his lab has been plagued by major leaks—which have ruined lab work—poor insulation, and out-of-date lab equipment.

Jia said the state of Fairchild is an embarrassment to the University, and “a completely different world” compared to institutions significantly more affordable than Columbia, referencing City College, where tuition is $3,265 compared to Columbia’s $55,056, but still have state-of-the-art labs. Both Dietrich and Wang noted that at almost any other institution, whether private or public, teaching lab facilities are significantly better than those at Columbia.

“I’ve been to other places. During my training I was at different universities, and this is not the norm. We want to concentrate our efforts on research, not on worrying about small repairs,” Jia said.

Professor Martin Chalfie, who conducted his Nobel-prize-winning research at a Columbia lab, has not seen his lab renovated since Fairchild was originally built, a fact that every professor interviewed for this article referred to as “an embarrassment.”

“I have one of the oldest labs here, which is a little ironic, since my lab is one of the stops on the tour for prospective students,” Chalfie said.

Lena Kogan, BC ’19, has been working in the unrenovated Kalderon Lab in Fairchild since her sophomore year.

According to Kogan, the primary problems include outdated equipment and technology, specifically computers which are crucial to her lab’s research.

“I feel like I’m not able to be productive enough in the lab,” she said. “It makes me feel bad that I’m using the lab’s resources but we’re not able to get things done as fast as we should.”

According to Kogan, other labs that she has seen, specifically those at Barnard, are significantly cleaner, and not “forgotten” in the way Fairchild labs are.

“That’s what seems to be the most insulting part to me, that lab members care so much about their research and it doesn’t seem like the University cares as much about what happens,” Kogan said. 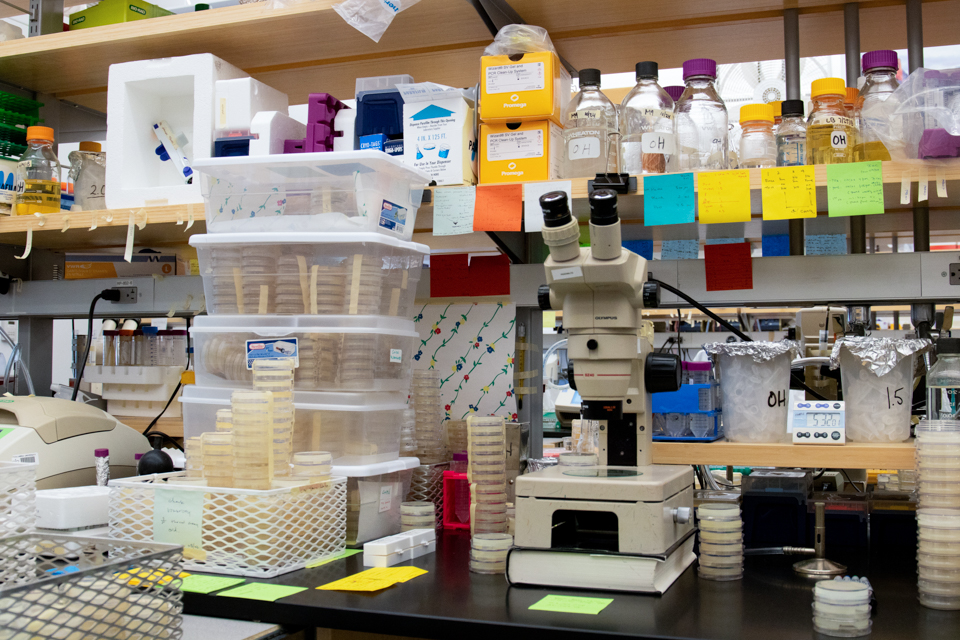 By contrast, Karolina Kaczmarczyk, CC ’21, has worked in the newly renovated Hobert lab since fall 2017. Kaczmarczyk stressed the importance of being able to work in an refurbished lab space, and how the quality of facilities directly affects the research experience.

“You feel like you are doing important research in a space that is new; you feel better than if you were in a 40 year old lab space without high-tech instruments,” she said.

In the new labs that have been renovated, faculty members and students have reported positive experiences. Hobert received a newly-renovated lab upon his transition from Columbia Medical Center to the undergraduate biology department in 2015, and highlighted his experience as a reason why Columbia must invest in all of Fairchild’s spaces, not just those of incoming faculty.

“I’m all for advertising the poor state of the Fairchild building. I view the good state of my lab as an obvious reminder of how good it could be made to be, but isn’t,” Hobert said.

Correction: An earlier version of this article incorrectly stated that $15 million had been dedicated to renovating Fairchild since 2016; the amount has been spent over the past six years.