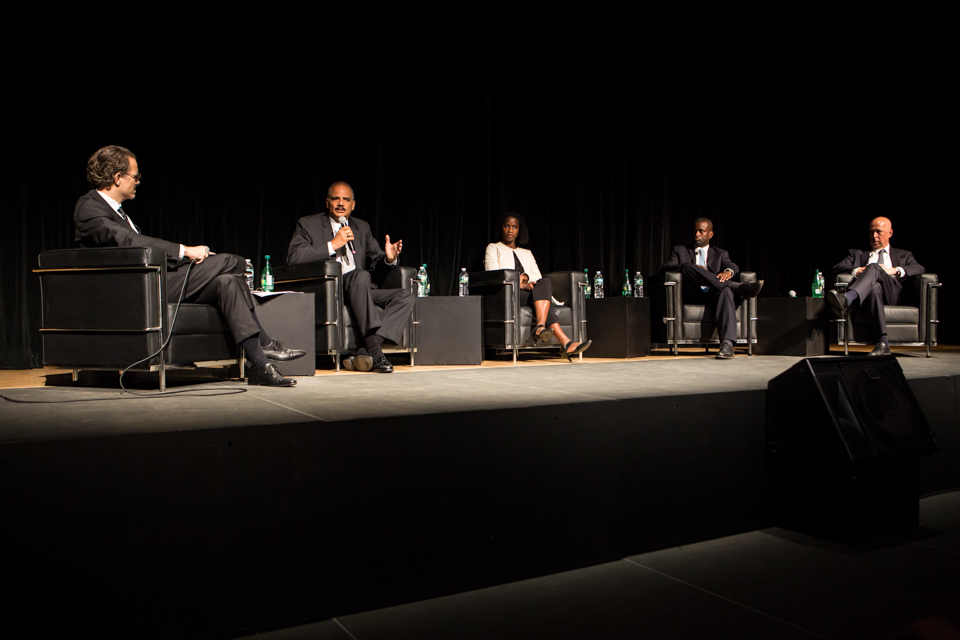 The four panelists express concerns over the future of civil rights, particularly affirmative action, voting rights, and the prevention of mandatory minimum sentences under the new composition of SCOTUS.

Former U.S. Attorney General Eric H. Holder Jr., CC ’73, Law ’76, alongside notable legal experts, reflected on the recent confirmation of Brett Kavanaugh to the Supreme Court and what this means for the future of SCOTUS rulings following the court’s shift to a conservative majority, at the semester’s first Holder Initiative event Wednesday evening.

“We all want to believe that the Court is more than just a third branch of government,” Liptak said.

The Eric H. Holder Jr. Initiative For Civil and Political Rights, founded in 2017, supports undergraduates interested in politics through events, scholarships, and sponsored courses. The panel was part of the American Voter Project series, which brings together notable speakers to discuss key matters of modern American democracy. This was the first Holder Initiative event of the semester.

Liptak opened the discussion by remarking on how, despite the protests and anger over Kavanaugh’s confirmation, little has changed among the atmosphere of the Supreme Court itself.

“I’m not sure that the Court is going to get away with it entirely,” Liptak said, “To pretend that [the attention on the Kavanaugh hearings] wasn’t something very significant to them.”

As the conversation transitioned to Kavanaugh’s political views, Johnson argued that the new justice will not have a long-term effect on future SCOTUS rulings. Though many experts believe that the Court will lean toward a more conservative stance with the appointment of Kavanaugh, Johnson held that the checks on SCOTUS by the other branches of the government will keep radical ideologies at bay.

“The issues around the Court are deep and long standing,” Johnson said. “This is not the first incident of politicizing the court and it will not be the last.”

The panel did, however, express concerns over the future of civil rights, particularly affirmative action, voting rights, and the prevention of mandatory minimum sentences under the new composition of SCOTUS.

“I don’t see any basis to believe … that anything positive will happen with regards to civil rights,” Holder said.

The conversation then turned to SCOTUS reforms, with Liptak blaming the intensity of the outcry over Kavanaugh’s appointment on the potential longevity of a lifetime appointment. The panel agreed that term limits would calm the hysteria over appointments and reduce the partisan nature of the court by taking away a judge’s control of which president replaces them, though the consensus among panelists was that the introduction of term limits would be unlikely.

“When we talk about Kavanaugh’s tenure, 30 years, 40 years, that’s a long time,” Greene said. “But when we talk about the composition of the court, that’s really unpredictable. Who knows what the future holds. The court is going to look different to how it looks now and we don’t know what direction [it will go in].”