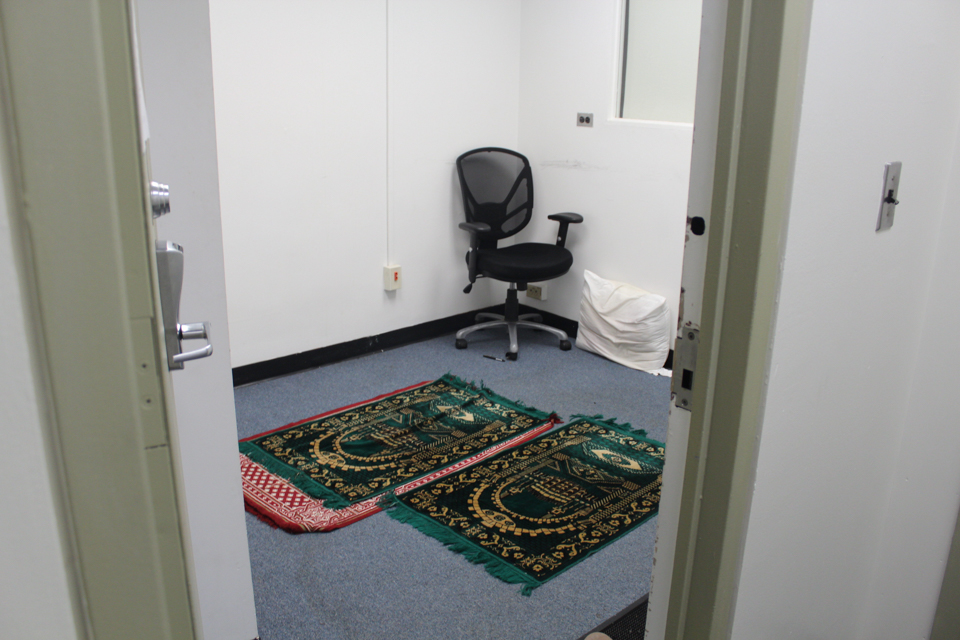 Aside from its maintenance concerns, the prayer space in Milbank is shared with the office and storage space of Barnard Bartending and contains two shopping carts filled with alcoholic beverages, along with bartending paraphernalia. In Islam, consumption of alcohol is forbidden.

The Muslim Students Association has launched a video campaign, using the hashtag #LetUsPray, advocating for improved prayer spaces at both Barnard and Columbia, citing concerns about cleanliness and maintenance, inaccessibility, and a lack of space in which female Muslim students feel comfortable praying.

Following years of student advocacy for a permanent religious adviser, which went unanswered largely due to issues with funding, Amina Darwish began her post as Muslim Life Coordinator in January. However, though MSA has been campaigning for improved prayer spaces for the same amount of time as for a permanent adviser, progress with seeing such improvements has been much slower.

According to a statement to Spectator from Darwish, a Muslim Life Steering Committee has been formed by Columbia administrators in response to the complaints raised by the MSA. The committee is comprised of Muslim students, Darwish, Chaplain Jewelnel Davis, representatives from Campus Services, and members of the maintenance team at Butler Library, where students are hoping to secure a new dedicated prayer space.

Currently, there are four prayer spaces available to Muslim students: a room in the basement of Earl Hall; a room in the 600 West 113th Street residence hall, also known as Nussbaum; a room in Milbank Hall at Barnard; and an open hallway that doubles as a yoga meditation space on the fourth floor of the Milstein Center.

Despite the existence of these spaces, Muslim students have argued that they do not adequately meet the current needs of the Muslim community. Some aspects of the prayer spaces have discouraged them from being used for prayer and have made students feel humiliated due to the lack of respect shown to holy spaces.

“It’s not a place I’d want any student to be in,” Yeliz Sezgin, BC ’21, the Student Government Association representative for food and dining services at Barnard, said. “It’s a health hazard. It’s filthy, the floor looks like it’s never been vacuumed, the Quran was just thrown in the closet, and there was a shoebox with broken glass in the closet.”

Students also cited moldy and crumbling ceilings and a single, yellowing pillow that had been in the room as long as they could remember. There had also been a fan in the room that went missing over the summer, rendering the room too hot for students to pray in.

In a statement to Spectator, Associate Dean for Student Life Emy Cardoza said Barnard’s Office of Student Life will work with Facilities to address the maintenance concerns.

Earl Hall’s prayer space is particularly hard to navigate for female Muslim students. Though Muslim prayer is traditionally conducted with a separation of the genders, the space allocated to women in Earl Hall is extremely small.

“The women’s prayer space in Earl is so small and so confined,” Mikyle Hassanali, the vice president of MSA, said. “There needs to be an equal prayer space.”

The Nussbaum prayer space is partially inaccessible to students, because the hours are limited and access requires being given a key. Similarly, a number of Muslim students have expressed confusion over the location of the space, often saying they had never used it.

Aside from its maintenance concerns, the prayer space in Milbank is shared with another room, which can only be accessed by passing through the space through a door at the back wall of the prayer room. This side room is the office and storage space for Barnard Bartending and contains two shopping carts filled with alcoholic beverages, along with bartending paraphernalia.

In Islam, consumption of alcohol is forbidden. According to Zawareen Zakaria, BC ’21 and author of the op-ed, the location of the bartending offices and stockroom within the Muslim prayer space was extremely offensive to many students. Many expressed that if they had been made aware that the prayer space was so close to such a large quantity of alcohol, they wouldn’t have felt comfortable praying there at all.

“I just thought it was a Facilities room,” she said. “Just walking in, I felt like crying, because everybody knows there’s a general rule. I just didn’t think they could ever do something like that.”

Concerns regarding the housing the Barnard Bartending offices within a Muslim prayer space have been communicated on two occasions: at the Student Government Association meeting on Oct. 8 featuring Barnard President Sian Beilock, and at the SGA town hall last week focusing specifically on issues regarding space. Beilock deferred the issue to Chief Operating Officer Rob Goldberg, and Student Life’s statement to Spectator did not acknowledge the issue with the location of the bartending office or any plans to move the office.

The most recently added prayer space is located on the fourth floor of the Milstein Center, which was opened in September. The space, located behind the staircase, has two new prayer rugs as well as new yoga mats.

According to Zakaria, the fact that the Milstein space is also set aside as a space to practice yoga speaks to a lack of support for Muslim students on campus.

“Yoga isn’t praying, and praying isn’t yoga,” Sezgin said. “Yoga is an exercise; you sweat. There are very different uses for both of these mats. To put them in the same space ties back into how you can’t have a Muslim prayer space connected to a bartending office with wine bottles. When creating the space, you need to think about what you’re equating. Bartending and prayer, yoga and prayer. Although the intention was not to equate them, you’re making a statement.”

While space is an issue at both Columbia and Barnard, the location of both primary Muslim prayer spaces in small rooms has sent the message to students that they are not supported by their institutions, according to Zakaria.

“You can put us in the basement,” Zakaria said. “But in taking us in, you become responsible when we take root and no longer be accommodated by the space you have given us. You can try to uproot us altogether, but in doing so maybe you’ll finally see the immense growth of the population you claim there is not a significant number of on this campus.”

According to Fatoumata Diallo, CC ’19, president of the Muslim Students Association, the ideal prayer space for students would be housed in Butler Library. The library already has 24/7 surveillance and security, which is one of the top priorities for the MSA in its search for an improved space.