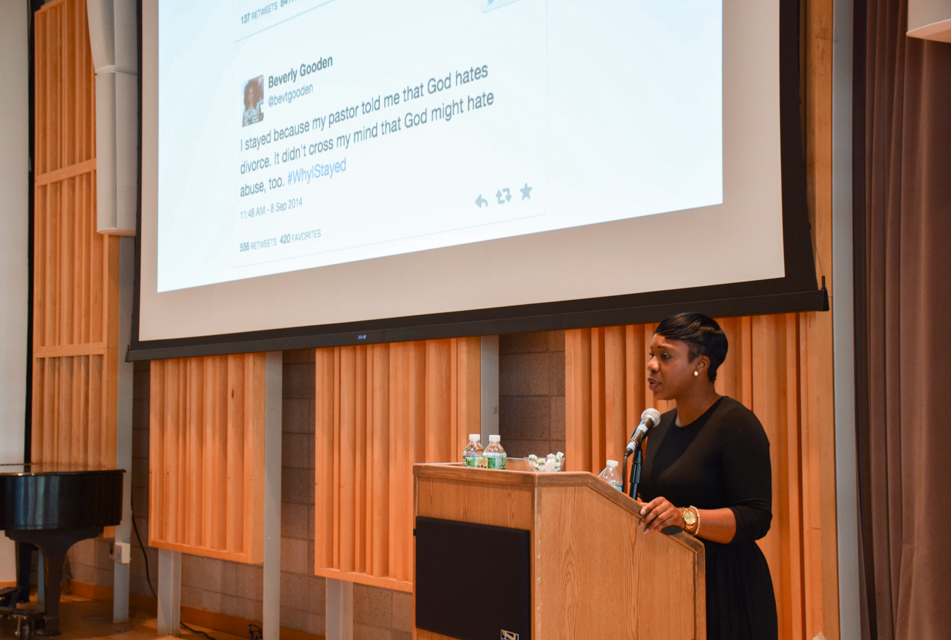 Beverly Gooden, an activist known for her groundbreaking work on domestic violence, spoke about the myths and misunderstandings surrounding domestic violence while explaining the complex reasons why victims might stay in abusive relationships at an event on Tuesday.

The event, co-sponsored by the Columbia University Ombuds Office, was the last in a series of events presented by Sexual Violence Response as part of National Domestic Violence Awareness Month. Earlier this month, SVR held additional film screenings and talks regarding healthy relationship practices.

A personal survivor of domestic violence, Gooden created the viral Twitter hashtag #WhyIStayed following the release of footage of NFL player Ray Rice beating his then-fiancee, Janay Rice, in 2014. After Janay Rice received backlash for staying with her ex-fiance, Gooden used the hashtag in order to share her own story and explain her reasoning for remaining with her abuser. Throughout the talk, Gooden focused on victim blaming in the context of domestic violence, particularly due to misunderstandings that she argued stem from a lack of conversation.

Gooden opened the talk with a short video clip of a severely battered woman trying to cover up the marks on her face with makeup in order to emphasize the importance of raising awareness of domestic violence among young people. According to Gooden, 57 percent of survivors who report experiencing dating violence said it occurred in college, and most people who experience some form of dating violence experience it before the age of 25.

“It happens in college, happens in high school. These kids can be as young as 12 years old, 10 years old. That is not good.” Gooden said. “We need to help those who are not equipped with the language [necessary to empower them to] identify behaviors that are violent.”

Gooden also shared her own experience as a survivor of domestic violence and highlighted the guilt and shame she felt for staying in an abusive relationship. Drawing from personal experience and scholarly research, she outlined the main reasons victims stay in these abusive relationships—financial dependence on the abuser, threats made by the abuser, and believing that love will conquer all—as well as the dangers that come with victim blaming.

“They go from telling their story to defending their story in a matter of seconds, and that’s why it’s so dangerous. It puts victims in a place of having to defend themselves when we should be seeking justice,” she said.

In particular, Gooden emphasized that certain groups—particularly black women and members of the LGBTQ community—are at a higher risk of domestic violence. For instance, the number one killer of black women between the ages of 15 and 34 is homicide at the hands of a current or former partner.

Gooden concluded the talk by discussing key methods of prevention and encouraged students to pay attention to the language they use, to feel and empathize with survivors, and to maintain an open dialogue about the issue.

“Where do you spend most of your time? Wherever that is, make that the place where you speak up … [where you] not only change the conversation but instruct the conversation,” Gooden said. “I feel hopeful when I see young people talking about these issues. … It makes it feel permanent now in a way that it didn’t before.”