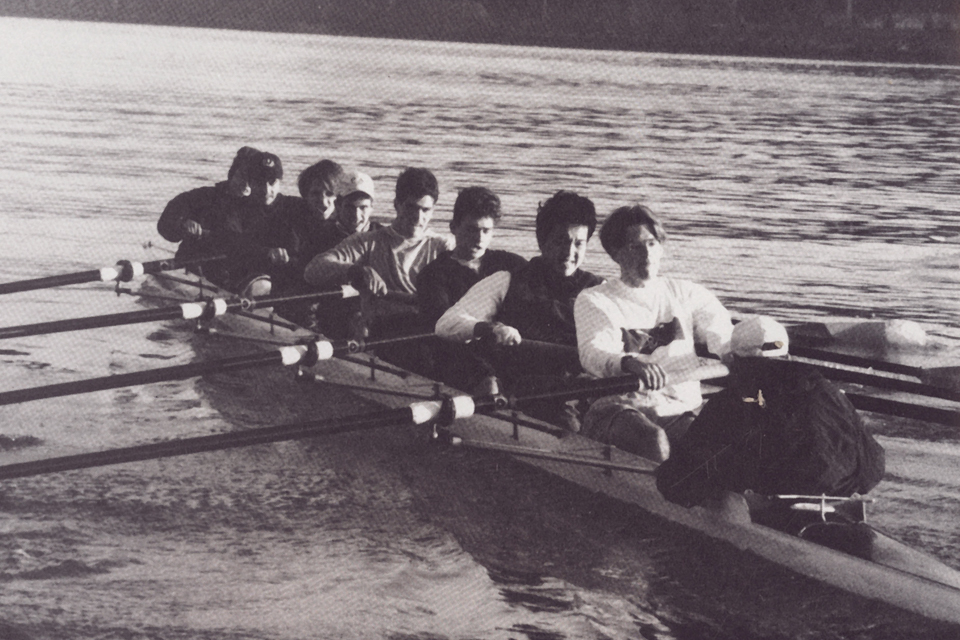 Beto O’Rourke CC’95, right, was the captain of the heavyweight crew team.

U.S. Representative Beto O’Rourke, CC ’95, was playing bass guitar in campus bars and rowing on the Hudson the last time Texas had a Democratic senator. Now, O’Rourke’s campaign for the 2018 Texas Senate seat—which has drawn national attention because of O’Rourke’s charisma and unapologetically progressive positions—may put a Democrat back in office.

O’Rourke, representing El Paso county, is vying for the seat of conservative incumbent Senator Ted Cruz, having outraised Cruz by $33.6 million. He has gained political celebrity for his grassroots campaigning, and his race may play a key part in determining whether Democrats retake control of the U.S. Senate.

Despite this success, none of O’Rourke’s former college classmates interviewed by Spectator described him as a student who showed any inclination to become a politician.

“There's a certain group of people that are political in nature, and they just have a hunger for that,” said Jordan Grant, CC ’96 and one of O’Rourke’s teammates on the heavyweight rowing team at the time. “He didn't strike me as that kind of person—he had real ethics, and he had a real sense of morality, but he was not a political animal so to speak. He was a kid like we were, and he was enjoying his time at a terrific institution.”

Instead of joining protests and writing op-eds, O’Rourke, an English major, rowed his way to captain of the heavyweight crew team, played in various punk rock bands, and passed time at campus haunts including the West End Lounge.

David Guinn, CC ’94, was involved in the arts scene with O’Rourke and lived with him after graduation. According to Guinn, O’Rourke’s moral compass, not his political ambitions, remains his defining trait.

“In my mind, he’s an artist at heart but was moved to enter politics in city council in El Paso and for Congress by issues and by conscience,” Guinn said. “I don’t think he was out to become a celebrity; that wasn’t his guiding principle at Columbia.”

Though not driven by politics or academics, O’Rourke’s friends described him as a motivated member of the Columbia community. Though the heavyweight team was a small program at the time, it still required significant commitment.

“We would get up at 5:30 a.m., when some of our classmates were just coming home from various raves around the city,” Grant said. “He was definitely committed; crew is a kind of sport where you can't just decide not to show up and somebody else takes your place.”

According to Grant, the two of them, unlike most of their teammates from elite New England schools, were walk-on athletes who had never rowed before. He said O’Rourke would get into spirited debates with his teammates who held more conservative viewpoints—the only mention of O’Rourke’s political activity in college from any of the classmates interviewed by Spectator.

Though currently there are multiple faculty members in the English department who taught when O’Rourke was a student and though many are enthusiastic supporters of his campaign now, none remembered teaching him.

Guinn, however, said he was not surprised by this. He described O’Rourke as interested in music and literature, but not as the type of student to make himself known to professors.

After graduating from Columbia, O’Rourke moved to Brooklyn with friends, including Guinn, staying in an industrial loft in Williamsburg that housed generations of graduates from Columbia’s artist community. In Brooklyn, O’Rourke wrote, played music, and worked a variety of odd jobs, including being a part-time nanny on the Upper West Side.

“As far as internships and what we were doing after graduation and stuff, at least in our group of friends, there was a sense of freedom and exploration,” Guinn said. “New York was such an exciting place, and we were going to see what was in the world to become part of.”

After several years in Brooklyn, O’Rourke decided to return home to El Paso, where he would become a city councilor and start his political career. Robert Holland, CC ’17, a Texas native and volunteer for the O’Rourke campaign, attributed this decision to run as O’Rourke’s dedication to his community.

“People that go to East Coast schools don't usually go back, but he really is representing Texas in that way by returning back and spending so much time in [that] community,” Holland said.

O’Rourke’s candidacy is enthusiastically supported by many current Columbia students, including Marion Gibson, BC ’19, a Houston native who went home this summer to intern for O’Rourke’s campaign.

Gibson reiterated that O’Rourke’s appeal has much to do with his genuine personality. One

time, when talking to O’Rourke while campaigning, Gibson mentioned that she attended Barnard. She said that O’Rourke laughed and asked if students still hang out at West End, a campus bar.

Gibson believes O’Rourke resonates strongly with students because of his belief in the power of young people.

“A lot of traditional campaigns will say, ‘don’t target young people, students don’t vote, students won’t put in the work, they are unreliable,’” Gibson said. “And the Beto campaign is like, ‘We want to invest in students.’”

“I think that Beto is the same person, even now that LeBron James is wearing his hat,” Guinn said. “When we talked this year and during the course of his career and when you watch his livestreams, he’s like the same guy that he was at Columbia.”