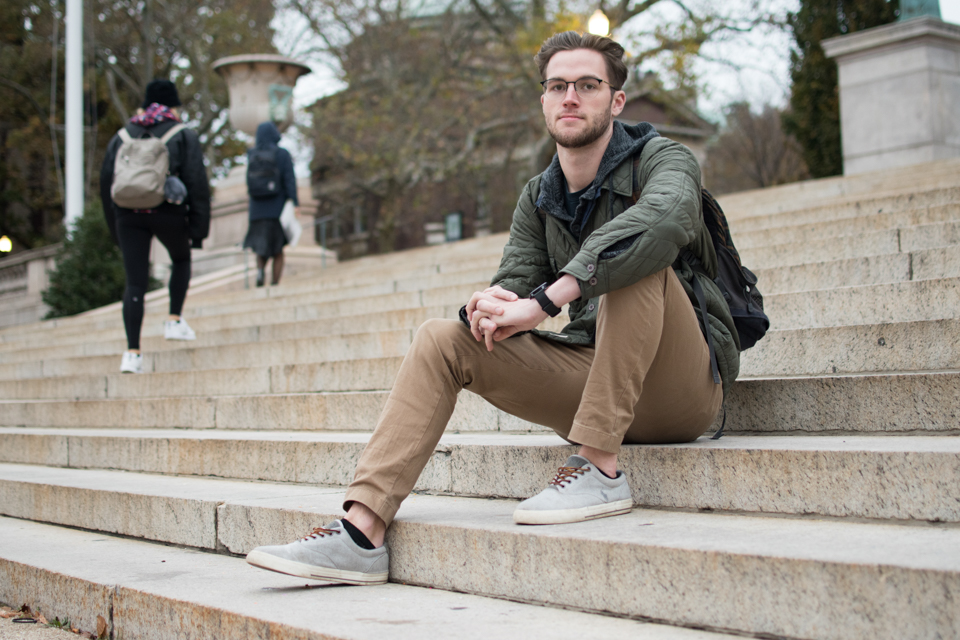 For Calvin Coffey, GS ’20, the threshold would potentially limit his flexibility with course offerings, because federal tuition funds only cover 12 credits per semester, which is also not enough to graduate after eight semesters.

Due to a reinstated policy that places holds on class registration for students unable to pay tuition up front, student veterans at the School of General Studies are faced with an immediate dilemma: They can either limit academic progress toward their degree or take out loans to pay off classes and expenses they can’t afford through federal VA grants.

Student veterans in the School of General Studies—who pay per credit, unlike other undergraduates—commonly encounter financial uncertainty, as their tuition and expenses rely on federal funding subject to frequent delays. Sometimes, as they await tuition payments and living stipends from United States Department of Veterans Affairs, veterans at GS must accrue significant amounts of debt in order to enroll in upcoming classes.

For decades, Columbia has offered an exemption to veterans for this reason, allowing them to enroll in courses despite outstanding balances that often exceed tens of thousands of dollars. However, according to an email sent by administrators, a lack of oversight meant students would, at times, accrue unmanageable amounts of debt.

As a result, the GS administration announced last March that Student Financial Services—an entity under the University’s central administration, distinct from GS administration—has chosen to end this exemption from standard University policy effective spring 2018, prohibiting students with outstanding balances greater than $1,000 from enrolling for courses. This exemption still accounts for delayed VA payments related to per-credit payments, but no longer allows room for accrued debt from other expenses or delayed housing payments.

“Considering the timeline getting so close to this hold, a lot of people are thinking, ‘Do I have to apply for loans to be able register for their classes, how much do I get approved for, how many different sources do I have to do that?’” Jacob Case, GS ’19, said.

Case, who is also financially supporting his family, faced accrued debt from his course load and a delayed MHA payment. According to Case, because the increased threshold of $7,000 was announced so late, he had already taken out unsubsidized federal loans to cover his remaining outstanding balance of $3,500.

“On top of that, it’s more than likely that students have multiple loans they have to get approved for, and each time, their credit score goes down,” he said.

Now, without the flexibility allowed by the exemption from the financial hold policy, student veterans are faced with the prospect of taking out loans for four months of rent, which Columbia Housing charges upfront. More than 200 student veterans will be impacted by the policy’s reinstatement, as they have accrued either “significant” or “very significant” debt, Director of Educational Financing Skip Bailey said at a town hall meeting on Nov. 7.

Many have also accumulated such a high outstanding balance because of expenses that cannot fully be covered by federal assistance, which can only pay for 12 credits per semester at GS, nearly 30 points short of the required 124 for graduation. Federal funding also does not cover the cost of other fees including the Columbia Health Fee.

Interviews with over a dozen student veterans demonstrate a widespread concern that the new policy will hurt the ability of currently enrolled veterans to continue their education, and may even deter potential future applicants. And for a number of students who have already accrued thousands of dollars in debt, the policy has left them scrambling to make payments in time for registration, which began this Monday.

While the University has offered solutions—namely, a higher threshold for outstanding balances of $7,000 to account for delayed stipends, and a payment plan for extreme cases—students were not notified of these options until Nov. 1, less than two weeks before class registration began, and after a number of students had already taken out expensive private loans themselves.

As of October, Jenna Marie Rackerby, GS ’20, hadn’t been paid by the VA in nearly six months and had racked up over $80,000 on her account balance over the spring, summer, and fall semesters. She then had to take out $25,000 in private student loans to supplement the monthly housing allowance she hadn’t been receiving from federal funding.

“If I would’ve been offered a payment plan, it should’ve been a month ago when I was in [GS’s Education Financing] office crying, trying to figure out how I’m going to register, but no one said anything,” Rackerby said in an interview on Oct. 18.

For next semester, GS is also uncertain whether it can continue to offer the higher $7,000 threshold for housing, and while a plan is in the works with SFS, there is no set date for when it might be announced, according to Bailey.

Bailey emphasized that any student with financial concerns in light of the policy change should make appointments with the Office of Educational Financing, and that even if online appointments are not available, students may set up after-hours appointments by phone. Currently, the online counseling system for the financing office displays no open in-person appointment slots for weeks, and the availability of officers is limited, with Tessie Scroggins, one of the two officers in the office, out on unanticipated medical leave since Oct. 31.

Crosby Kisler, GS ’19 and president of the MilVets organization, expressed concern that without any additional resources, the newly enforced policy could deter student veterans from taking advantage of their academic opportunities and thus deter them from enrolling. Kisler said he has been in close conversation with veteran student leaders and GS administration regarding the reinstatement of the balance threshold.

“There are people out there doing the exact right thing, but they just don’t have $8,500 sitting around to be able to pay at the beginning of the year to go ahead and register for classes. … If SFS continues to wallow in bureaucracy and slow-roll a viable long-term solution for us to attend school here, the veteran population will just decline because is it not an economically viable option to attend school here,” Kisler said.

For Calvin Coffey, GS ’20, the threshold would potentially limit his flexibility with course offerings, because federal tuition funds only cover 12 credits per semester. Coffey said he is currently at 14 credits this semester due to a four-credit major requirement and a four-credit language course for the Core Curriculum requirement. If Coffey dropped one of his other classes, he would have only 11 credits, qualifying him as a part-time student, which would proportionally reduce his stipend.

“You either take less money a month [in stipend] or you pay more [out-of-pocket], so there’s not really an easy way out it,” Coffey said.

During his first year, Dan Sendik, GS ’19, had accumulated a negative account balance of $8,000 from classes over the twelve covered credits. He said he was able to continue his education because the veteran exemption from financial holds allowed him to gradually pay off the balance through grant money and he did not have to resort to student loans.

“It’s really important for veterans who rely on payments that are not super reliable to have some safety in the Columbia structure. That safety is being taken away when they put another limit on veterans here. Not only do we have a 12-credit limit, but now we have a $1,000 account limit,” Sendik said.

Some students have trouble even qualifying for loans, according to Jennifer Blandón, GS ’19, the VP of the MilVets organization, who had to live off of credit two summers ago while awaiting her payments from the VA.

“Student veterans might not be able to take out loans because their education trajectory has taken so long and the process is so slow that they’ve had to go and do this so many times already, paying out of pocket until [the VA] ends up paying,” Blandón said.

Kisler described a familiar frustration from student veteran community in response to bureaucracy problems, but said he hopes that this will serve as an opportunity for the University to be more empathic.

“We left the military thinking we were going to become more than just a number on a spreadsheet. … The real issue right now is the nameless, faceless numbers on a spreadsheet that exists inside 131st Street at [the] SFS building. Let’s go ahead and provide an example of cutting through the bureaucracy. … This has the potential to be a shining example of how Columbia can act and respond in a way that’s forward-thinking and takes care of its students.”