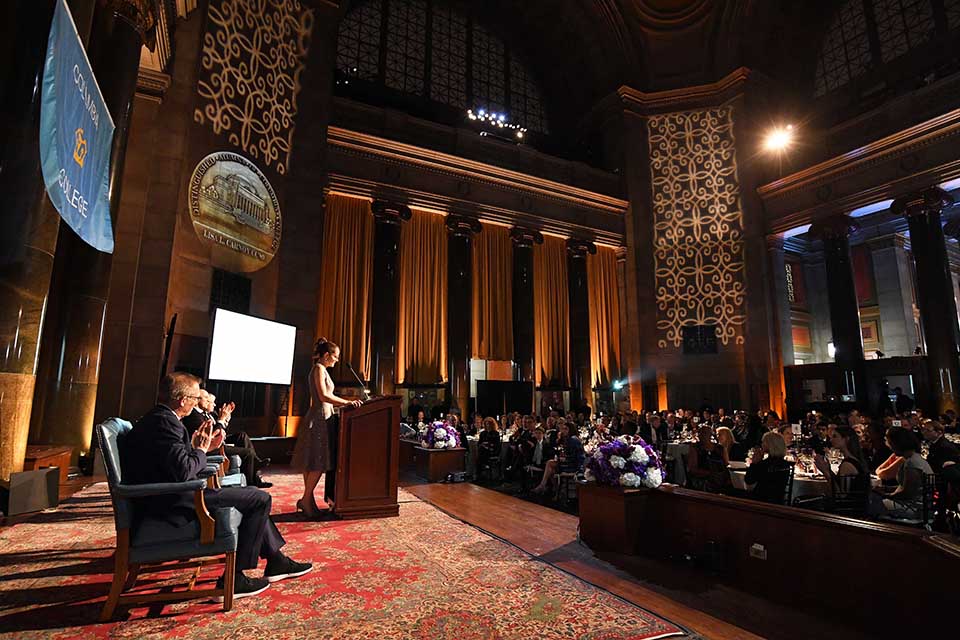 The Alexander Hamilton Dinner, an annual fundraising event for the college that was held in Low Library on Thursday, garnered $1.25 million this year.

When Lisa Carnoy, CC ’89, moved into her room on the eighth floor of Carman Hall in 1985, she was a member of the third class of women to be admitted to Columbia College. Over three decades later, she became the first woman awarded the college’s highest honor, the Alexander Hamilton Medal.

The Alexander Hamilton Dinner, an annual fundraising event for the college that was held in Low Library on Thursday, garnered $1.25 million this year.

Carnoy, who became co-chair of the University’s board of trustees earlier this year, currently serves as the chief financial officer of AlixPartners. Carnoy has been heavily involved with the University since she graduated, specifically focusing on initiatives such as the Women’s Leadership Council for Athletics and participating on the steering committee of the college’s fundraising campaign, Core to Commencement.

In a video shown at the dinner, Carnoy’s co-chair on the board of trustees and last year’s winner of the Alexander Hamilton Medal, Jonathan S. Lavine, CC ’88, said that Carnoy “never settles for second best. She makes everyone better.”

Dean of Columbia College James Valentini also spoke, noting that Carnoy is “always pushing the college to do more and be more,” and that she was instrumental in the conception of Core to Commencement, specifically pressing for a campaign to endow the Core Curriculum.

When she accepted her award, Carnoy spoke about how the faculty she interacted with during her time at Columbia inspired her, and said that Columbia’s faculty “were and are spectacular.”

She also spoke about what she has accomplished at the University since graduating.

“Over the years, I have learned to stand up for what I believe in, from keeping Music Hum classes small to bringing ROTC back to campus,” she said.

Carnoy received the most applause when she called upon the female attendees and alumnae of Columbia College to stand and be recognized during her speech.