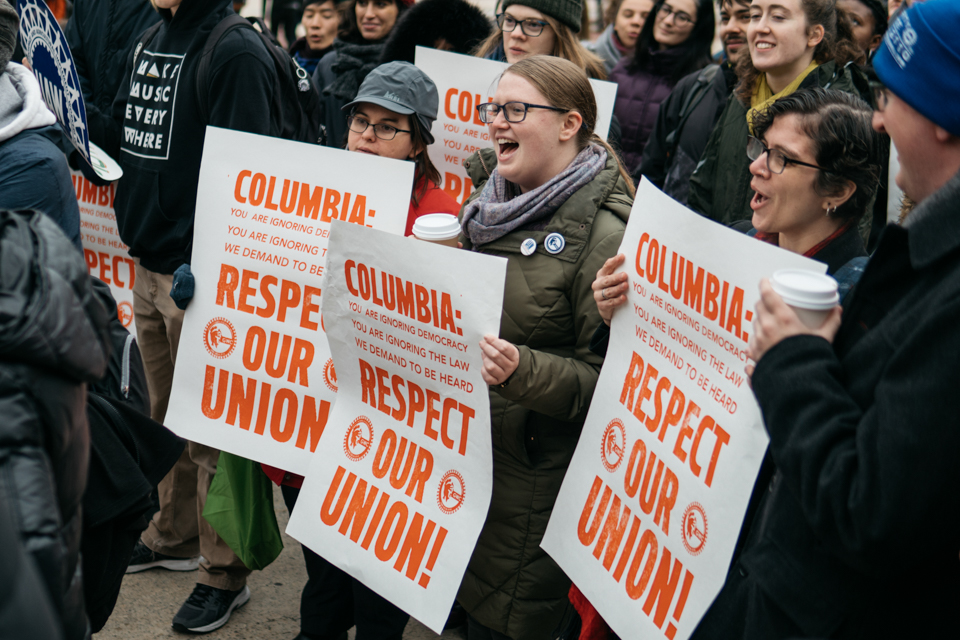 Demonstrators gather around Alma Mater at a GWC-UAW rally on November 15.

Graduate and postdoctoral unions have voted 1035 to 720 in favor of ratifying Columbia’s bargaining framework, marking the beginning of negotiations after decades of stalemate and ending the possibility of a graduate student strike.

Columbia announced the bargaining framework with guidelines for contract negotiations—including a clause preventing further strikes until April 2020—on Nov. 19, two weeks before before a Dec. 4 strike deadline set by the graduate student union.

While it officially opens the door for negotiations between the two unions and the University, many lines in the framework agreement—particularly those protecting Columbia’s exclusive right to manage its academic decision-making and educational and research mission—leave room for further interpretation and debate.

Citing high turnout for the ratification vote, Trevor Hull, graduate student union bargaining committee member, said that while he was disappointed in Columbia’s delayed response, he looked forward to the united effort and potential for both unions moving forward.

“I’m excited to bargain after four years of waiting for Columbia to do the right thing… It’s very clear that the reason this happened is because the strike... I hope that [administration] understands they need to come to the bargaining table to build some trust,” Hull said.

The framework comes as the culmination of years of back-and-forth between the University and graduate students, who have fought to be recognized by Columbia since the National Labor Relations Board overturned a historic precedent in their favor and officially gave graduate students across the nation the right to unionize. However, alleged closed-door conversations between United Auto Workers—the national labor union representing both postdocs and graduate students—and the University regarding the agreement prior to its announcement drew criticism from some members of both unions, who cited concerns over a lack of agency in the decision-making process.

Upon ratification of the framework, both unions agree to move forward and negotiate with Columbia in good faith. Specific terms outline that the Graduate Workers of Columbia and Columbia Postdoctoral Workers are the exclusive bargaining representatives on rates of pay, wages, and employment conditions, but that no collective bargaining agreement can infringe upon the integrity of Columbia’s academic decision-making or its mission as an educational and research mission.

The framework also specifically says that in light of good faith bargaining, neither union may “authorize or condone any strike, sympathy strike, work stoppage, slowdown, or other interference with Columbia's operations by employees covered by this Agreement” until April 6, 2020.

A document of pros and cons released by the graduate student union outlined concerns with the “no-strike” clause and the lack of clear boundaries around what may constitute Columbia’s academic jurisdiction, but noted that both unions have the right to negotiate and strike if good-faith negotiations do not occur, as this would be a violation of the bargaining framework.

“I’m excited that we’re finally participating in this democratic process of unionization and negotiation... Whatever Columbia tries to do, we will respond with great energy and unity, and we’re going to keep coming back strong and growing,” Hull said.