How does Columbia’s bargaining framework with the union stack up to those at other universities?

How does Columbia’s bargaining framework with the union stack up to those at other universities? 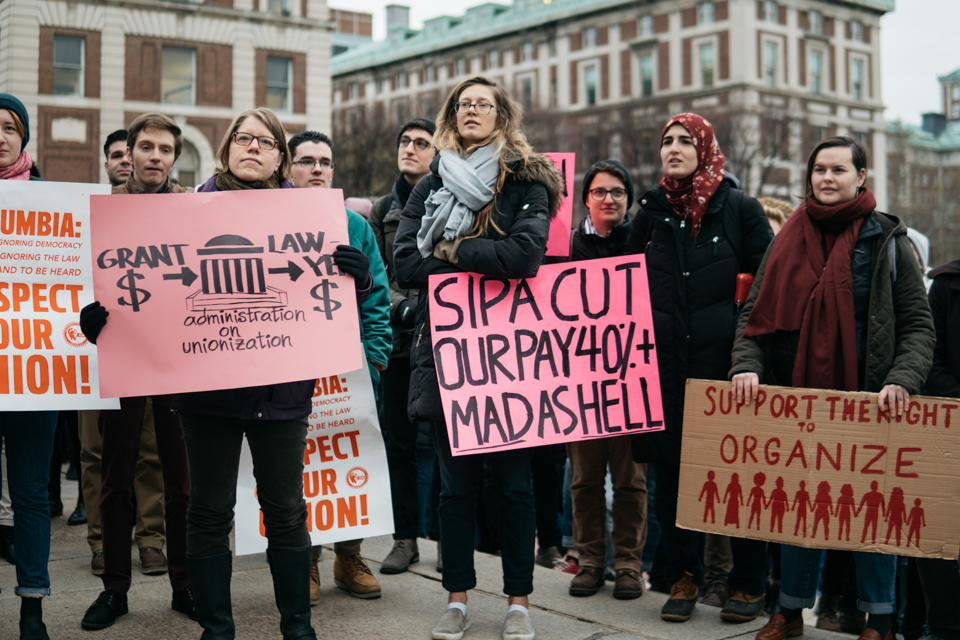 Columbia’s decision to recognize its graduate student union follows a similar move by the administrations of several other private institutions, including Harvard, Georgetown, and Brown.

Columbia’s pre-bargaining framework with postdoctoral and graduate student unions—the first unions of their kind to have a legally binding agreement with a university prior to any bargaining efforts—treads into little-explored legal territory, introducing questions about where to draw the line between academic and labor issues, according to legal experts. The framework also does not guarantee a contract resolution, meaning that the promise to bargain does not necessitate a legal contract for either union.

Graduate students and postdoctoral workers voted to ratify the administration’s proposed bargaining framework over two years after the union was officially recognized by the National Labor Relations Board and one week before what would have been the start of an indefinite strike. The bargaining framework provides a 10-point outline of the conditions for collective bargaining, which includes, most notably, a provision that prevents the union from striking until April 6, 2020. This clause has been a point of contention among graduate students, who express concern that the inability to strike will weaken their capacity to bargain effectively.

Official negotiations between Columbia and the two unions must begin by February 2019, the framework mandates.

Columbia’s decision to recognize its graduate student union follows a similar move by the administrations of several other private institutions—including Harvard, Georgetown, and Brown—although there remain questions on how to navigate such new legal territory. Currently, the only examples of official contracts between graduate students and universities are those at Tufts, Brandeis, NYU, and the New School, though none of these contracts were reached with specific pre-bargaining frameworks. 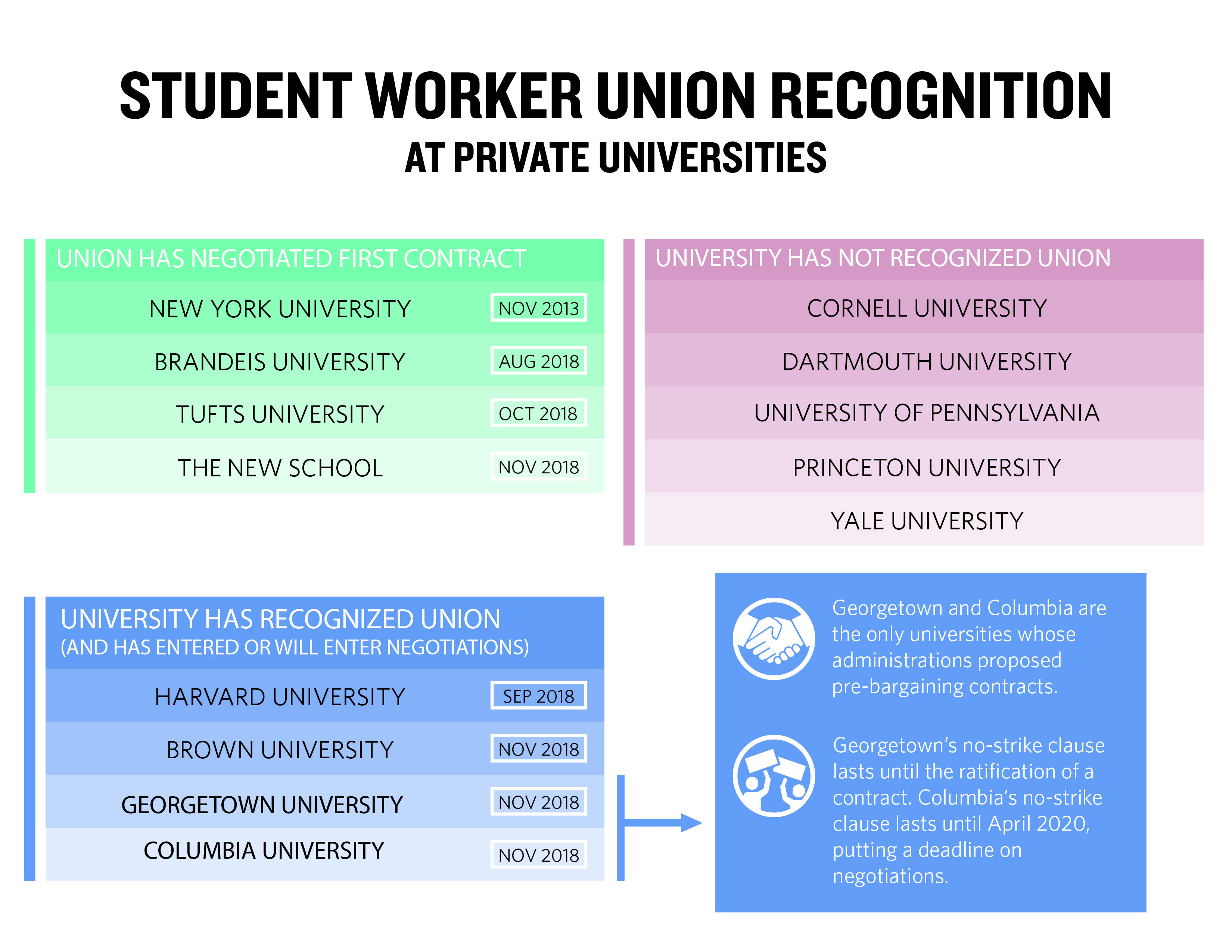 Furthermore, the only existing precedent of a pre-bargaining framework was set by Georgetown’s agreement with its graduate student union, which was formed after the administration allowed its graduate students to unionize without an official decision by the NLRB.

Former chairman of the NLRB William B. Gould IV also noted that it is unusual that Columbia’s framework lacks a path towards dispute resolution if collective bargaining does not yield a contract; typical examples of dispute resolution include the promise to delegate the determination of an ultimate contract agreement to outside arbitrators. If the two sides do not agree to a contract by April 2020 the union is reauthorized to go on strike, but this still does not guarantee that a contract agreement will be reached.

“The problem is with the absence of any kind of dispute resolution mechanism, the union could be left high and dry at the end of the day,” Gould said.

And a contract is far from guaranteed, according to Gould, as several elements of the framework remain ambiguous. For instance, it’s unclear what “interference with Columbia’s operations” means in the context of a union advocating for its goals, and what constitutes breaking “good faith” status. A University spokesperson declined to comment on the nature of the framework.

Columbia’s framework, which includes a no-strike clause that prohibits all such activity until 2020, falls in line with the bargaining framework model set last spring by Georgetown’s administration.

While some worry that the no-strike clause will weaken both universities’ capacity to bargain effectively, and set a negative precedent for all future negotiations from graduate student unions, the results remain to be seen—Georgetown only ratified its framework earlier this month. Unlike Columbia’s framework, however, Georgetown’s pre-bargaining agreement also set an indefinite prohibition to graduate student striking, and its union was recognized outside of National Labor Relations Board processes; the university voluntarily agreed to bargain from the start.

As the two sides move forward with labor negotiations, the University has asserted that it will maintain the exclusive right to manage its academic decision-making and educational research mission. The question of what constitutes “academic decision-making” has left experts unsure of which topics may be addressed in contracts with graduate student unions across the nation, according to Sharon Block, former board member on the NLRB and CC ’87.

“There may be a difference of opinion between the school and union over whether [something] is an academic issue or an issue over which they’re open to bargaining. There’s that complication. In terms of how this plays out in the bargaining, it’s going to depend on how it comes up, and what the circumstances are,” Block said.

Many questions and goals will be brought to the bargaining table come February, but Block said that the University’s proposal can serve as an opportunity to build a stronger relationship between graduate students and the administration, as long as all parties involved bargain in good faith.

“The process of collective bargaining, if both parties come into the spirit of building trust and a better relationship, can work, and they can create a work environment at the other end. I’m a Columbia alum, I also share that care of institution and the people in it. I think it’s great that they’re going to move forward in that way,” Block said.

Dan Bowling, a lecturing fellow at Duke Law School focusing on labor and employment law who has been following Columbia’s case closely, feels strongly that despite the complications that may arise in bargaining, the two sides will ultimately come to an agreement.

“Right now it looks promising for the graduate workers. I don’t think Columbia would have agreed to withdraw its challenges to the NLRB ruling if it did not intend to put this behind them,” Bowling said.